The government is looking to offer loans worth $39 Bn to small, medium businesses 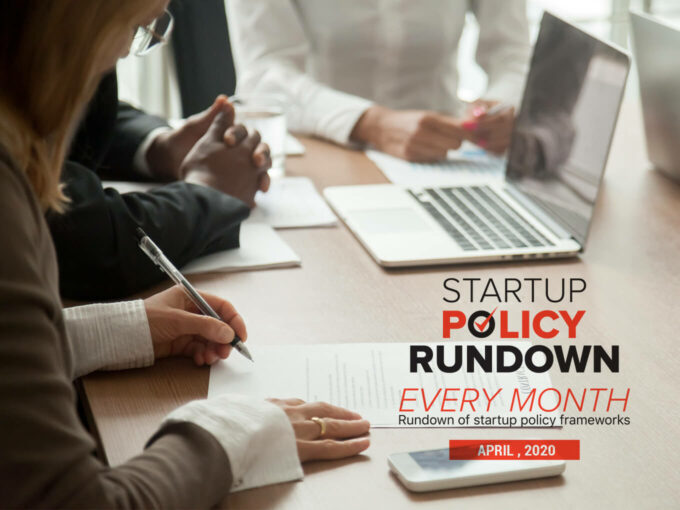 India spent the entire month of April in a complete lockdown. With revenues severely impacted, many startups are now facing tremendous pressure of paying salaries to employees while keeping operations running smoothly. And while the government has extended the lockdown till May 17, there’s a grave need for policy to fight back the economic impact of the pandemic. However, the government has now come up with certain relaxations which could help revive business and bring some startups back on the revenue track.

For instance, ecommerce platforms such as Amazon and Flipkart can deliver non-essential products in orange and green zones. Cab aggregators can also operate in these zones but with certain restrictions.

Meanwhile, Prime Minister Narendra Modi stressed on the importance of reviving the economy by strengthening the Make In India programme and boosting the manufacturing sector. The government plans to aggressively push for the programme by offering domestic and foreign manufacturers policy and fiscal incentives to manufacture locally.

Along with this, the government is increasing import duty to make bringing in products expensive. It is also working on measures to encourage local entrepreneurs to challenge ecommerce giants such as Amazon and Walmart-owned Flipkart.

The government’s focus is to boost manufacturing and services while generating jobs. Multiple companies are seeking alternatives to shift their manufacturing base from China to India.

In a bid to revive the economy reeling under the impact of the Covid-19 pandemic, the government is looking to offer loans worth $39 Bn to small, medium businesses (SMBs).

Under the new proposal, the government is looking to offer an additional 20% of credit limit to small firms. The extra debt will be fully backed by the central government, which will also set up a special fund to pay for any default.

Meanwhile, union minister Nitin Gadkari proposed a separate INR 100K Cr fund to repay pending tax dues of MSMEs. The fund will help MSMEs to mitigate the revenue impact as the pressure for wages is mounting on them.

In response to the government’s plan to bring a new digital tax, which will impact tech giants like Facebook and Google, nine lobbying groups have urged the government to delay the rollout as they are already facing disruptions due to the coronavirus outbreak.

The Indian government imposed a new 2% tax from April 1, on all transactions for digital services, where foreign companies take the money out of the country. Ecommerce platforms such as Amazon also need to pay this digital tax.

US authorities have urged the government to reconsider many clauses in its current draft policy. The US has also mentioned that the digital tax imposed on international online advertising platforms may increase the risk of retaliation from other countries, where Indian startups and companies are doing business.

MeitY Relaxes Work From Home Norms For IT Cos

The information technology ministry has extended the relaxation of the VPN connectivity norms for IT companies until July 31. The move is likely to simplify work from home for IT companies.

IT minister Ravi Shankar Prasad said on Twitter that in response to IT Industry’s request to facilitate work from home for open settlement protocol, the department of telecommunications had relaxed terms and conditions for VPN till July 31 after discussions.

To ensure the supply of essential goods amid lockdown in rural areas, the government has decided to work with nearly 2,000 common service centres. Over 3.8 Lakh CSCs across the country reach to more than 60 Cr people.

Villagers can go online and order supplies through an app that has been provided to village-level entrepreneurs (VLEs) or those given the charge of retail and other CSC activities.

To help state governments earn excise revenues from the sale of alcohol, the Confederation of Indian Alcoholic Beverage Companies (CIABC) suggested central and state governments to allow the home delivery of alcoholic beverages through an application or a website.

Meanwhile, All India Brewers’ Association (AIBA), along with leading beer manufacturers Bira, Carlsberg, United Breweries and Molson & Coors, knocked the doors of the state governments of Maharashtra, Goa, Kerala, West Bengal, Haryana and three other states. They are seeking permission for an ecommerce portal to sell beer as the industry faces massive losses due to the lockdown.

Last month, discussions over what commodities are essential and which are not spurred major controversies, with many companies urging the government to rethink the list. To solve the issues, the government held discussions with ecommerce players and other stakeholders on whether items such as smartphones, electronic devices and other internet equipment should be considered essential.

On April 21, DPIIT asked ecommerce companies to submit a list of limited items that can be considered as essentials under the lockdown rules. The move was followed by apprehensions expressed by ecommerce majors following a notice issued on April 19 which ended any hopes of a resumption in April. All ecommerce platforms companies have had to go the full month without any non-essential deliveries. Meanwhile, the government allowed the opening of non-essential selling stores in societies from April 25.

The central government issued a fresh set of orders for ecommerce players in mid-April to curb the spread of the Covid-19 pandemic. The new rules make it mandatory for the ecommerce companies to install the Aarogya Setu in mobile devices off all its staff. The app is being used by the government to trace the spread of the pandemic and educate people on the deadly virus.

FDI From China, Other Neighbouring Countries Under Scrutiny

In one of the most controversial decisions in April, the department for promotion of industry and internal trade (DPIIT) revised the rules of foreign direct investment (FDI) to curb opportunistic takeovers or acquisitions of Indian companies and tech startups by Chinese investors and corporations due to the current COVID-19 pandemic.

In a notification, DPIIT highlighted that an entity of a country that shares a land border with India can invest in Indian companies only after receiving government approval. This means all investments from these countries will be under the scanner too. The government has been working on these guidelines since the second half of 2019 due to security concerns arising from Chinese investments.

The government noted that in the Covid-19 crisis, such investments might see a hike, especially in the healthcare, pharmaceuticals and real estate sector, along with the supply chain management.

In response, Chinese authorities said that additional barriers, set by India on investment activities from specific countries, are in violation of the World Trade Organisation’s (WTO) principle of non-discriminations. China also highlighted that the guidelines are also against the global trend of liberalisation and facilitation of trade and investment.

In a major relief to around 14 Lakh taxpayers, the Income Tax Department announced that it will issue all pending tax refunds up to INR 5 Lakh immediately to individuals and business entities. The press note shared by the ministry of finance also said that all pending GST and custom refunds will also be released, benefiting close to 1 Lakh businesses. The total refund amount will be to the tune of INR 18K Cr.

Following the announcement, several startups received a notification from the income tax department saying that the startup will receive the due tax refund. However, several founders of startups complained that the department has said that the refund would be adjusted against the pending angel tax.

Many believe that nothing is happening with angel pending cases due to government offices being semi-functional because of the lockdown. Therefore, adjusting IT refund against pending angel tax amount will be unjust to startups. With most such cases pending in the tax tribunal and courts, the notification from the government drew flak from startup founders and investors. Some founders even complained that assessing officers had wrongly calculated the expenditure as part of income which they have contested in the past multiple times.

In response, the central board of direct taxes (CBDT) issued a press release citing that these emails were part of the faceless communication which protects public money by ensuring that refunds are not released without adjusting against outstanding demand if any.

The Employees Provident Fund Organisation (EPFO) and Employees State Insurance Corporation (ESIC) decided to keep a record of all the developments related to layoffs and salary cuts.

The two bodies, under the labour ministry, are preparing a report which would be presented to the Prime Minister’s Office (PMO). The data collected will give insights on the worst-affected sectors and the employees impacted by the closure of establishments. The target group for these exercises is fairly large as EPFO has over 60 Mn subscribers, including pensioners, and ESIC has over 30 Mn subscribers. However, there are also some overlaps between the two data sets.

The government wants to make IT relevant to current times as there have been several technological advancements that need to be brought under the ambit of the act. In an email, DPIIT has asked the organisations and industry bodies to share their studies, committee reports, court advisories, and global best practices on IT Acts.

As two different ministries — IT ministry and consumer affairs ministry — of the central government are working on two separate ecommerce policies, many are of the purview that government might overlap some rules. This can complicate the functioning of ecommerce companies in India.

However, the government clarified that both the ministries are in regular contact with each other so that there are minimum overlaps in the two bills. These policies are expected to regulate companies such as Amazon, Flipkart, Snapdeal and more.

In a notification dated April 30, the government extended the scheme for facilitating Startup Intellectual Property Protection (SIPP) for a period of three years with effect from April 1, 2020, to March 31, 2023. SIPP protects patents, trademarks and designs of innovative startups.

However, the government has amended certain provisions related to SIPP. The government has proposed that facilitators shall be empanelled by the controller general of patents, designs and trademarks (CGPDTM) for effective implementation of the scheme. The CGPDTM shall regulate the conduct and functions of empanelled facilitators from time to time.