Rajeev Misra, the chief executive officer of the $93 Bn Vision Fund has been elevated to the position of executive vice-president of the SoftBank board of directors. SoftBank launched Vision Fund in January 2017.

The move instates Rajeev Misra in the club of potential successors of Masayoshi Son. The position was once hinted to be reserved for the ex-president of SoftBank Global, Nikesh Arora.

According to media reports, Misra is among at least three senior executives who could succeed Son when he steps down. The SoftBank Group has also promoted Marcelo Claure, chief operating officer, and former Goldman Sachs senior executive Katsunori Sago as executive vice-presidents. Misra was elevated to the board of the SoftBank Group in May 2017, along with other candidates including Marcelo Claure, president and CEO of Sprint Corporation, Simon Segars, CEO of ARM Holding Plc, Mark Schwartz, senior director of Goldman, Sachs and Co, and Yassir O Al-Rumayyan, managing director and board member of the Public Investment Fund (PIF) of the Kingdom of Saudi Arabia.

To be noted, Claure took over as COO in April this year, a role formerly occupied by Nikesh Arora, who left the company in 2016 amid severe accusations of conflicts of interest and a regulatory probe. 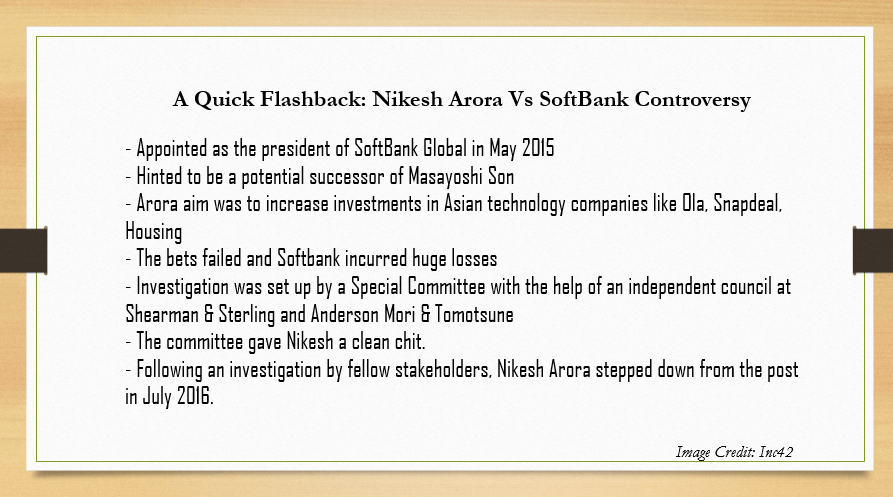 The appointments are subjected to the approval of shareholders at SoftBank’s upcoming AGM to be held on June 20, 2018. Further, in response to a media query, a SoftBank spokesperson said, “Son’s potential successors are not limited to these three, but they are among them.”

While its earlier bets in India incurred huge losses, the company recently made a successful exit from Flipkart, in which it had invested over $2 Bn last year against a 23.6% stake in the company. The Indian ecommerce unicorn sold a 77% stake to the US retailer Walmart for $16 Bn, wherein SoftBank took a full exit.

In more than 12 months, SoftBank’s Vision Fund has made investments of about $5 Bn in Indian companies such as Paytm, OYO, Flipkart, and Ola. With Rajeev Misra climbing his way up the Group’s ladder, the Indian startup ecosystem is sure to hope that his elevation further improves the position of startups, which are drawing billions in investments from the Japanese conglomerate.