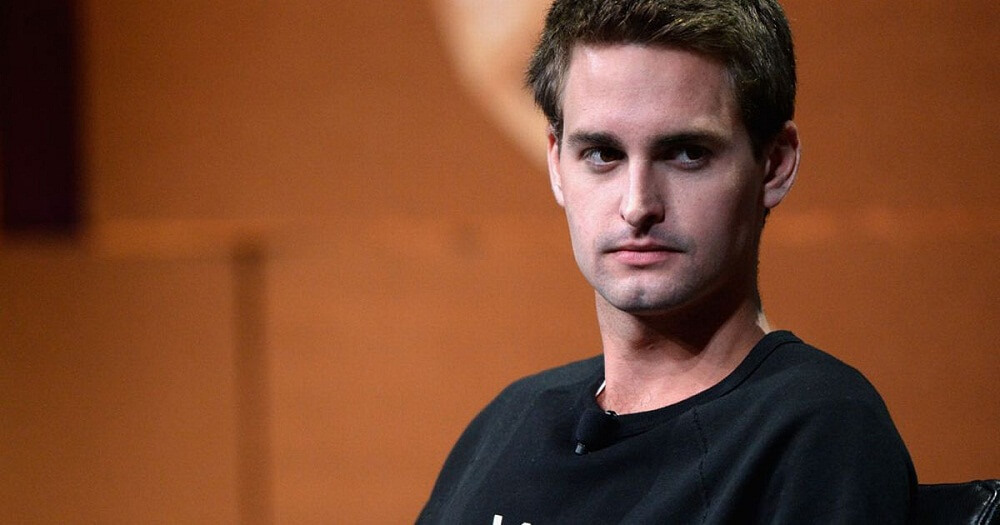 The last thing beleaguered ecommerce company Snapdeal needed was another controversy. Yet that’s exactly where it has found itself in – albeit this time through no fault of its own. The online marketplace, which is in the middle of a sale to rival Flipkart, was caught in the crossfire of citizens reacting to Snapchat CEO Evan Spiegel’s “poor India” remark, and erroneously venting out their anger on Snapdeal’s app instead of Snapchat’s.

It all started with ex–Snapchat employee Anthony Pompliano’s interview in Variety magazine wherein he states that when he had expressed concern in September 2015 that the app was not taking off overseas, Evan had cut him off by saying, “This app is only for rich people. I don’t want to expand into poor countries like India and Spain.”

The interview tells the story of his brief, three-week tenure at the company, during which he says he learned that the company exaggerated its user data and that top executives were “completely misinformed” about key metrics.

Pompliano’s alleged comments about Evan disparaging India went viral in the last few days and led to Indians boycotting the app on social media, uninstalling the Snapchat application, rating it poorly on the respective app stores, and lashing out on Twitter and Facebook. The instant image sharing application’s ratings even dropped to one star on the app store following the uproar.

Meanwhile, Snapchat has denied these allegations and the charges made against CEO Evan Spiegel, terming them “ridiculous.” In a statement to Factor Daily, the company said, “Those words were written by a disgruntled former employee. We are grateful for our Snapchat community in India and around the world.”

People Snap At Snapdeal Instead Of Snapchat

While this controversy raged on, Snapdeal became an unlikely victim of the Indian people’s ire. Many users who never installed or have uninstalled the picture-sharing application after the comment went on to Google Play and Apple’s App store and mistakenly down-rated Snapdeal instead of Snapchat. They even went on to delete the Snapdeal app.

#BoycottSnapchat became one of the top trending topics on Twitter but  people actually began to uninstall the Snapdeal app and give it poor ratings and reviews on various app stores. This came to light after netizens started posting pictures of the blunder on Twitter. Many users also went on to explain how the two apps were different. As more and more people unleashed their vitriol on Snapdeal, co-founder Kunal Bahl eventually stepped in and stated, “People asking us to make a statement that @snapdeal is not @snapchat was possibly the last thing I thought I would ever need to do.”

Thanks bud. Ppl asking us to make a statement that @snapdeal is not @snapchat was possibly the last thing I thought I would ever need to do.

The ridiculousness of the situation aside, this snippet is funny beyond belief. https://t.co/G2oEomZjQh

However, what’s ironic is that last year, Snapdeal had spent $30 Mn (INR 200 Cr) to overhaul its brand and unveil a new logo. Discounting the current state of its fortunes nevertheless, this case of mistaken brand identity with Snapchat questions the effectiveness of the rebranding exercise.

Freecharge founder Kunal Shah also made a pertinent point on Facebook  when he stated, “If a global CEO is accused of calling users of your country poor to expand its app base, you have two choices: 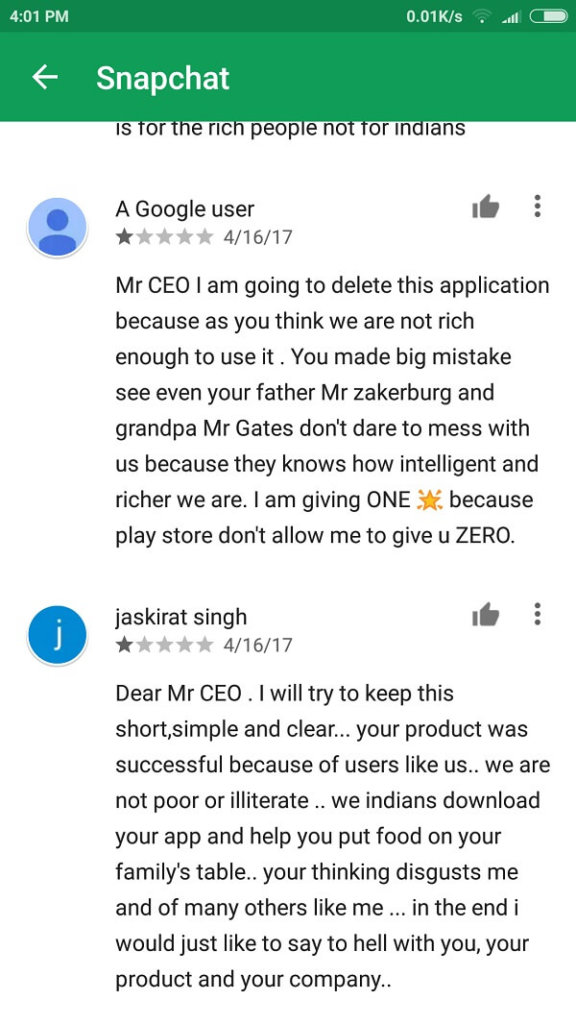 Today however negative reviews on the Snapdeal app regarding the controversy could not be found. Incidentally, Snapdeal had been at the receiving end of similar misdirected consumer ire in September 2015 as well when its ambassador Bollywood actor Aamir Khan made a political statement on the growing intolerance in the country.

It will be interesting to see how Snapchat reacts to pacify their belligerent Indian user base. While it is not as popular as Instagram and Facebook in India, given the fact that India’s digital population is burgeoning (will reach 450 Mn by June 2017) it is high on the radar of every tech company. While Evan’s intent may have been to say that India as a market might be not so well for Snapchat to monetise, given that it is primarily dominated by Android devices, while most user engagement for the app happens on iOS, his apparent choice of words two years ago has put the app in a soup. Even in India, Snapchat’s user base is estimated to be around 4 Mn.

More so, Snapchat is facing intense pressure from rival Instagram after the photo-sharing app introduced an almost identical set of features – including Insta Stories, localised stickers etc. In the 25 weeks after its launch, Instagram Stories reached 150 Mn daily users, which is the same number of users that Snapchat’s app reportedly hit around June 2016. Currently, Snapchat has 158 Mn daily active users and derives its primary growth from the teen population in the US.

Last month, Snapchat’s parent company – Snap Inc – raised $3.4 Bn through an Initial Public Offering (IPO).  However, losses at Snapchat surged to 38% last year. The pressure from Instagram is also evident from the fact that the San Francisco-based company recorded its lowest percentage growth quarter since the beginning of its publicly available data in 2014. Besides Snapchat, Snap Inc develops and manufactures the wearable camera called Spectacles, a pair of smart glasses that connect to the user’s Snapchat account and records videos in a circular video format adjustable in any orientation.

Meanwhile, ratings continue to slide in India. As per Bangalore Mirror, according to the app info on App Store, the “Customer Ratings” of the current version of the app was “single star” (based on 6,099 ratings) and all versions rating were “one and half star” (based on 9,527 ratings) as on Sunday morning.

And it doesn’t stop here.

An India Today report stated that anonymous Indian hackers claim to have leaked the database of 1.7 Mn Snapchat users, which they hacked last year to show resentment against Evan Spiegel’s remark. As per the hackers’ claims, they had found the vulnerability in the Snapchat database last year and had accessed details of 1.7 Mn users. However, Snapchat has not confirmed any successful hack and leak yet.

While Evan’s apparent poor choice of words is hardly justifiable, his underlying intent might not be. Given that Snapchat’s engagement majorly happens with iOS users and it only has 4 Mn users in India out of its 158 Mn estimated active user base, he might not be off base when one thinks of the offending statement in terms of business economics.

Take the case of Facebook, which has close to 166 Mn users in India, which also happens to be its second-largest market outside the US. However, even with the 43% jump in its India revenues to INR 177 Cr last year, the social network earned INR 16 per user, as compared to INR610 it earns per user in the US.

This gap in revenue earned points to the huge growth potential in India, given the rapid expansion of mobile data usage in the country. However, it also points to the disparity of monetising from two vastly different geographies – mature and emerging. As mature economies reach critical mass, it is emerging economies such as India with its growing digital population that will further fuel revenue numbers for Facebook, LinkedIn, Twitter. While, for the moment, India might not fit Snapchat’s primary advertising and revenue market, when it does, Evan’s undiplomatic remarks would be water under the bridge for the IPO’d unicorn.