Snapdeal Goofs Up Yet Again, Delivers Stone Instead Of Samsung Galaxy Grand Max

Snapdeal Goofs Up Yet Again, Delivers Stone Instead Of Samsung Galaxy Grand Max

Snapdeal has done it again! The online shopping site has yet again repeated its art of messing up with orders, this time the ecommerce firm has once again delivered a stone instead of the ordered package.

Nithin Augustine, a Bangalore based Business Relation Executive Head, had placed an order on 11th April and made the payment through online payment mode. The package taped with ‘Snapdeal’ finally arrived to him on 13th April around 5 pm. Little did he know, as he opened his box, unfortunately he found a piece of stone instead of his Samsung Galaxy Grand Max. On seeing the stone, he immediately contacted Snapdeal’s Customer Care to file a complaint. 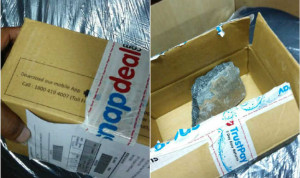 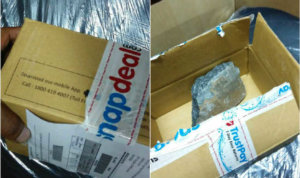 The customer support at Snapdeal convinced Augustine that he will receive a call from an executive who will look into the matter within 30 minutes. However, after waiting for the given time period, he neither received any call nor any acknowledgement mail. The dejected-cum-furious customer called up the customer care centre again and blasted them this time. ”I do not need your products anymore and my refund should be made immediately,” recalled Augustine. The money was refunded into his account within two hours.

This not the first time Snapdeal has done something like this, last year, New Delhi-based Gautam Sachdeva got a delivery of a second hand version of LG G2 smartphone instead of a new phone (obviously). The company had even delivered a soap bar and a scrubber instead of Samsung Galaxy Core 2 Duos smartphone! But it didn’t end there, Snapdeal then delivered a pieces of wood to a Pune based customer who ordered for two Apple iPhone 4S. Another incident was when Mumbai based customer Nitin Chhabria ordered and had already paid for a 13-inch Apple Macbook but when he got the package, it was in small size to which Snapdeal explained that, at the shipment center, mistakenly shipment packets were switched.

Meanwhile, another ecommerce player Flipkart could turn itself into a legal wrangle after delivering a fake JBL wireless speaker to customer named Jay Samal, who is planning to lodge an FIR against the Bengaluru-based company for the hassle.

After refunding the money, Flipkart described the event as ‘rare’ and ‘isolated.’ Samal, an advertisement industry executive, wants to prevent this mistake from happening again as he said “The matter is not just about getting the money refunded. Selling fake products is a serious crime. Not just me, many others are also going through the same hassle by buying these fake products,” to prevent this, “I’m planning to file an FIR and the matter should be decided in the courts.”

This is not something new from our amazing ecommerce firms, despite of spending huge in providing effecient delivery services to the customers, goof ups like these makes customers little confused on whether to shop online or not and thus doubts often leads to fall in trust for online shopping. Incidences like these brings into spotlight the ignorance of the ecommerce platform who in order to cater to growing demand are spreading their vendor base.