The rise and rise of ecommerce has brought about a paradigm shift in the way people shop. Mall hopping-led retail therapy has given way to showrooming and webrooming. Showrooming is when shoppers check out the items in offline stores but ultimately buy them online.

Webrooming, au contraire, is when the shopper researches the item online but ultimately buys it from an offline store. The consumer electronics market, especially the mobile phone market, has been massively impacted by the ecommerce wave; leaving offline stores gasping for breath. There is a war brewing between the etailers and offline stores – the mobile price war.

PriceBaba, a mobile phone research platform, did some research to understand whether consumers preferred to buy their phones online or at a brick and mortar store. It compared the online and offline prices for the top 150 phones sold on its platform. Here are its findings: 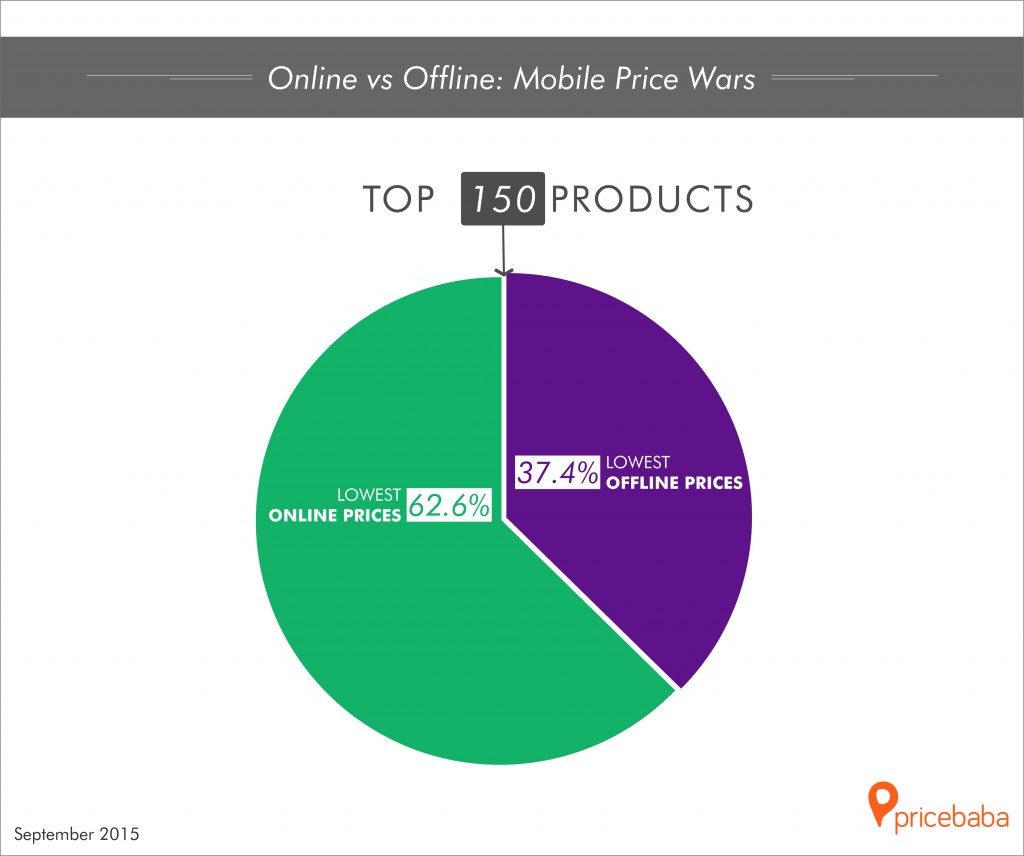 2. Out of the 94 products which were sold online, it considered the lowest prices for each of the phones and found that 51 products were cheapest on Snapdeal, followed by Flipkart with 23 products and ultimately Amazon, with just 20 products. So, according to PriceBaba, Snapdeal is the cheapest online store for mobile phones. 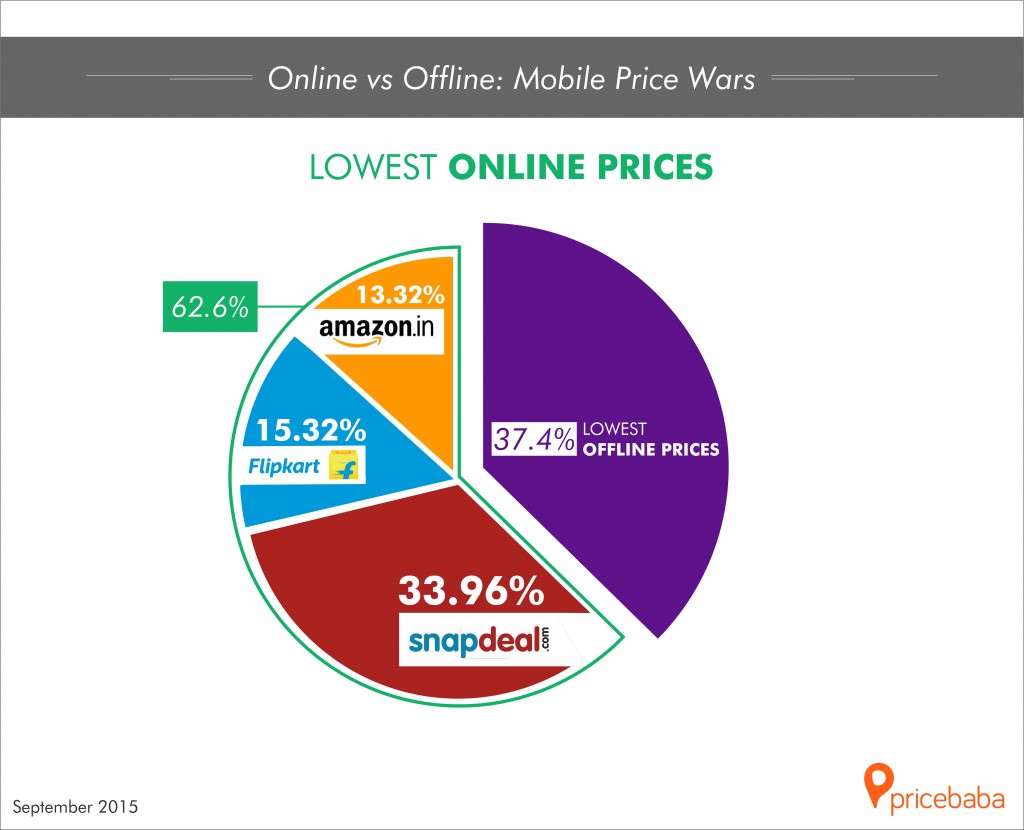 3. Out of the 56 products which were sold offline, it considered the lowest local price for each of the phones from the respective city. It found out that 25 products were cheapest in Mumbai, followed by Bangalore, with 19 products and finally Delhi, with just 12 products. This tells us that buying phones from offline stores in Delhi can prove to be an expensive affair. 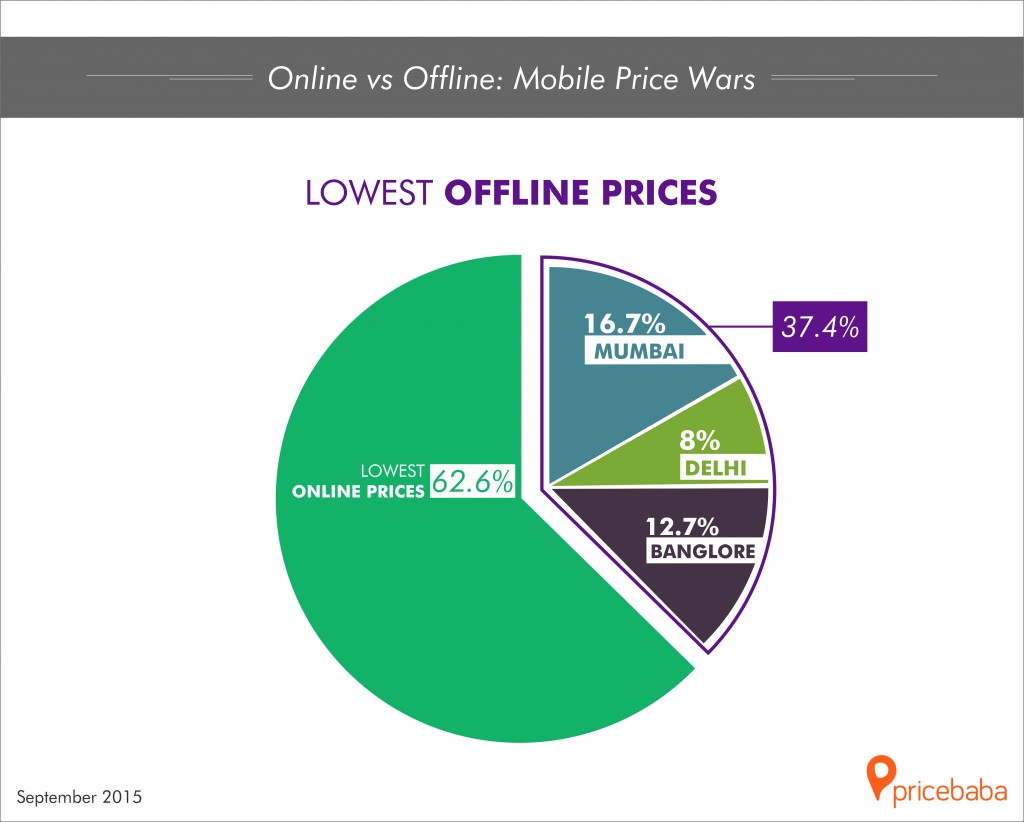 4. It also found out that products which were available online were cheaper by INR 1148, on an average, than their offline prices.

5. Among the top 150 phones which were analysed, Samsung, Sony and Lava had more number of products which were cheaper offline.

6. Other brands like Apple and Micromax had a majority of their phones selling cheaper online.

Currently, the scales are tipped toward etailers and they seem to be reaping the benefits. It would be interesting to see if they would be able to sustain this demand. However, It’s not all gloom and doom for the offline stores. The retailers seem to be fighting back and are optimistic about the future. The rise of webrooming has also given them hope. They should target consumers who don’t like to wait for days to get their phones delivered. With Diwali round the corner, and the war rages on, let’s wait and watch what new tactical weapons will the offline stores unleash to bring down their nemesis.