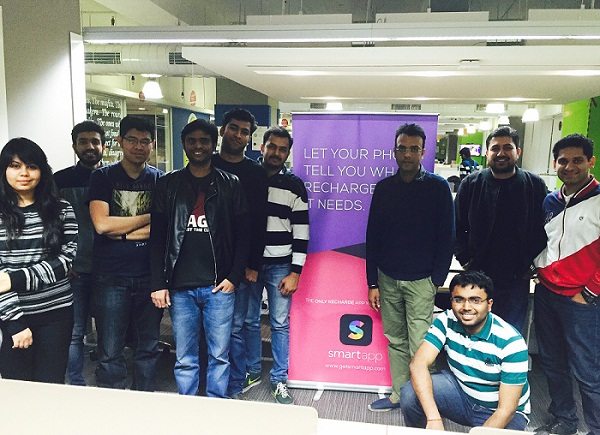 Today, we carry our world in a single device – the smartphone. But with ever-changing data and mobile plans, choosing the best plan for our smartphone becomes a predicament. This becomes a greater problem for prepaid mobile users, who comprise a whopping 95% of the mobile users. They recharge their mobiles twice or thrice a month, doing the math in their mind or simply following leads from others, not realising that one plan which works for the other might not work for them. The irony of all this is that the very data to make our lives simpler in terms of mobile spends, sits in our smartphones-but how do we leverage it?

Built on a data driven approach, Smartapp aims to enable users to save money on regular mobile recharges and bill payments, and optimise their cellular requirements by suggesting the best combo plan for an individual as compared to regular recharges. Adds Deepak, “Our smartphones have all the data  inside them to make our lives simpler and optimise usage. But we depend on alerts by phone companies that our data has run out or we have only this much talk time left. Smartapp wants to give the control back to the users so that they can use it better, without worrying about overshooting limits or constant recharges.”

Based out of Delhi, the 18-member team of Smartapp took four and a half months to develop the algorithm for the app, which finally went live in November 2015.

When the user opens the app for the first time, it asks for the user’s mobile number. Post that, the entire decision making is done by the app and it is pretty self-explanatory. The user can view a detailed usage analysis done by the app by collecting data from the user’s smartphone. The user’s data remains anonymous and is only sent back to the user. The app studies the patterns of a customer’s smartphone data usage and suggests a comprehensive plan that effectively utilises the features of the phone and reduces the bill value.

Users can keep a track of their usage like data, calls, messaging, and can get their recharges done in a single go, with the multi charge feature. “By following the app’s recommendations, users can save money on recharges/bill payments to the tune of 12%”, says Deepak.

Smartapp’s biggest target segment is the prepaid mobile plan users between 18-24 years. These users are price sensitive when it comes to spends on mobile and as per Deepak, the app is designed to help these users the most. According to him, the postpaid segment is roughly 5% of the mobile market and hence the focus on the predominant prepaid segment. Nevertheless, the app will also be available for post-paid mobile users of Airtel and Vodafone in about four weeks. Abbot admits that unlike prepaid users, post-paid users have a fixed monthly cycle, hence the utility of the app for them is lesser.

Smartapp took four and a half months to develop and went live in November 2015. In the first 49 days itself, the app claims to have recorded 200,000 installs; that has now surged to 4,50,000. It is now looking to cross 1 Mn downloads by April. Meanwhile, the recommendation engine of the app has created over 4 lac combinations for its users, based on the data entered by them. On a daily basis, it is receiving 2,000 orders a day from users who are picking up its recommendations. Currently, out of the 4,50,000 downloads, almost 270,000 users now regularly subscribe to Smartapp’s recommended plans. The app monetises through a commission cut on the recharges that go through it. However Deepak adds that this won’t be the primary model of monetisation. The startup is looking at multiple revenue streams including Freemium App offerings (iOS & Android), DMP, and commerce.

The startup has raised an undisclosed amount of seed funding from Times Internet, which is the sole investor in it. As per Abbot, the startup is well funded, for the next 6 months, to work on developing an iOS app as well as improving the algorithm.

The Other Smart Warriors

With rampant smartphone penetration in the country and the number of smartphone users being expected to cross 500 Mn in the next few months, it is hardly a surprise that optimisation of smartphone usage has attracted the attention of a few startups. One such startup is Bangalore-based Mubble, that helps users track their telecom spending as well as mobile data usage, using an in-built self-learning analytics tool. Mubble has raised an undisclosed amount in Series A round of funding from Accel Partners and has also been funded by Infosys co-founder Nandan Nilekani. Then there are others, such as Billbachao and Talkmore, which give recommendations to users for the best tariff plans suiting their requirements. However, Deepak claims that the other apps do not provide a plan that is as comprehensive as that that of Smartapp. It also scores over them in terms of its strong algorithm.

Adds Deepak, “We have spent four months building the algorithm which automatically optimizes  itself on a daily basis. So our algorithm is improving every day and this is what will differentiate us from our competitors.” In the future, the app will also look into solving more problems for people who run out of 3G data, thus helping them optimize 3G usage. Also on the cards, is an iOS app which would be positioned as a global product.

By providing a comprehensive recharge plan, it simplifies the decision making process for the user –that is its biggest advantage. However, it faces stiff competition from other apps providing the same service and it is not yet clear which one of them would be a market leader in their category, till certain differentiating factors clearly give one of them an edge over the others. In this regard, Smartapp’s self-optimizing algorithm and its upcoming iOS app might further its usage and adoption. Additionally, how much faster it is able to zero in on an efficient monetization model is also something which will work towards steering it ahead of the competition.