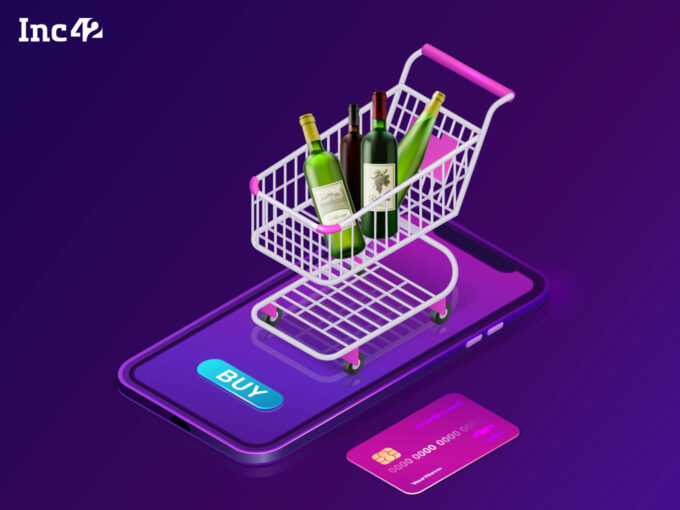 Working from home and can’t even grab drinks after work. That’s the reality for most Indians in the lockdown. While online searches for home-made alcohol have gone up, people are not able to find a substantial solution to get this essential ‘non-essential’.

In some instances, the search for alcohol has even landed people in trouble. For instance, many people from Kolkata and other cities have been scammed in the name of online alcohol delivery. A report in The Hindu shows a nexus of criminals looking to defraud people by promising quick delivery of their favourite booze.

So naturally, it raises the question of whether government policy which discourages home delivery of liquor needs to change. For example, if mobile apps or other online platforms had been allowed to operate, some of these frauds could have been prevented.

Recently, an industry body, the Confederation of Indian Alcoholic Beverage Companies (CIABC), also reached out to the government with a similar opinion. Speaking to Inc42, CIABC director-general Vinod Giri said that it has also written letters to various state governments seeking permission for app-based or online delivery of liquor and alcohol.

According to Giri, most state governments will see revenue benefits from alcohol deliveries, while also enforcing social distancing. Indeed, liquor excise duty is a huge part of state government revenues and allowing this right now would be the best opportunity to test and regulate the sector. For instance, the Tamil Nadu government had collected INR 32KCr as taxes from liquor taxes in the financial year 2019. 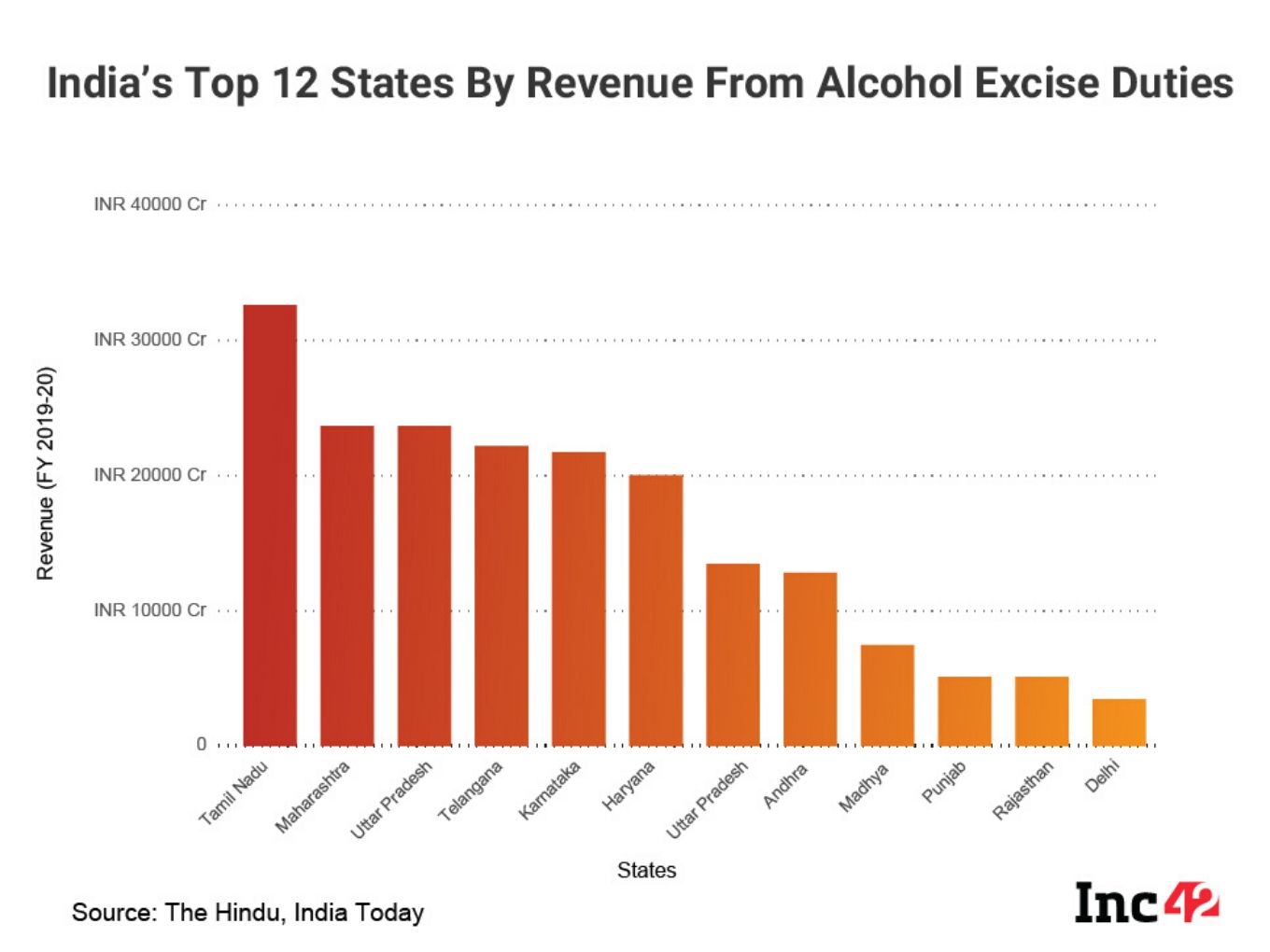 Giri said that hyperlocal delivery startups like Zomato or Swiggy can easily facilitate the delivery in many places but there are certain challenges which they need to first sort out before handing over liquor bottles at doorsteps.

In India, there are at least three challenges which need to be overcome before alcohol delivery can become commonplace. Giri said that first and foremost are the regulatory hurdles.

What complicates matters is that state governments come up with their annual excise policy every year. While no state has explicitly allowed nor banned home delivery of alcohol, the catch is that even if something is not mentioned in the policy, it does not mean the state would allow it.

This clearly means that unless the government brings more clarity in these rules, home delivery of alcohol is far from a sustainable model. However, even if the government clarifies these rules, the other challenges are illicit sale and age verification for buyers. Startups, with their reliance on technology, are well placed to handle these, thanks to new-age technologies such as blockchain and KYC.

Giri noted that HipBar had already started delivering alcohol in Bengaluru until it ended up in a legal battle with Karnataka’s excise department. The Chennai-based startup, founded in 2015, delivered alcohol within Bengaluru and had received a licence to deliver alcohol in the city from the Karnataka excise department in 2017. But in its order cancelling HipBar’s licence in 2019, the Karnataka High Court had said that the eligibility of age and sound mind to receive and consume liquor is difficult to monitor with the app-based model.

However, HipBar founder Prasanna Natarajan believes that these problems could have been resolved easily. For instance, Aadhaar-based age verification, which is similar to what fintech startups leverage, can be used to check the legality of purchases. Natarajan also noted that the delivery person can also ask for ID proof at the time of delivery, thereby preventing minors from buying booze.

Undeterred Natarajan and HipBar continue their battle with the excise department. “We already have permissions for digital payments from the Reserve Bank of India (RBI) and for food delivery from the Food Safety and Standards Authority of India (FSSAI). The only thing now we need to check is whether we need a separate license from excise departments or not,” he added.

Is Alcohol An Essential Commodity?

Many do question whether alcohol can be considered essential, but doctors agree that it can be in some cases.

Even though it has been promoted as a social crutch or a way to unwind and relax, according to Dr Rahul Bagle, consultant psychiatrist at Columbia Asia Hospital in Pune, alcohol has a direct depressant effect on the central nervous system.

Those who consume alcohol on a regular basis and in high quantities will undergo sleep disturbance and hand tremors as withdrawal sets in. In severe cases, abruptly stopping consumption can cause confusion and emotional disruption known as delirium, according to Bagle. “Delirium is a life-threatening emergency,” he noted.

Considering the health factors, the Kerala and Punjab government had included liquor in the category of essentials in the initial days of the lockdown. Both these governments worked out on rules to ensure that social distancing is maintained while people buy liquor from shops. While this helped the government earn some excise revenue, many believe that it’s high time online delivery platforms are allowed to deliver alcohol and help protect state and business revenue. Given the reliance on online grocery shopping, this solution is said to be the easiest to implement.

An App For Alcohol: Will It Ever Become Reality?

While India is currently looking at this option, many countries have already started delivering liquor via online platforms. For instance, a Boston-based startup Drizly is delivering alcohol in the US and Canada. It delivers the alcohol in the same way as people get the delivery of essentials in India via Dunzo. Similarly Mybooze and Zoom Delivery are meeting the demand for liquor in many European nations.

As of now, state governments are looking to resume alcohol sales, before taking any decision on the future of alcohol home delivery via apps. For instance, the UP government had already passed a notification allowing the manufacturing of alcohol in the state after April 20. However, UP said that it is now only manufacturing alcohol for sanitisers only. Other states are also thinking of similar options to refill the tax reserves.

However, many believe that people will not feel comfortable going to a liquor store as a psychological side-effect of the coronavirus outbreak. Also, according to Dr Shanu Srivastava, the senior psychologist at Indian Spinal Injuries Centre, the lockdown will also help many people in quitting alcohol.

Giri believes that this is where hyperlocal delivery startups can play a crucial role to help the governments earn excise revenue and keep alcohol retailers in business too. In his letter, he also advised that each state government can even make its own alcohol delivery app in a marketplace model or by aggregating local inventory, but that would require extensive technology deployment.

For now, the safest opinion for states to protect their revenue is to allow private sector players to operate and bring their technology into play, that has already benefited the hyperlocal and ecommerce sectors.