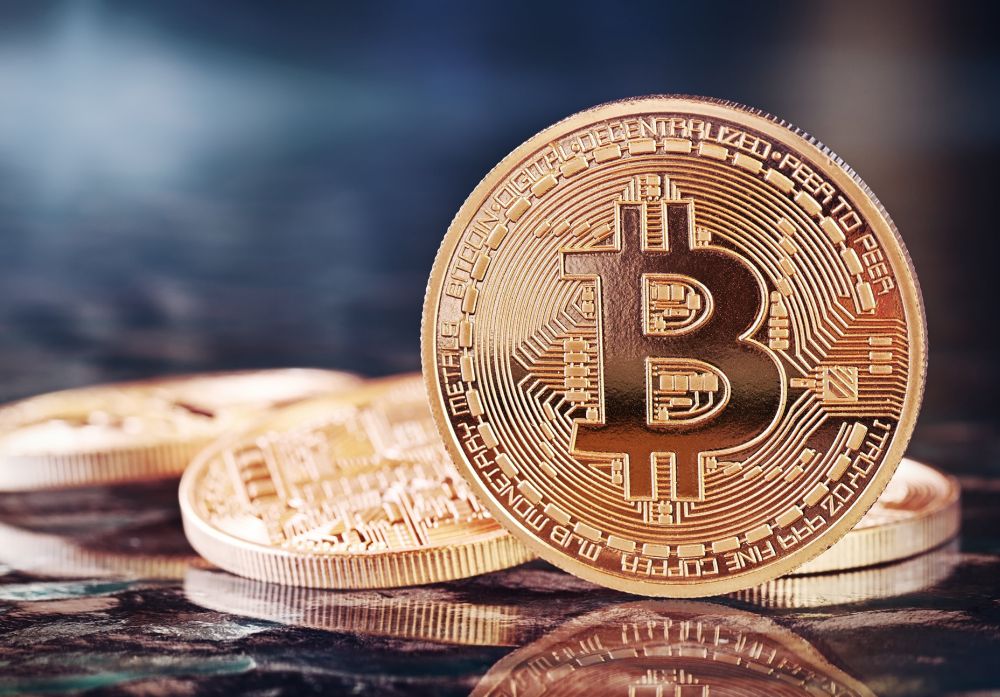 The Securities and Exchange Commission (SEC) has taken the first step to control startups that have raised money by selling their own virtual currencies through Initial Coin Offerings (ICOs). In a recent statement, the SEC stated that at least some virtual currencies being sold to investors should be categorised as securities. This implies that certain ICOs would now need to follow federal securities laws.

The report came in after the SEC concluded an internal investigation on the Decentralized Autonomous Organization (DAO). A project that raised nearly $150 Mn in 2016 before succumbing to hackers who siphoned more than $50 Mn of digital money.

The Enforcement Division of the SEC had launched an enquiry into whether The DAO and associated entities and individuals violated federal securities laws with unregistered offers and sales of DAO Tokens in exchange for “Ether,” a virtual currency.

In its report, the SEC noted that the DAO has been described as a “crowdfunding contract.” But it would not have met the requirements of the Regulation Crowdfunding exemption because, among other things, it was not a broker-dealer or a funding portal registered with the SEC and the Financial Industry Regulatory Authority.

However, the regulator added that they would not bring charges against the organisation’s creators. But it issued an investigative report cautioning market participants. It mentioned that offers and sales of digital assets by “virtual” organisations are subject to the requirements of the federal securities laws. 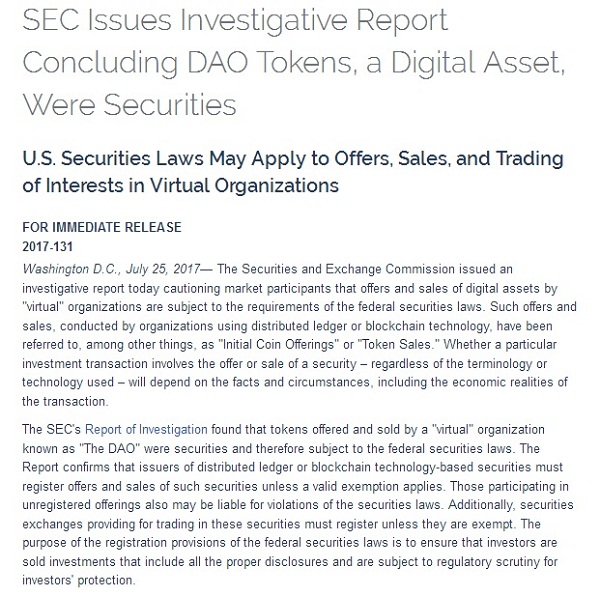 It further added, “Issuers of distributed ledger or Blockchain technology-based securities must register offers and sales of such securities unless a valid exemption applies. Those participating in unregistered offerings also may be liable for violations of the securities laws. Additionally, securities exchanges providing for trading in these securities must register unless they are exempt. The purpose of the registration provisions of the federal securities laws is to ensure that investors are sold investments that include all the proper disclosures and are subject to regulatory scrutiny for investors’ protection.”

Stephanie Avakian, Co-Director of the SEC’s Enforcement Division stated, “The innovative technology behind these virtual transactions does not exempt securities offerings and trading platforms from the regulatory framework designed to protect investors and the integrity of the markets.”

Since the beginning of this year, startups and entrepreneurs have raised more than $1 Bn by selling custom-made virtual currencies to investors in Initial Coin Offerings (ICOs). But, most companies selling virtual currencies in recent months have not made much effort to comply with securities laws. Among other things, these laws require companies to disclose information about their operations before collecting money from American investors.

Of course, somewhere the party had to stop. Yesterday’s decision is one which hints that the SEC was likely to scrutinise both past and future coin offerings. Although the SEC has left open the possibility of some coins to be devised such that they are not defined as securities, depending on the “economic realities of the transaction.”

Initial coin offerings could avoid being categorised as security offerings if they do not promise any returns to investors and do not represent any sort of ownership in the company that creates the coin, among other attributes. The most likely exemption to the SEC rule refers to tokens that would have utility for a specific project. Many tech companies that pursue ICOs say their tokens are just “utility tokens,” which are necessary to activate their products or accelerate their development.

The SEC ruling also raises questions about digital currency exchanges that facilitate trading after an ICO. Because crypto-exchanges may be required to register with the SEC if they trade tokens considered securities and are based in the United States or have US customers.

The SEC’s Office of Investor Education and Advocacy also issued an investor bulletin educating investors about ICOs. The federal securities laws provide disclosure requirements and other important protections of which investors should be aware. In addition, the bulletin reminds investors of red flags of investment fraud and new technologies may be used to perpetrate investment schemes that may not comply with the federal securities laws.

As some ICOs have been criticised for failing to disclose information about underlying businesses and the way tokens are distributed, the bulletin makes investors aware of potential risks of participating in ICOs. 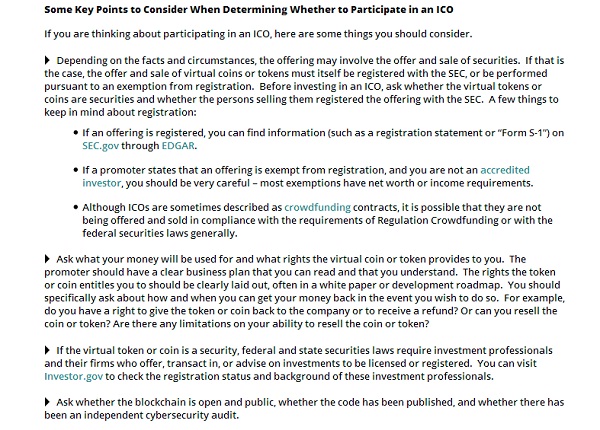 While the SEC’s decision may dampen the spirits of investors and startups planning to offer initial coin offerings, yet according to ICO tracker tokendata.io, 20 new ICOs were announced since the SEC’s decision, with more than 120 scheduled to launch this year. Rahul Sood, whose Seattle-based eSports betting site Unikrn, backed by Mark Cuban, the billionaire Dallas Mavericks owner, is going for an ICO in UnikoinGold, a cryptocurrency based on Ethereum believes the SEC response to certain ICOs was expected by many of  them in the space.

Speaking to Inc42, he said, “The DAO was set up like a security from the start. Anytime you promise things like voting rights, equity, profit sharing you should expect to be regulated like a security. All of the big legal firms in the space including Cooley, Debevoise & Plimpton, and Perkins Coey have written on the subject.  What’s important to note is, if the ICO doesn’t pass the Howey test then it is a security. People need to be super careful when they participate in ICOs, do your research.”

He also added that Unikrn has been operational for nearly three years. Its token, the Unikoin, is not a security, it will never be a security. “It is a token of value that’s used to purchase services on our platform.  People who purchase UnikoinGold are not purchasing equity in Unikrn. They are purchasing a token that is used on our platform for various esports applications,” he explained.

In India meanwhile, the government is still mulling over legalising Bitcoin cryptocurrency in India. The Inter-Disciplinary Committee’s report is expected to be announced by the end of July, after which the Securities and Exchange Board of India (SEBI) may be asked to step in to regulate transactions.

Sandeep Goenka, co-founder and COO of Indian Bitcoin startup Zebpay welcomed the move by the SEC and stated, “ Like with any new technology, regulation always has a tough role to balance user protection and not stifle innovation. We look forward to working with the SEBI and Indian regulators to spread awareness of ICOs and user protection.”

Meanwhile, Bill Shihara, CEO of US-based cryptoexchange Bittrex, stated that he sees no need to register his exchange with the SEC because it does not plan to trade securities on its platform, only utility tokens. However, given that fact that SEC will now strictly start looking into Initial Coin Offerings in the coming days, the enthusiasm and frenzy around Bitcoins and cryptocurrencies might cool off a bit.