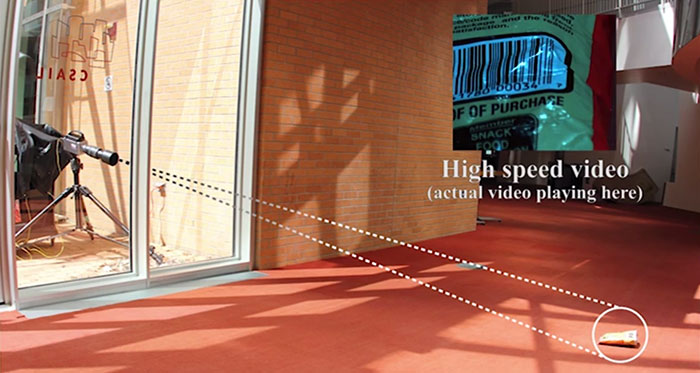 Remember those scenes from a James Bond flick or that sci-fi television show where forensics can reconstruct sounds from a crime scene just using a CCTV footage? Well that’s now possible!

That bag of potato chips can tell what you’re saying. A group of MIT researchers figuring out a way to make that bag of chips tell them everything that you said.

By pointing a video camera at the bag while the audio is playing or someone is speaking, researchers can detect tiny vibrations in it that are caused by the sound. On replaying that recording, they can read those very vibrations and translate them back into the original sound, music or speech.

“THIS IS TOTALLY OUT OF SOME HOLLYWOOD THRILLER.”

While a bag of chips is just one of the examples where this method can work, the researchers have found success with it elsewhere, including when watching plant leaves and the surface of a glass of water. While the vibrations that the camera is picking up aren’t observable to the human eye, seemingly anything observable to a camera can work here. For the most part the researchers used a high-speed camera to pick up the vibrations, even using it to detect them on a potato chip bag filmed 15-feet away and through a pane of soundproof glass. Even without a high-speed camera though, researchers were able to use a common digital camera to pick up basic audio information.

“We’re scientists, and sometimes we watch these movies, like James Bond, and we think, ‘This is Hollywood theatrics. It’s not possible to do that. This is ridiculous.’ And suddenly, there you have it,” says Alexei Efros, a University of California at Berkeley researcher. “This is totally out of some Hollywood thriller. You know that the killer has admitted his guilt because there’s surveillance footage of his potato chip bag vibrating.” The research is being described in a paper that will be published at the computer graphics conference Siggraph.

Want to get the geeky details, read the full report on MIT News.