Walmart-owned digital payment app PhonePe has said that the Supreme Court (SC) has rejected the Special Leave Petition (SPL) filed by Resilient Innovations (BharatPe) that questioned the judgment of the Bombay High Court.

In October 2021, PhonePe approached the Bombay High Court claiming that Resilient Innovations (BharatPe), through its buy now pay later platform PostPe, was engaged in an identical field of digital payment services to customers. The plea considered Resilient’s PostPe as an infringement and passing off of PhonePe’s trademark.

In the court hearing, the Bombay High Court asked PhonePe to file a fresh suit as there was no registration of the word mark ‘Pe’ per se in PhonePe’s favour and that it had a label or device mark with the word ‘Pe’ in the Devanagri script.

Resilient Innovation questioned this decision of the Bombay High Court stating that PhonePe could not be permitted to cure a ‘defect of substance’ or to overcome the possibility of failure to prove the case pleaded originally.

On March 11, 2022, a bench of justices SJ Kathawalla and Milind Jadhav rejected Resilient Innovation’s plea considering it against legal provisions.

The Battle Over ‘Pe’

The ‘Pe’ saga dates back to 2018 when PhonePe sent a legal notice to BharatPe for using the suffix ‘Pe’. Following this, BharatPe changed the logo and color scheme but even then, PhonePe dragged BharatPe to Delhi High Court claiming trademark over ‘Pe’. 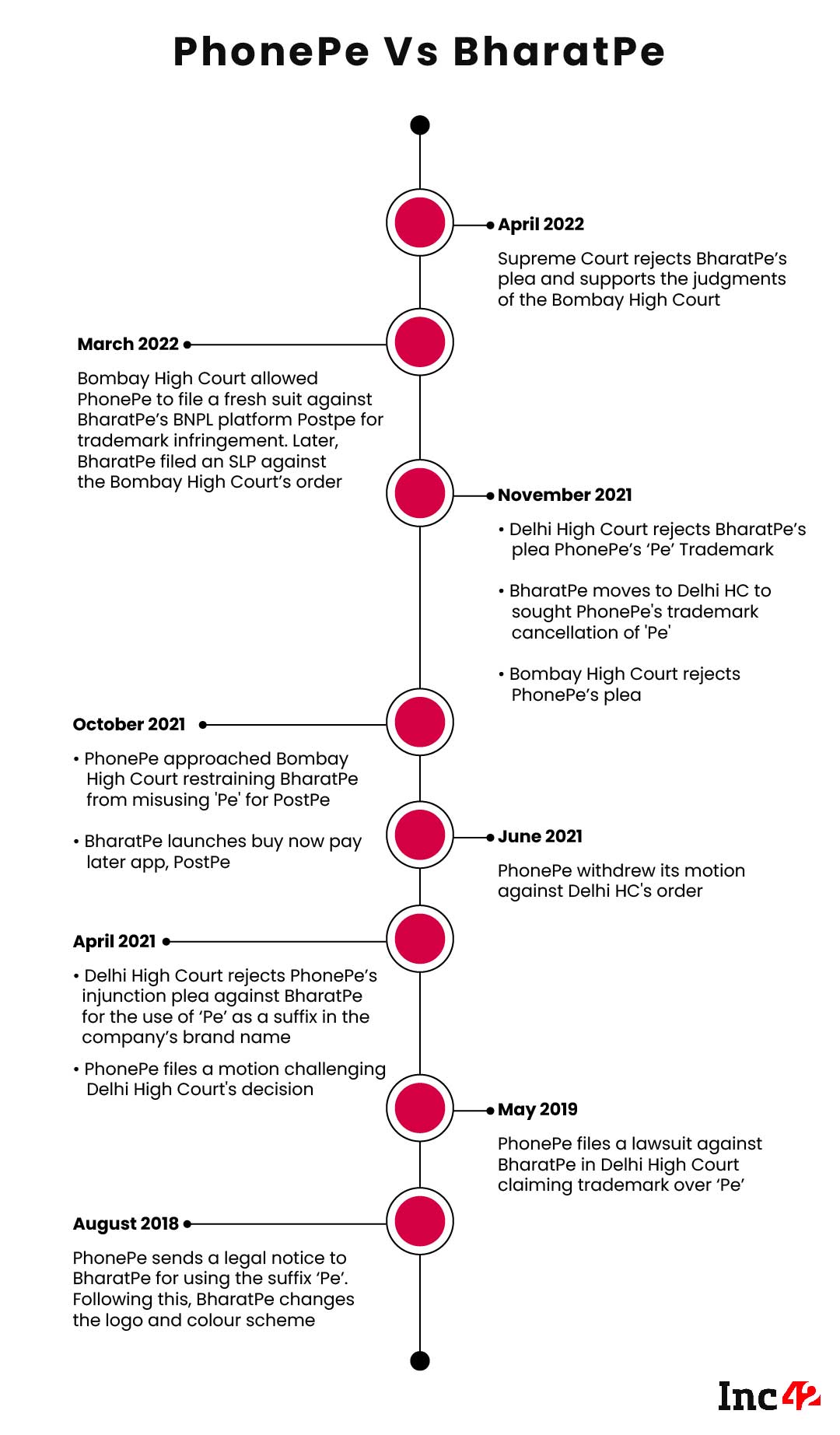 In April 2021, the Delhi High Court  rejected the injunction plea of PhonePe against fintech startup BharatPe for the use of ‘Pe’ as a suffix in the company’s brand name. The court held that PhonePe’s claim that the suffix ‘Pe’ gives the company distinctiveness to the extent that consumers would invariably associate ‘Pe’ with the company is a matter of trial. The case was heard by a single bench of Justice C Hari Shankar.

The matter was settled for a few months but with the launch of BharatPe’s BNPL platform PostPe, the fire was rekindled and PhonePe again filed a lawsuit at Bombay High Court against BharatPe’s usage of ‘Pe’ in October 2021. The Bombay High Court rejected the PhonePe’s plea.

Following this, BharatPe moved to Delhi HC to seek PhonePe’s trademark cancellation of ‘Pe’ but in November 2021, the Delhi High Court rejected BharatPe’s petition to cancel multiple registrations of Flipkart-owned PhonePe for the ‘Pe’ suffix.

The High Court noted that the petitioner Resilient Innovations (BharatPe) in its petition stated that it “reserved its right to file rectification petitions” against all PhonePe registered marks, including, those which have been dishonestly and fraudulently registered.