In one of the most sensational developments for the cryptocurrency and the allied blockchain ecosystem, the Supreme Court (SC) has overturned the Reserve Bank of India (RBI) decision of banning crypto asset trading, which has been imposed since April 2018.

The SC on Wednesday (March 4) said the ban would be lifted. Excited crypto and blockchain experts told Inc42 that the decision will herald a new future for cryptocurrency trading in India and make way to more startups and investors.

Crypto exchange WazirX founder Nischal Shetty told Inc42 that this is a historic day. Now, anyone who wants to start a cryptocurrency startup — exchange, smart contracts — can do it easily. Shetty expects the crypto market to have over 100 startups along with VC investments, better jobs and a real contribution to the economy.

The move to legalise cryptocurrency trading is also expected to boost the adoption of blockchain applications and platforms. Since blockchain forms the backbone for most of the cryptocurrencies in the world, India could soon have a clutch of new blockchain operations to back the crypto wave.

Similarly, Aman Sanduja, cofounder of Zubi Infotech, told Inc42 that the reversal of the ban will also open up investment opportunities. Sanduja said that exchanges would see new incoming liquidity in the coming weeks. He also said that KYC would still remain an import factor for exchanges to onboard an authentic users, which is where blockchain could play a role.

The below-shown graph about the global blockchain distributed ledger market depicts the change in the industry from 2014 and projected till 2023, where the usage of blockchain technology has been witnessed across sectors. Apart from sectors like BFSI, governance and retail and ecommerce, blockchain in media and communication seem to be the next big thing, followed by usage of this technology in the automotive industry. 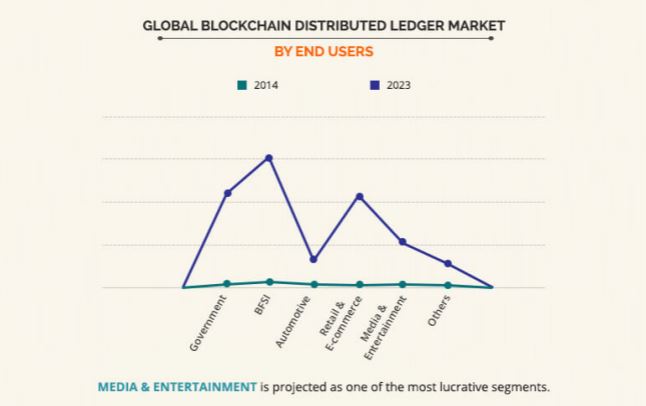 Canadian-based Uranium One, one of the world’s largest uranium producers, has partnered with a New York-based blockchain startup Insolar to explore blockchain’s capabilities in uranium and energy trading.

The companies are working towards developing a platform that could monitor the uranium supply chain and logistics more transparently and in a paperless manner. More than anything, Uranium One believes that leveraging blockchain technology will further enhance security, compliance and reliability in the space.

London Is The Hub For Blockchain Startups

According to a report by Outlier Ventures, a private equity firm from London, the UK is the preferred hub for blockchain-related ventures in the global market. The regulatory environment in Britain and easy corporate registration, as well as proximity to Europe, are some of the factors, the report highlighted.

Moreover, with a combined $503 Mn invested in London-based blockchain firms since 2013, and one in three blockchain companies were also able to raise funding. The report also emphasises on the recent funding rounds led by the London Stock Exchange Group, where it has invested $20 Mn in a blockchain startup called Nivaura, a digital investment banking platform for banks.

Interestingly, the report also stated that almost 60% of the blockchain investments in the city were in Series A and B funding, indicating that the startups were in the growth phase. As far as the conversion rate from seed stage to Series A goes, it stood at 13% and only a mere 3% for Series B.

Mexico-based fantasy sports platform Contxto has partnered with Argentine blockchain startup TradeStars to jointly build a platform that matches with changing regulatory landscape of sports betting. The platform will be using Ethereum blockchain so that the users can trade using digital assets.

Similar to a stock exchange platform, where the prices increase or decrease based on market demand and news, the player’s digital value will also change based on their performance as well as overall demand within the platform.

The Argentina government, which was using a blockchain-based system for registering companies, has suspended the tool for a period of 180 days. According to statements, the decision comes from the General Inspectorate of Justice (IGJ) which wants to be part of the entire process of registration.

Nearly 20K companies were incorporated in the county under the blockchain-based system since its implementation in 2017. Further, the process took 24 hours, compared to the 55 days in the traditional process.