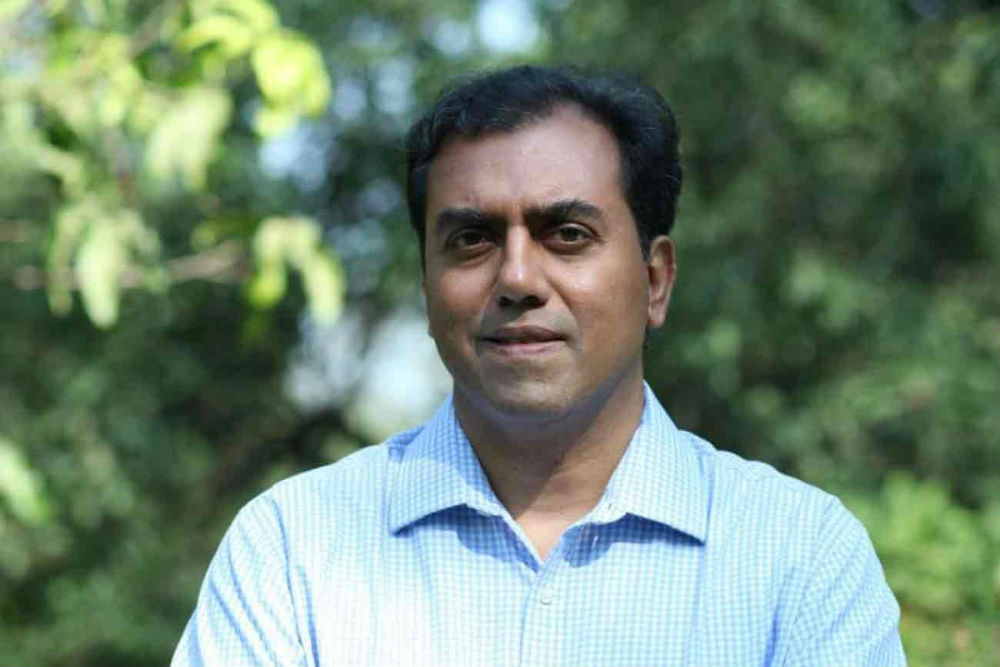 One of India’s most active VC firms for the year 2017, Seed stage and early-stage startups investor Blume Ventures is going to raise its third and largest fund worth $80-100 Mn next year. The fundraise is expected to kickstart early 2018 and will be raised by mid-2019. With a ticket size of $500K-$1 Mn, the fund will be used to invest in some 35-45 startups with subsequent follow-ons, as shared by Sanjay Nath, Cofounder, and Managing Partner while speaking to Inc42. 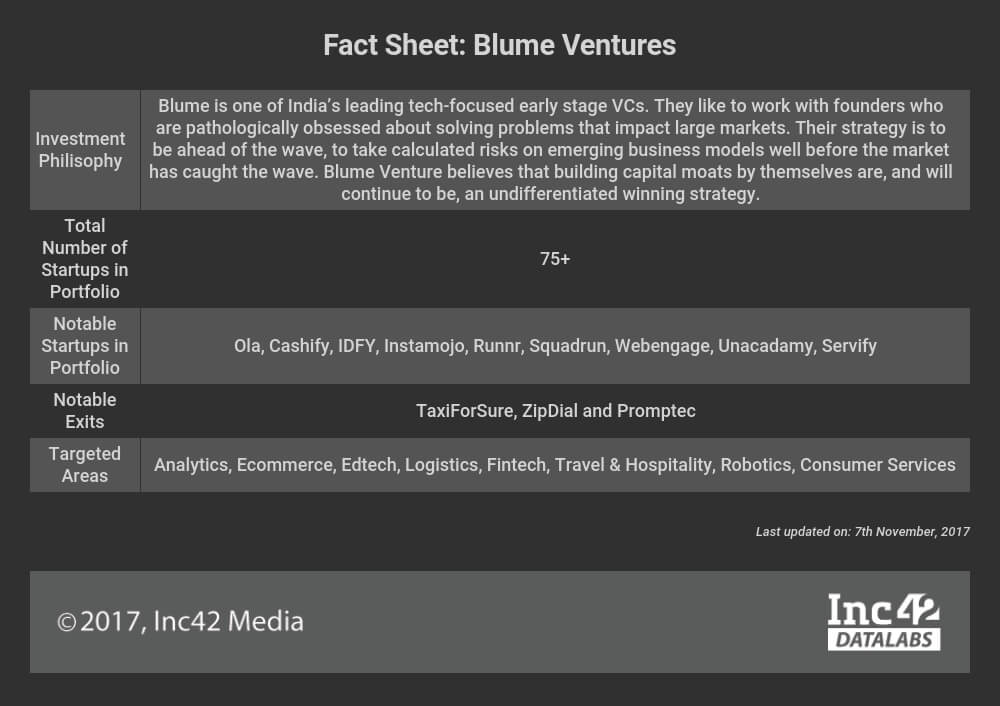 As claimed by Nath, Mumbai-based Blume Ventures currently has 75 active startups in its portfolio. The VC firm is now also looking to launch an incubation programme by next year to increase its engagement with B2B startups.

A Look At Blume Ventures’ Fund I and Fund II Investments

As per the H1 2017 tech startup funding report by Inc42 DataLabs, Blume Ventures was cited as the most active VC fund along with Accel Partners.

Although focussed primarily on tech startups, Blume Ventures’ portfolio is quite diverse and agnostic. The VC has invested in edtech, Robotics, Healthcare, IoT, Big data and analytics, ecommerce, fintech, and logistics among others. Some of its notable investments include Unacademy, GreyOrange Robotics, Tricog, and Zipdial, all of which have impacted the space in their respective market segments.

GreyOrange Robotics has now become an MNC that designs, manufactures and deploys advanced robotics systems for automation at warehouses, distribution and fulfilment centres. “GreyOrange Robotics is one of those startups whose idea excited us, the most. Both Karthik (Cofounder, Blume Ventures) and I were involved, since day one. The company is one of the foremost robotics companies in India. Now, they have become a leader in their space,” added Sanjay.

Tricog is another startup that uses technology to help patients gain access to quick and accurate diagnosis. The startup has come up with affordable ECG devices that can be strategically located at local clinics to help doctors detect patients heart-related issues within minutes. This can be instrumental in a country like India where millions suffer from the heart attack every year. Sanjay Nath says, “This is like a virtual cardiologist. What makes it unique and effective is its algorithm.”

With the third fund, the VC firm is further looking to enrich and diversify its portfolio.

On Anti-Portfolio and Exits

With an aim to support more and more early stage startups, Sanjay, along with Karthik Reddy founded Blume Ventures in 2011. The VC firm has invested in 75+ startups since 2011 and has made almost 10 exits.

Some of its exits include TaxiForSure to Ola, Zipdial to Twitter, Promptec to Havells.

When asked if Blume maintains an anti-portfolio list, Sanjay Nath said, “In the anti-portfolio, I would name Oyo, Swiggy, and Fab Hotels.”

While speaking of exit policy, Sanjay Nath mentioned, “We like to continue the startups’ growth journey along with the founders. We would like to stay in and support our portfolio as long as we can. We do further extend our support via follow up rounds. Via Draper Venture Network and other aspects of our ecosystem, Blume Ventures has widened its network to help founders add global customers and users, and ultimately, exits.”

After Ecommerce, What Next?

So far, ecommerce has ruled and dictated the Indian startup space. Recently, there has been a noticeable growth in deeptech, fintech, healthcare, IoT, AI, and agritech. Sanjay believes that in India, it is more about the localisation of technology and innovations that could solve problems unique to ‘Bharat’. Technologies that could fulfil desi needs.

“For instance, right now, I am in Delhi; and look at the pollution here. It’s worst in the world. So, I would like to see technology and innovations on air-filtration and purification, batteries, and clean energy. We may see more startups solving local transportation issues based on Ofo model, recycling etc.”

He further added that the application of technology will be extremely important to solve India-specific problems. “For instance, Robotic applications, AI, IoT, VR and AR applications in healthcare. We have got a billion consumers, and hence expect to see more lending platforms, deeptech for global enterprises, Logistics, SaaS. We will see a good mix of traditional and cutting-edge technologies,” adds Sanjay Nath.

So, now that the fund size has been increased, will Blume Ventures look beyond just Seed/early stage?

To this, Sanjay said, “Seed stage /early stage funding is part of Blume Ventures’ DNA, and we will stick with it. The company will keep investing in tech startups and we are looking forward to a) continuing “enabler” ideas (e.g. edtech, fintech, healthcare) around India’s massive B2C opportunity of a billion users, and b) on the B2B side, pursuing deep-tech innovations around robotics, logistics, IoT, AI/ML, biotech/life sciences/clean tech, etc.”

On a concluding note, Sanjay said that merely an idea is not enough. Its potential and social relevance are equally important. “Entrepreneurs must stick to the fundamentals. The passion should be about solving the issues of society at large. Focus on users, funds will follow.”

While expecting more startups to fulfil Delhi’s ever-increasing pollution issues, Sanjay Nath is extremely enthusiastic about the ongoing deeptech innovations in India and sees a ‘global appeal’ here. VC firm Blume Ventures’ upcoming incubation programme will largely focus on deeptech and robotics related areas. However, there are dots that are yet be fulfilled. “In Silicon Valley, we have corporates that start working with startups right from the beginning. In India, with Mahindra, Unilever having recently joined the startup bandwagon, things are improving. The Indian ecosystem has a long way to go. Also, the government must provide some instant grants to startups coming up with cutting-edge technologies. Something that Singapore government does.”