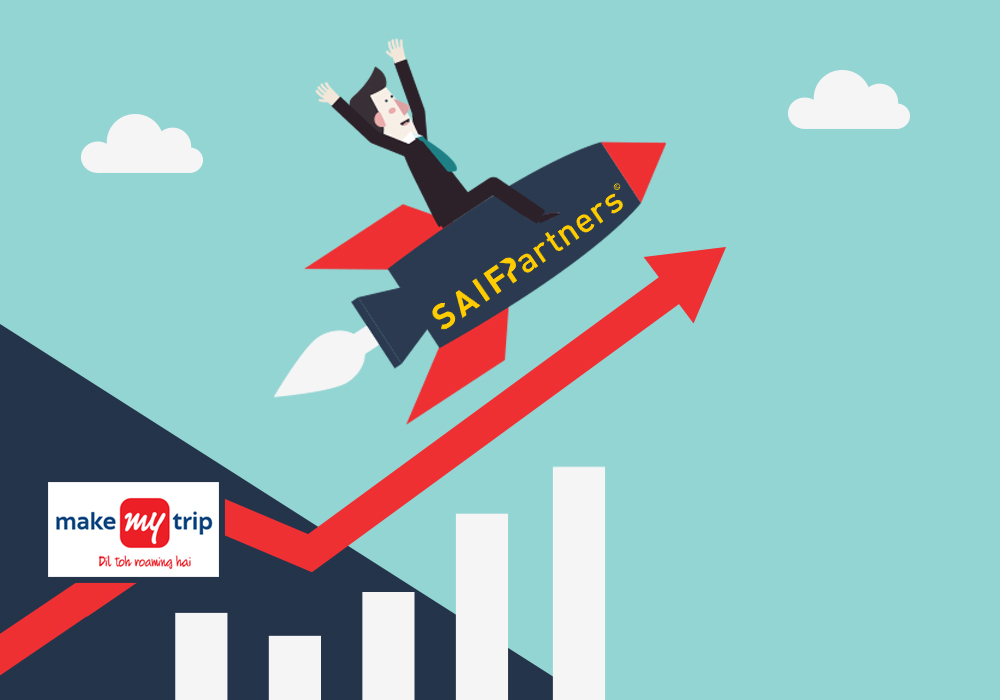 Every VC firm in the world longs to make a profit from the investments it makes in companies – the faith that it places in unknown ventures. The best possible scenario for VC investors is when the company it has backed debuts an IPO or, makes enough money that the investor can make an exit.

Such is the case with venture capital and private equity firm SAIF partners. It has exited from its investment in travel portal MakeMyTrip (MMT), as per the recent SEC filings of the Gurugram-based company.

As per an ET report, SAIF Partners had invested about $25 Mn in MakeMyTrip between 2005 and 2008 and owned about 41% stake in the company, when it debuted on Nasdaq in 2010. The VC firm was left with about 11.8% holding in MakeMyTrip in October 2016 and has reportedly clocked about 16 times return on its investment in MMYT.

This deal is being touted as the largest cash exit from a venture in India. Currently, MakeMyTrip has a share value of $33.95 per share. SAIF is estimated to have reaped in about $400 Mn overall, on its bet on MakeMyTrip.

In October 2016, MakeMyTrip announced that it will acquire Ibibo Group. In the announcement conference call, MMYT’s founder Deep Kalra stated, “With this transaction, our focus going forward is to continue accelerating the pace of travel bookings growth from off to online, since online travel penetration remains fairly low at around 15% for the accommodations industry and 18% for the organised bus industry in India.”

The Ibibo group, which is owned by Naspers (91% stake) and Tencent (9% stake), was sold in full, in consideration of issuance of new shares by MakeMyTrip. As per the terms of the deal, Naspers and Tencent remain the largest shareholders in the resulting company with a combined stake of about 40%.

The merger turned the MMYT-Ibibo group into a mega entity that aims to control a fifth of the lucrative airline booking market and also have significant shares in the bus and hotel bookings, and ride-sharing spaces – signifying consolidation in the online traveltech space.

The merger has also made the competition tougher for rivals Cleartrip.com, Yatra, Booking.com, Expedia, and hotel aggregators such as Softbank-backed OYO.

A Light In Times Of Devaluation

Indian startup poster-child Flipkart is also facing repeated beatings in its valuation. In January 2017, Fidelity managed mutual fund again slashed its valuation by 36.1%. The company is now currently valued at $5.56 Bn. In November 2016, mutual fund Valic also marked down the valuation of Flipkart shares from $108.04 (May end quarter) to $95.84 (August end quarter), a decrease of 11.3%.