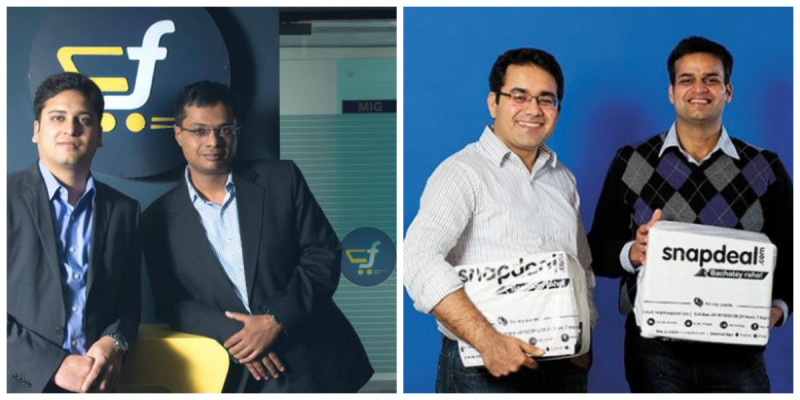 It was time when the Indian ecommerce biggies of the country, i.e. Flipkart and Snapdeal were chasing each other in terms of funding. Now, it seems acquiring startups is something next they are competing for. Just last week when Flipkart acquired AdIquity, rumors of Snapdeal acquiring another startup in a similar domain i.e. Komli Media sufficed in media; now, once again both the players are rocking the media, as Flipkart is looking to acquire mobile marketing startup DSYN Technologies Pvt. Ltd and Snapdeal is in talks for acquiring online recharge platform Freecharge.

According to a ET report, Snapdeal is in advanced talks for acquiring FreeCharge for over $450 Mn.”The two companies have signed off on the deal,” said one person privy to developments. “It will be a combination of about 40% cash and the (balance) in stock.”

Just last month, Freecharge had raised $80 Mn in a new round of funding led by groups of investors including, San Francisco-based Valiant Capital Management and Hong Kong-based hedge fund Tybourne Capital Management. Previously, it had raised INR 200 Cr. in Series B round of funding and in 2012, Sequoia had invested about INR 20 Cr in FreeCharge and prior to that, it also led seed round into it.

FreeCharge was founded in 2010 by Kunal Shah and Sandeep Tandon, head of technology conglomerate Tandon Group. In 2013, Alok Goel joined in the team as Chief Executive Officer after moving out of redBus.

We have reached out Kunal shah, however his reply is awaited.

According to a Mint report, mobile app marketing startup DSYN Technologies Pvt. Ltd, this move comes in due to the shift in customers’ shopping preference toward mobiles.

Currently, Flipkart’s 70% of the total traffic comes through mobile, whereas, 65% of all orders received by Snapdeal originate on mobile phones.

SAIF Partners and former Facebook Inc. executive Prashant Malik are investors in DSYN, which has created the product Appiterate that helps to increase downloads of their mobile apps and drive higher spending on apps by targeting users more efficiently. Tanuj Mendiratta, along with Anuj Bhargava, Mayank Kumar and Varun Sharma, started Appiterate in January, 2013.

Appiterate will help Flipkart do more targeted marketing on its app—that’s the main reason they’re buying it,” said one of the people close to the matter.

Flipkart had hired Nishant Verman from venture capital firm Canaan Partners to head its M&A team last year and since then, it had already acquired 3 startups. In total, Flipkart has acquired 6 startups i.e. WeRead, Mime360, Chakpak.com, LetsBuy, Myntra and AdIquity.