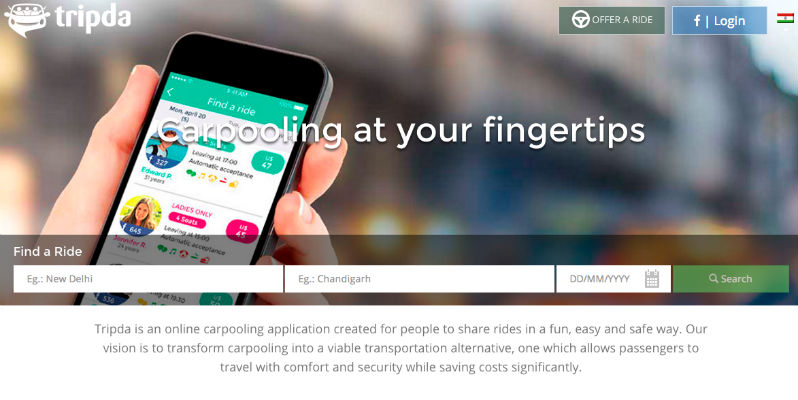 Within months of launching in India Tripda has realized potential Indian Market holds, following which it raised $11Mn in Series A funding from an undisclosed New York Venture firm and its largest investor Rocket Internet  to fuel its expansion in India.

The company said that the funds will be used for expansion across 13 countries which was confirmed by Pedro Meduna, co-founder and CEO of Tripda as he said, “A lot of this capital will be invested in India to get closer to our user base. We will also use funds to improve our product and consider expanding to other markets.”

On this development Nitish Bhushan, Tripda India Country Manager said that the funding places a marker in the ground for Tripda and they will continue to invest and strive to become the premier carpooling platform in India. After autos, cabs became common because of their easy to avail services but they can cost a pretty hefty amount and in a market like India car-pooling seems to be the next best alternative. This is evident as another carpooling service BlaBla Car was launched in India this month.

Statistics reveal that Indian taxi market is estimated to be worth about $9 Bn (INR 54,000 Cr.), of which only 4-6% is organised. There are around 2.3 Mn taxis registered in India with homegrown players like Meru, OlaCabs, TaxiForSure. The entry of Uber has further intensified the competition among these. These players have also been lured growing use of carpooling.

Meduna said the he welcomes competition in the industry and added that “Our biggest barrier is to get the concept of carpooling across to customers. We are long term players and welcome competition.”

Indian Government has promoted carpooling as it a green alternative but this was never organized, with entries of carpooling services more and more customer can be acclimated to this service and saving commuting costs at the same time. All these factors make this an attractive business for transport companies.

Tripda is run by a global team of employees and connects people who need rides with people who have empty car seats, fills the important long-distance travel market as an alternative to buses, trains and short flights.