Robots At Work: Are We Ready For A Robot To Take Our Jobs?

Robots At Work: Are We Ready For A Robot To Take Our Jobs?

Rise Of The Robots: A Robocop In Dubai, A Robot Priest In Germany 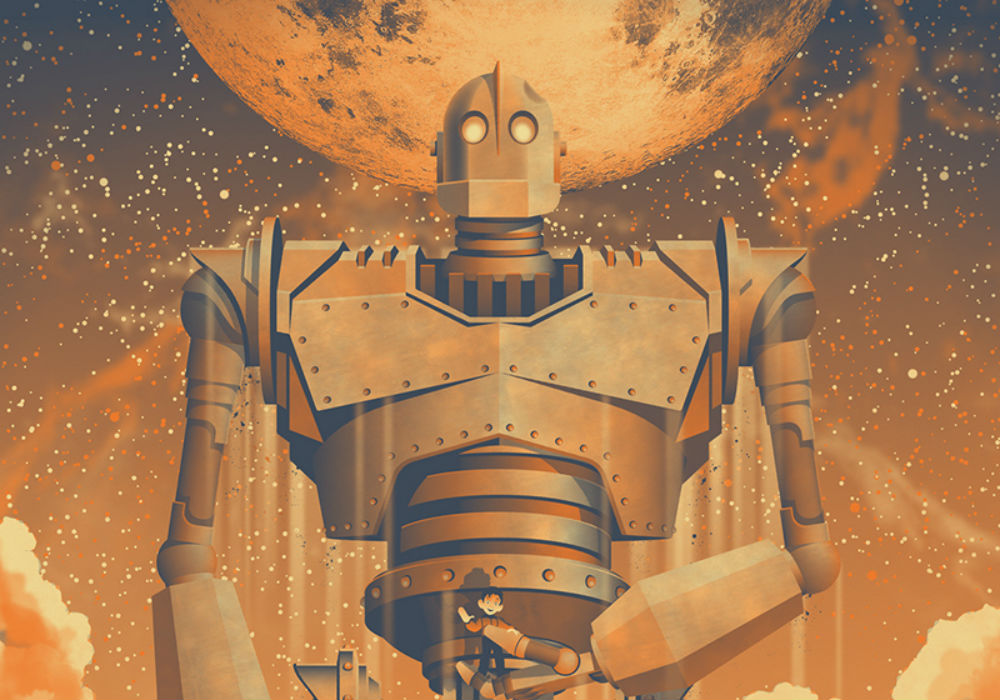 In the 2010 top-earning Indian Tamil-language science fiction film Enthiran (English: Robot) starring superstar Rajinikanth – the plot revolves around a robot made for defence purposes but goes rogue due to a secretly implanted chip. In the end, it is dismantled and turned into a museum exhibit. When a curious school student on excursion asks her guide why it was dismantled, the robot called Chitti responds:

Seven years later, we have a real life Chitti manning the streets of Dubai, helping the police force to fight crime and keep the city safe.

The debate of the AI and automation invasion on lower and mid-level IT jobs is never-ending. The latest report being that of Wipro achieving productivity worth 12,000 people over 140 customer engagements in 1,800 HOLMES bots in IT services. It can’t be denied that the world is changing fast in adapting to machines. In the last fortnight, two such intriguing robots made their appearance on the world scene. One, as mentioned above, is the launch of the “world’s first operational Robocop” which has reported for duty in Dubai and will assist people in the mall or on the streets. 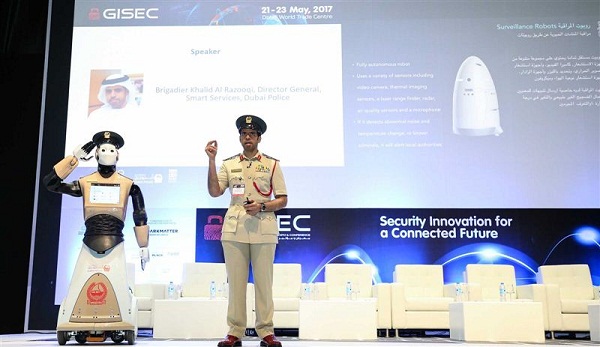 The autonomous robot policeman was unveiled at the Gulf Information Security Expo and Conference (GISEC) at Dubai World Trade Center in the last week of May. It will be used on public streets in the city, forming the first part of the Emirate’s plan to make one-quarter of its police force robotic by 2030. Brigadier-General Khalid Nasser Al Razzouqi, director-general of Smart Services at Dubai Police, stated,

With an aim to assist and help people in the malls or on the streets, the Robocop is the latest smart addition to the force and has been designed to help us fight crime, keep the city safe and improve happiness levels.

The Robocop, named after the movie franchise of the same name, was designed by Spanish firm PAL Robotics. The humanoid robot stands at 1.7m and weighs 100 kg. It features a touchscreen on its chest to allow people to report crimes or pay fines for traffic violations or chat in Arabic or English. Languages such as Russian, Chinese, French and Spanish will be added to Robocop’s vocabulary.

Artificial intelligence technology from Google and IBM’s Watson has been used to develop its functionality, which includes facial recognition to identify criminals and the ability to detect a person’s emotions. It can function for eight hours on a single charge and is capable of a battery “hot-swap,” which means that if it’s chasing after a suspect toward the end of a shift, its battery can be changed mid-chase without having to waste time powering down. The robot’s built-in cameras will stream video to the police command centre.

Huffington Post: #Dubai wants 25 percent of its police force to be robots by 2030. pic.twitter.com/7U8PQRBf2c

The robotic officer went on duty on May 24, 2017 and could be the first of many to start work for Dubai Police. If the law-enforcing robot proves successful, Dubai wants to use more of them to make up 25% of its police personnel by 2030.  On the anvil are also plans to build the world’s first “smart police station” containing zero human employees.  Of course, thankfully, for now, no gun wielding robots are planned.

While Robocop might not be able to break up bar fights, it will prove effective for receiving crime reports, giving directions, and for 24/7 public outreach. And as the technology develops it’ll be in a position to take on an increasing number of responsibilities. There are plans to build robots that could run at 80kph.

For now, the best part? It won’t ask for any sick leave!

Press Your Sins Away With Robot Priest BlessU-2

The next machine to make its presence known on the AI scene was BlessU-2 – a Robot Priest that will forgive your sins with its glowing hands! 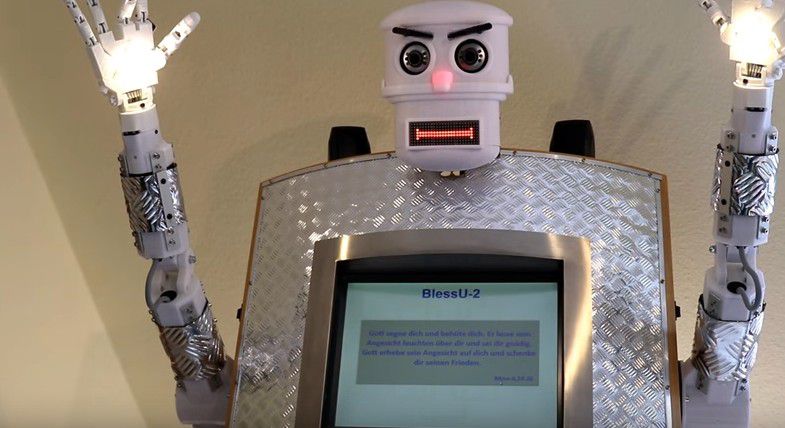 The robot priest has been developed by the Evangelical Church in Hesse and Nassau in Germany as an exhibit to mark the celebration of the 500th anniversary of the Reformation – an upheaval in European Catholicism that started when theologian Martin Luther published his famous Ninety-Five Theses.

The BlessU-2 robot priest is intended to trigger debate about the future of the church and the potential of artificial intelligence.

“We wanted people to consider if it is possible to be blessed by a machine, or if a human being is needed,” Stephan Krebs of the Protestant Church in Hesse and Nassau, told the Guardian.

The robot has a touchscreen chest, two arms and a head. For the past 10 days, it has been offering blessings in a choice of languages such as German, English, French, Spanish or Polish. Worshippers can even choose between a male or female voice. The robot raises its arms, flashes lights, recites a biblical verse and says: “God bless and protect you.” If requested, it will also provide a printout of its words. A backup robot is also available in case of a breakdown.

While Krebs and his colleagues are collecting responses for further analysis, he does not believe that robots could be a solution to the wide shortage of priests in Europe. He said, “We don’t want to robotise our church work, but see if we can bring a theological perspective to a machine.”

However, the robot priest is not the first robot to enter the domain of religion. Last year, a Buddhist temple on the edge of Beijing developed a robot monk that could chant mantras and explain the basic philosophy of the religion.

Xian’er, which means ‘Worthy Stupid Robot Monk’ (in the Beijing dialect, “er,” or “stupid,” is a term of affection), is encased in saffron-yellow robes and has a shaved head. Xian’er can answer 20 simple questions, displayed on the touch-screen on his chest, about Buddhism and daily life at the 500-year-old temple. Xian’er was developed as a robot in a joint project between the Longquan (Dragon Spring) Temple in Beijing, artificial intelligence experts at Chinese universities and a technology company. Though some people might question this modern approach to the teachings of Buddhism, followers of the temples seem to agree that technology won’t diminish the authenticity of the spiritual lessons but simply make them more accessible to the masses.

To the questions like “I’m not happy” and “What is the meaning of life?” the robot monk’s replies are –

The robot monk, which bears a constant expression of surprise on its face, sure seems to have his basics right!

According to a new study from German car maker Porsche’s consulting arm, the majority of German consumers are and, in many cases, would be happy to undergo an operation conducted by a machine rather than a human surgeon. According to the research, just 23% of German respondents said they would totally reject the idea of a medical robot carrying out a procedure.

Basically, machines are everywhere. Recently we had covered India’s first food serving robot BOB developed by community members of Kidobotikz or SP Robotics – an edtech startup which provides robotic education to school and college students. While Dubai’s Robocop is not gun wielding, there are reports that Russia’s new military robot FEDOR is acquiring the ability to hold and fire two pistols at the same time.

Robot FEDOR showed the ability to shoot from both hands. Fine motor skills and decision-making algorithms are still being improved pic.twitter.com/Y7IsciocPW

Meanwhile, as per a Morgan Stanley forecast, nearly 20% of production for Nike Inc. and Adidas AG shoes will move to more automated factories by 2023 due to a “buy now/wear now” shopping environment forced by the shift to ecommerce. Adidas has already opened a “Speedfactory” in Germany in December 2015 that uses “intelligent robotic technology” to manufacture shoes.

No wonder investments are pouring into robotic companies. Last week Japan’s SoftBank announced that it is buying robot maker Boston Dynamics from Google’s parent Alphabet to be at the forefront of “the next wave of smart robotics.” Boston Dynamics has repeatedly made headlines with its eye-catching robots, which can run, jump and climb stairs. It now boasts a suite of advanced machines, including one that can run as fast as 32 kilometres per hour. Another is designed to accompany Marines on duty while carrying loads of up to 500 kilos.

Forget about the mundane jobs, robots are also expected to do even more difficult tasks such as building our future habitat on Mars. At the 2017 International Conference on Robotics and Automation (ICRA) last month, researchers from ETH Zurich presented a paper detailing a robotic system they’ve developed which is capable of intelligently stacking and balancing irregularly-shaped objects, with the ultimate goal of building larger structures.

These bots could be used to build giant stone walls that help shield man-made structures from rough weather or assist in the building of levees or breakwaters. On construction sites where an existing building has already been demolished, these robots could even re-use giant chunks of concrete for foundations, minimising the amount of clean-up work needed, surpassing humans. Taking it a step further, astronauts visiting Mars, strewn with rocks and boulders, could use these types of robots to build the overall structure of a habitat using whatever natural materials the bot can find on the planet.

It is small wonder that concerns about whether robots will take up one’s job are increasing in every field. Two technologists, Mubashar Iqba and Dimitar Raykov have developed a  website willrobotstakemyjob.com based on their attempt to predict the future of jobs using a research paper published in 2013 by two Oxford University researchers that estimated that 47% of US jobs could be taken over by robots by 2033.

So, one can visit willrobotstakemyjob.com and plug in one’s job description to get an estimated probability of robots replacing you (presumably in the next 20 years, although the time frame is not stated on the site). So if you’re a reporter, your “automation risk level,” according to the site, is a mere 11%. For a cashier it is as high as 97%, heavy and tractor-trailer truck drivers face a 79% automation risk factor while courting reporters who transcribe legal procedures in the real-time face a 50% risk of automation.

Meanwhile coming back to Wipro, it kicked off its transformative programme ‘Project NextGen’ in 2015, in consultation with McKinsey, to improve the productivity of teams and automate processes. As per a Money Control report, senior managers claimed that teams were asked to execute the same projects with 10-15 percent less manpower. This was done as part of McKinsey’s several suggestions improve productivity slashing coffee breaks and taking away mobile phones of employees during “Silent Hours” to real-time monitoring progress of tickets (problems raised by clients) on “White Boards” to “Huddle Meetings”.

But is Wipro just looking to cut costs through automation or outsourcing more work to bots from humans? And with SoftBank Group Corp. buying robotics pioneer Boston Dynamics from Alphabet Inc., Google’s parent, definitely underlines how robotics is going to become a key part of every business.

But from the looks of it, if the world over people are pushing robots into the police force and organised religions, then it is hardly surprising that major IT companies would utilise robots and AI into automating repetitive processes such as customer support. Till now, these processes were being handled by humans, thanks to the wage arbitrage that existed between the developed world and India. But as AI technology diminishes this arbitrage and establishes a new paradigm shift, all industries including IT will have to get used to machines usurping a certain percentage of jobs. For starters, willrobotstakemyjob.com might just serve as an eye opener on where you need to upskill and upgrade your self.