The Rise Of New Age Media: Blurring The Lines Between Content And Journalism

The Rise Of New Age Media: Blurring The Lines Between Content And Journalism 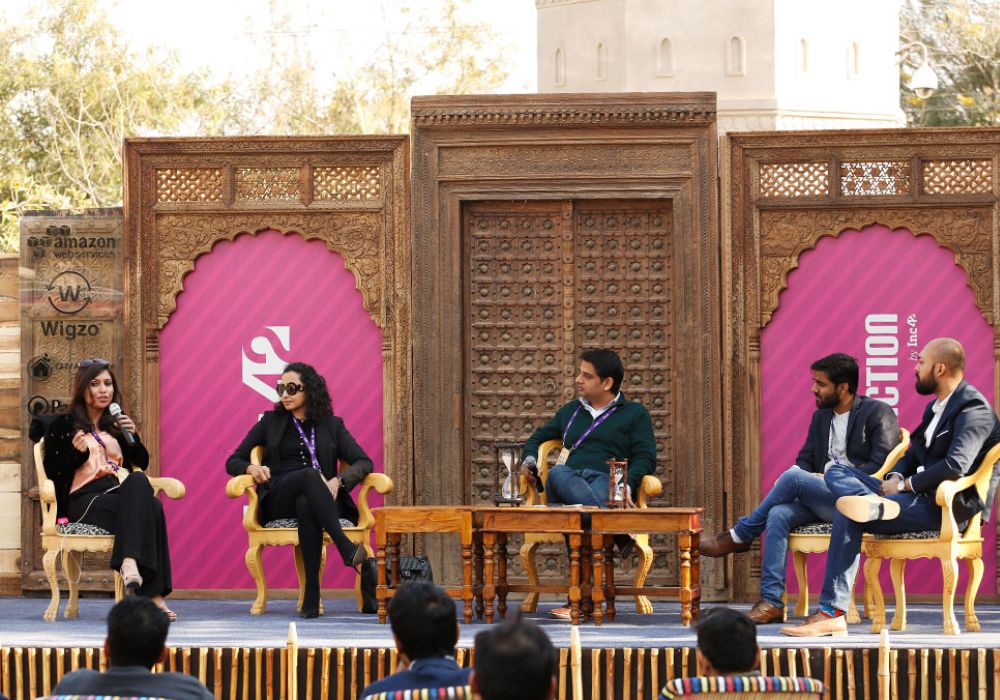 A blogger-turned-social media influencer. An adman-turned-startup founder. A college graduate who runs a content company valued at $30 Mn. And an angel investor whose startup is anchored in three cosmopolitan cities.

These individuals were the panellists on Day 2 of The Junction 2017 – an invite-only conference for 300 of the top tier entrepreneurs, founders, investors and who’s who of the global startup ecosystem held from January 12-14, 2017 in Jaipur. The panel that they were part of was titled The Rise Of New Age Media Companies, ably moderated by Principal and Founding Member at Lightbox Ventures, Nitin Sharma.

taking the lion’s share of the audience by giving them content they will relate to and, therefore, consume. These local players consist of – among others, media platforms such as ScoopWhoop, WittyFeed, POPxo, and MissMalini – the panellists onstage.

The Business Of Journalism – Blurring The Lines

Traditionally, the world over, media companies have been identified as those which present factual, unbiased reporting to their readers in order to help them make informed political decisions, Nitin pitched the first and foremost question to the four content companies present – “Are you in the business of journalism?”

Rishi from ScoopWhoop took up the baton as he answered,

“When ScoopWhoop started, it was more about creating entertainment-driven content. But, in recent times, with a small group of journalists coming in from legacy publishers such as HT and others, we are to a certain extent.”

He did qualify his statement with, “We are still not in the business of creating news, but we do believe in having an opinion and provide social commentary on issues that we feel are important to the audience.”

For both Priyanka and Malini, they were unequivocal about not being part of ‘journalism.’ Priyanka stated, “We are all about catering to the young Indian women who needs to feel like she is being heard and seen. We create shareable content on different platforms for them – it’s all about entertainment, entertainment.”

Vinay agreed with Malini and Priyanka as he stated that WittyFeed is not about pure news but, “as we grow as a company, you cannot not be part of mainstream media, even if you start off in viral content and entertainment like we did. We believe in producing ‘serious content’ for the interested audience, which can be defined as a new kind of journalism.”

But it was Malini who opined that, “In today’s world, you can’t bucket everyone under journalism or not. The interesting thing about everyone who is on stage here is what we are all doing in terms of creating content – new content for the new millennial, the Gen Z or ‘Gen Me’ who is all about the self, who wants content right now, fast, and relevant only to themselves.”

The New Age Millennial Audience Is Not Loyal: Unanimous Consensus

This answer led straight to Nitin asking the next important question when it comes to new age companies, aka startups – defining their audience and reaching out to them. And, they were all unanimous in their answer – their audience is the new age millennial, between 16-35 years of age with unrivalled spending power as compared to any previous generation, the world over. And therefore, not easy to market to, be it in terms of content and or brands.

Vinay was emphatic about distinguishing WittyFeed as a more global platform, which began in Australia, Europe and has lately entered India and North America. According to Vinay, the content they create is very international with 30% of traffic coming from Europe and, only recently, becoming popular in India with 35% of its traffic originating from here. He also defined language as the second parameter in which to define audience and content, which needs to be personal and relatable in order to be shared. “In fact, the second language we launched in after English was Spanish, third being Hindi,” he added.

Rishi stated that the new age millennial is not really loyal to any particular platform or news agency. He also credited social media with breaking away the traditional form of doing news – the user’s Facebook feed could contain a Game Of Thrones next season trailer, followed by an editorial on Trump’s presidency. “The importance of what is considered ‘news’ is now dedicated by the consumer, instead of the audience. So we have learnt to look at our content the same way too, in order to stay relevant to our users.”

Malini added on to this point by saying,

“You can no longer sit on your island with your content. Social media has changed the dynamic altogether and if you’re not able to reach your audience and go to them, you cannot inspire loyalty and influence – two essential ingredients in order to stay relevant in a time when there are so many choices available on the internet.”

Priyanka further expanded on this point by pointing out the two key factors POPxo is following in order to do so – content being predicated by life stages and being available. “A 22-year-old new bride will want different content on sex, relationships, fashion than a single girl. Our job is to give this content – be it on besties, boyfriends, lifestyle etc. on mobile phones, which is the single device to the gateway into our audience’s world. We have to ensure they tag and click on our content so we become part of their mobile world.”

Malini rounded off the question by mentioning that the media and entertainment ecosystem has not matured in India to an extent that video has taken over digital so it is important to connect traditional mediums such as TV and radio to the millennial by creating content on those platforms.

Native Format Advertising: Monetising Content In The Near Future

When we talk about businesses, whether young or mature, it is but obvious that from catering to a customer the next step would be to build a relevant brand and monetise on the platform/product/service being built by the startup. Nitin’s next topic of discussion dealt with these themes.

“On one hand, when social media allows for personalisation, it also creates a problem of abundance, too much choice. How does brand building and monetisation happen then?” he asked.

Again, all of the panellists agreed that brand-building was an important part of the content game.

“While scale is important when it comes to digital, it is even more important to earn the audience’s respect through credibility, relevance, point of view (conviction) or even sheer entertainment. It’s the most difficult medium to earn that because everything happens in real-time,” said Rishi. According to him, brand-building would eventually happen when one caters to this value add need of the audience over a period of time.

At this point, Nitin jumped back in and asked about the importance of ‘direct contact’ with respect to the number of app downloads and the audience consuming directly on site. To which Rishi replied, “We don’t lose sleep over direct contact. ScoopWhoop creates customisable and monetisable content on different platforms for different platforms for our consumers, which is why brands come to us. And we are able to charge them for it.” He added that the company has deviated from display ads or programmatic advertising for this reason, and is focussing almost entirely on native format advertising. “Brands want native format advertising campaigns to answer – how can we scale on revenue and gain engagement at the same time, such that it will be truly successful and adoption will be faster.”

He cited the example of Flipkart choosing “a spike in the Flipkart Search” section to measure effectiveness of content marketing as a smart way of understanding how native format advertising works.

Vinay’s take was slightly more radical and penetrative. “Content consumption itself has changed,” he said. “It’s about new age media reaching out to the millennial by saying, ‘I have this story that you want to read on my platform.’ And the audience will read it there. Or if it’s not me, it will be ScoopWhoop or PopXo. There’s no such thing as loyalty, so app downloads too don’t matter. Our app downloads amount to about 100K, whereas our FB presence is 1.5 Mn likes and we have 100 Mn unique site visitors. I guess, Facebook is our main platform,” he chuckled.

Vinay also added that due to leveraging social media and Google, almost 100% of WittyFeed’s revenue comes from programmatic advertising. “We operate in the four markets where the PPMs are at least 10x what they are in India, even though effort to be made is the same. Besides, native format advertising is recently catching on in India in a large-scale manner and it is still not trackable or reliable vis-à-vis impact regarding conversions, engagement and on which medium do these two occur. It is not just about views or page clicks. And for solving this, tech is the way forward,” said Vinay.

Brand Building Is Key, Making Money Is For The Future

Priyanka disagreed with Rishi and Vinay and mentioned that:

“Brand is built on a single voice, it is about consistency, point of view and creating content for our audience to the extent that they know what stands for us and what doesn’t.”

She also added that brand-building exercises were important or you’d be vulnerable to the ‘next young thing’ coming up and usurping your space. The other factor Priyanka touched on was ordering and controlling the source of traffic, so it wasn’t entirely dependent on outside sources such as social media or Google.

Malini stated that the blog started off as a personality-led platform but the majority of its interactions happened on social media. “We call it social media, but treat it with robotic perception, forgetting that it is people sitting on the other side. The only way brand-building can be successful is by giving good content, which is honest and true to the audience on a regular basis and which fills a gap that previously did not get filled,” she added.

She also added that in order for the brand to be successful, they have to ‘treat the customer like a human being.’

When it came to monetisation, Priyanka mentioned that native format advertising targeted towards POPxo’s audience was the go-to strategy for the platform when it came to dealing with brands in order to generate revenue. “We have aligned ourselves with 200 bloggers and influencers who conduct our campaigns, do other forms of native advertising and go to campuses and create the right kind of noise for brands to want to engage with us.”

Malini’s take was much simpler – she answered the basic question of ‘why people shop.’ “Our job is basically demystifying fashion for the average Indian millennial consumer. All girls will tell you they have a closet full of makeup they have never touched, because they don’t know how to use them. What we do is to be able to help you use those products, understand them and implement them in your daily usage,” she said.

But it was Malini’s parting take on the very existence of startups that fully captured the essence of the panel discussion.

“Startups are about starting up,” she said. “And they are already asked ‘why aren’t you making money right now?’ But when were startups ever supposed to be about today? Startups are about building the big companies of tomorrow. We are setting the stage for them, at the moment. And considering the global presence of half a billion consumers and with 220 Mn smartphone users in India alone, the potential for advertising is huge. And existing for all of us,” she aptly ended.