In February this year, CEO Balachander Sekhar had said that he was confident that insurance tech startup RenewBuy would turn profitable by 2021

Reacting to the financials, Sekhar said that beyond losses, the company has witnessed a 50% increase in revenue compared to last year 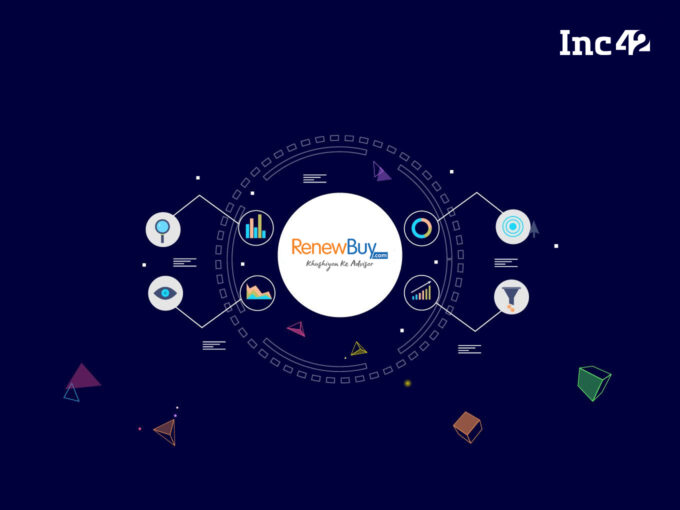 While most sectors of the economy have been reeling, the insurance sector has had somewhat of a sheen in these tough times, due to sections of the populace becoming conscious of their health and financial well-being amid a raging pandemic. Insurance tech startup RenewBuy is confident of riding this wave to attain profitability by March 2021, despite the company’s recently-released financial performance for the fiscal year 2019-20 (FY20) being less than encouraging.

The Gurugram-headquartered startup which helps insurers digitise claims using artificial intelligence (AI) for processes such as data collection and customer servicing, has seen losses grow by 76% in FY20, ending March 31, 2020.

Founder and CEO Balachander Sekhar, however, reiterated his earlier claim of the company becoming profitable by 2021. Speaking to Inc42, Sekhar highlighted that RenewBuy’s differentiated approach will help it become the first among new-age insurance tech players to turn a profit. 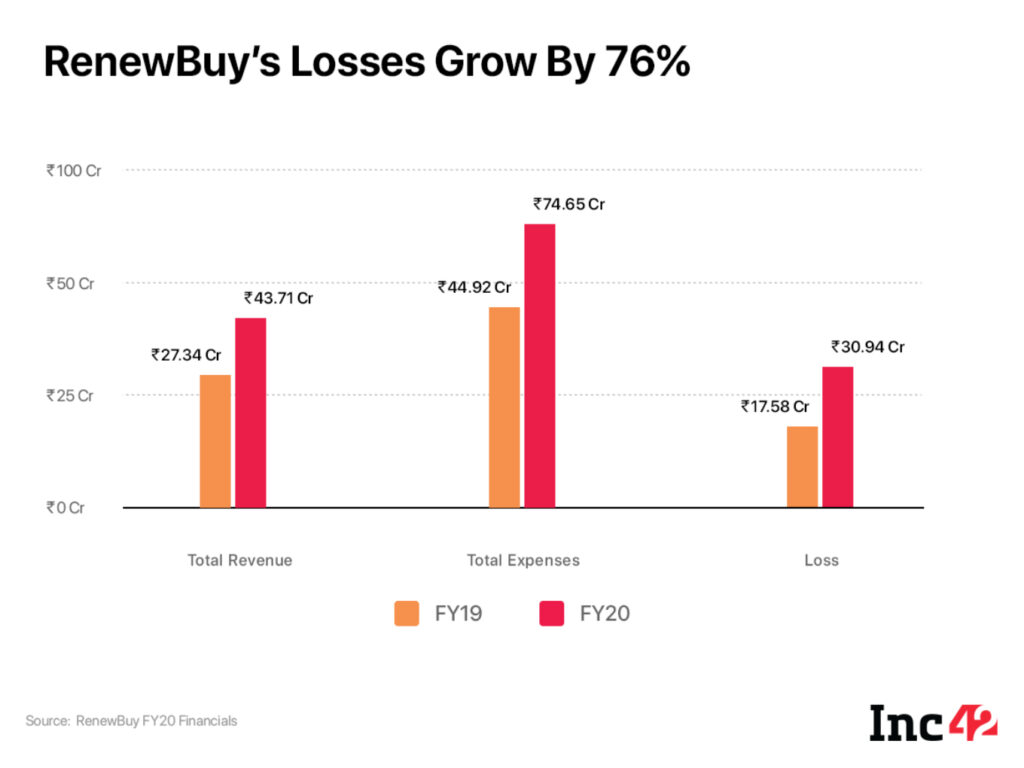 Speaking in February, Sekhar had already stated that the company will see profits next year. And he brushed off any notions of the financial performance for FY20 indicating a change in that target, explaining that the year necessitated increased investments in the company’s manpower. “We knew we had to spend big. Our insurance agents, through a franchise model, have nearly tripled since March last year, from around 12,000 to 35,000 as of now, of which, 10,000 have been on-boarded amid the pandemic,” said Sekhar.

“We are well-funded to make these huge investments. The loss forecasted for FY20 was actually INR 35 Cr but we’ve closed the year at INR 30 Cr, which is a positive sign for us.”

Founded in 2015 by Sekhar, RenewBuy is an app-enabled end-to-end digital insurance platform that provides motor, health and life insurance policies to customers. The company claims to have serviced 2 Mn customers to date. RenewBuy also claims to have secured a branchless presence in more than 600 districts across the country, with more than 35,000 certified point-of-sale (PoS) insurance agent partners.

Here, RenewBuy acts as a registered broker with the Insurance Regulatory Development Authority of India (IRDAI) and receives commission income for policies that it sells from these insurance providers. It spends money to acquire advisors and the balance is the earning.

RenewBuy’s financial filings highlight that in FY20, the company’s expenses shot up across segments. As indicated by the founder, the tripling of the company’s strength of insurance agents is reflected in the 99% increase in employee benefit expenses, from INR 18.12 Cr in FY19 to INR 35.98 Cr in FY20. 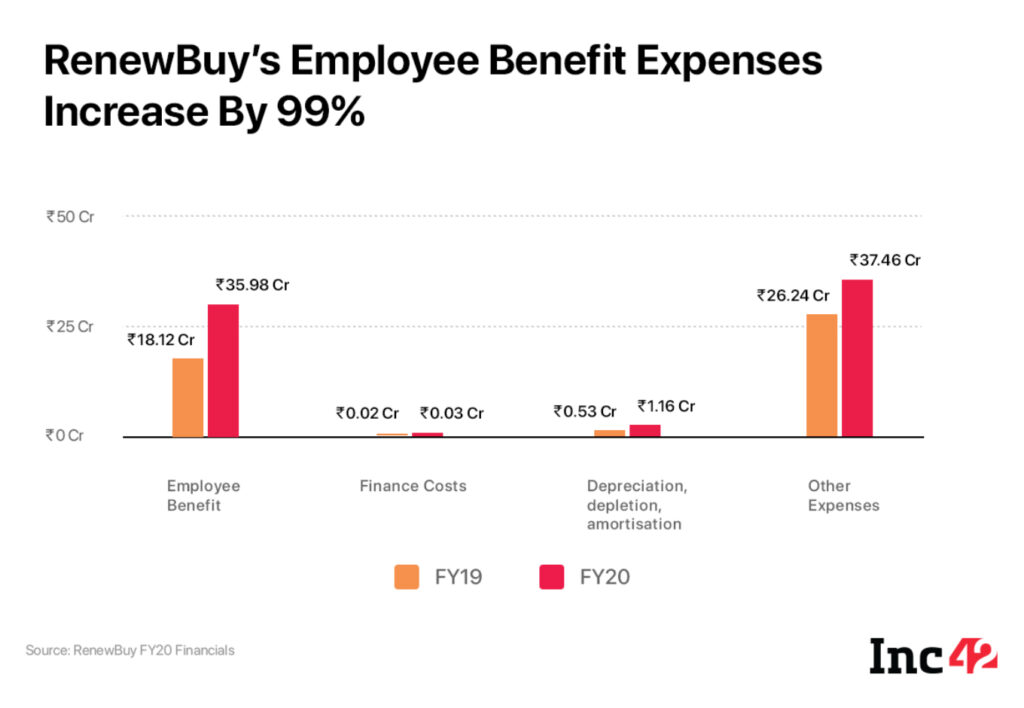 Other expenses, which include the company’s spending on rent, fuel, power, legal fees, training recruitment and advertisements, also increased by 43%, from INR 26.24 Cr in FY19 to INR 37.46 Cr in FY20.

It is worth noting that the filings referred to above are indicative of RenewBuy’s financial performance in the fiscal year ending March 31, 2020. Hence, the numbers don’t reveal the impact of the Covid-19 pandemic on the company.

But CEO Sekhar told Inc42 that while the pandemic has meant that customers have become more conscious about health and wellness and recognise the importance of insurance, physical distancing protocols necessitated due to the threat of Covid-19 have triggered a shift in the approach taken by RenewBuy’s agents and their methods of pitching products to potential customers.

“Besides hiring insurance agents, we have hired a lot of people in the product team, who have given a major fillip to our philosophy of utilising technology for selling insurance products. Our agents are now interacting with customers through a video conferencing feature built into the RenewBuy app,” said Sekhar, claiming that from April to October this year, RenewBuy’s revenue has increased by 50% when compared to the same period last year.

RenewBuy’s pivot to a tech-driven approach for its agents has been facilitated by IRDAI’s digital push, whereby, it has allowed health and general insurers to obtain the consent of prospective policyholders through a duly validated one-time password (OTP), thus dispensing with the practice of getting a wet signature on policy documents. The relaxation will be valid till March 31, 2021.

The recent filings mention that the company expects to diversify its products under the three segments, as well as have more segments contributing to its revenue in the near future.

As for the market outlook for players engaged in the insurance sector in India, the corporate affairs filings note that while the Indian economy and its gross domestic product (GDP) has shown signs of slowing down, contracting by 23.9% in the first quarter of the ongoing fiscal year (FY21), the insurance tech sector is poised for growth.

“Insurance industry and especially the health segment is showing a promising growth prospect due to rising awareness post-Covid-19,” say the filings, but cite data about growth for the insurance segment in FY20 and not the ongoing fiscal year.

In its Union Budget for FY20, the Indian government allowed for 100% FDI (foreign direct investment) for insurance intermediaries such as RenewBuy. This will allow Indian insurance players functioning as intermediaries, considerable room to raise funds from foreign brokerage companies.

To date, RenewBuy has raised $29.6 Mn from four funding rounds, the last of which was a Series B round worth INR 130 Cr in July 2019, led by IIFL Asset Management and Lok Capital. Sekhar said that RenewBuy plans to expand its presence to 1,000 cities in India and also grow its customer base to 10 Mn by 2022.

According to Sekhar, the Indian insurance ecosystem is struggling to adapt to the technology-driven pace of change due to reasons such as traditional mindset, legacy practices and inadequate skills. This sluggishness could lead to a scenario where technology-adopting incumbents swallow the slower ones.

Overall, the Indian digital insurance platform market is expected to reach $165.02 Bn by 2024 at a CAGR of over 13% during 2019-2024, according to a report by TechSciResearch. While technologies like AI, IoT, and data analytics are considered crucial factors for this growth, Sekhar has a different opinion here.

In the Indian insurance tech sector, RenewBuy competes with Acko, PolicyBazaar and Toffee Insurance, among several others.