Revenue from operations rose 54% to INR 1.91 Lakh Cr for the reporting quarter for RIL

On the digital services and telecom side, Reliance Jio's net profit rose 10% year-on-year to INR 3,615 Cr for the December quarter

On the back of record revenue in consumer businesses, retail and digital services, Reliance Industries Ltd posted a consolidated net profit of INR 20,539 Cr for the quarter ended December 2021 (Q3FY22). The net profit has grown by 37.5% from INR 14,894 Cr reported in the year-ago period.

Revenue from operations rose 54% to INR 1.91 Lakh Cr for the reporting quarter as compared to INR 1.23 Lakh Cr in the same period last year. Overall, RIL reported an EBITDA of INR 33,886 Cr during the third quarter, higher by as much as 30%.

“I am happy to announce that Reliance has posted best-ever quarterly performance in 3Q FY22 with strong contribution from all our businesses. Both our consumer businesses, retail and digital services have recorded highest ever revenues and EBITDA. During this quarter, we continued to focus on strategic investments and partnerships across our businesses to drive future growth,” RIL chairman Mukesh Ambani said.

Meanwhile, Reliance Retail’s consolidated gross revenue rose 52% to INR 57,714 Cr, with a net profit of INR 2,259 Cr, 23% higher than the year-ago period. The retail giant said that as many as 837 stores were opened during the quarter, taking the total operational physical stores to 14,412. This could grow significantly if the company is able to close its acquisition deal for Future Retail, which has been stuck in legal issues since August 2020.

The Reliance stock closed the week at INR 2,476 on NSE, more or less remaining flat this week. Overall, the stock has risen 18.26% in the last one year. 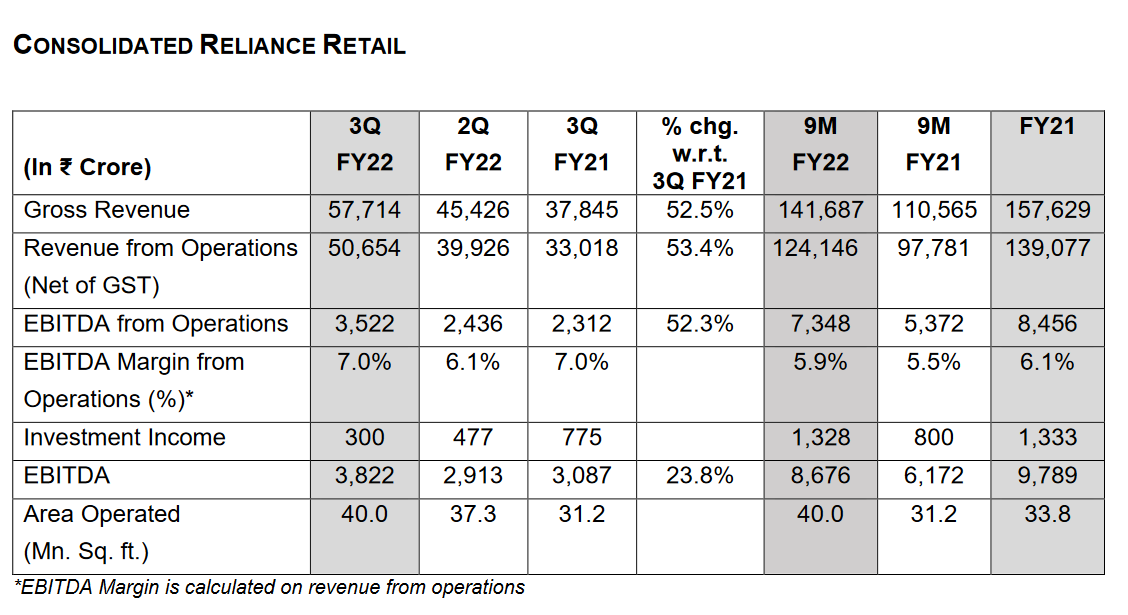 India’s richest man also added that retail business activity has normalised in the quarter with strong growth in key categories during the festive season.

“All time high retail revenues were recorded across all consumption baskets driven by highest ever store sales and sustained growth momentum in digital & new commerce. Consumer electronics and apparel & footwear doubled their business on the back of strong festive sales while grocery sustained its consistent and strong double-digit growth momentum,” the company said.

On the digital services and telecom side, Reliance Jio’s net profit rose 10% year-on-year to INR 3,615 Cr for the December quarter from INR 3,291 Cr in December last year. Revenue grew by 5% at INR 19,347 Cr compared to INR 18,492 Cr last year. More importantly, the average revenue per user (ARPU) for Jio also shot up significantly to INR 151.6 per subscriber per month, as against INR 143.6 in the previous quarter.

Jio’s total customer base stood at 421 Mn at the end of the quarter, with net addition of 10.2 Mn customers.

The company has invested $200 Mn for a 25.8% stake in Bengaluru-based Dunzo. The investment is part of a $250 Mn round and has pushed Dunzo closer to the unicorn club with its current valuation close to $775 Mn. Dunzo will enable hyperlocal logistics for the retail stores operated by Reliance Retail. It will also facilitate last mile deliveries for JioMart’s merchant network.