“I Was Most Nervous in Asking for a Selfie!” – When Kunal Bahl Met Ratan Tata

“I Was Most Nervous in Asking for a Selfie!” – When Kunal Bahl Met Ratan Tata 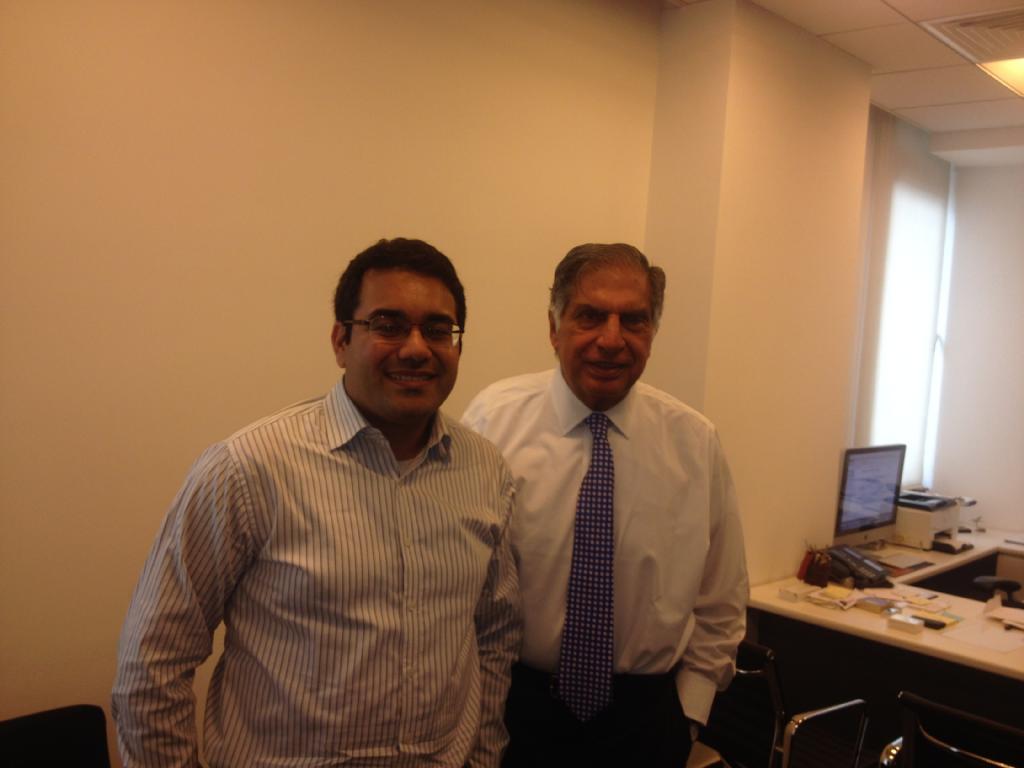 Yes, you know the face of angel investment is changing in India, especially when Ratan Tata himself speaks so fondly about an entrepreneur – in this case, Kunal Bahl, the founder of Snapdeal. Snapdeal was one of the first startups in the Indian ecosystem to have earned the hallmark of Ratan Tata’s trust when he started investing in startups in 2014.

In a very candid discussion titled “The Changing Face of  Angel Investment” at TiECON Mumbai 2016 entrepreneurial conclave held today, Kunal Bahl in discussion with Ratan Tata, laid bare the journey of his meeting with the Chairman Emeritus of Tata Sons. The discussion was as mesmerising for entrepreneurs and investors as was the thunderous standing ovation awarded by the august gathering to Tata.

Kunal retraced the journey of his meeting with Tata to a rapturous audience, starting from the day he received a call from an unknown person who wanted to set up his meeting with an investor without revealing the name. On realizing from the conversation that it was none other than Ratan Tata who wanted to meet him. Kunal hopped on to the next flight to Mumbai. But not before he had watched enough Youtube videos on the legendary businessman to anticipate what meeting him in person was going to be like!

Bahl, said, “I was extremely nervous. And yet when I walked into his office, expecting a typical big businessman like awe-inspiring environment with a huge office and big chairs, he simply pulled his chair next to me and said, Your growth story is amazing, but how do you do your logistics? And those were his very first words to me!”

He simply pulled his chair next to me and said, Your growth story is amazing, but how do you do your logistics? And those were his very first words to me!

While it was Snapdeal’s name which had caught Ratan Tata’s interest, his inclination towards investing in startups has been fuelled by his desire to understand the rapidly unravelling digital ecosystem. Said Tata, “After I retired, I saw a whole new digital world out there; marketplaces driven by handheld devices which will become the business places of India. It is still a learning experience for me to know about this virtual world. However, when it comes to investment, the virtual part is overshadowed by meeting with founders. When you (Kunal) left my office, I decided I would invest in your company.”

Kunal also revealed that while he was very nervous for the meeting, he was much more nervous to ask Ratan Tata the permission to take a selfie! Recounts Kunal, “I was most nervous in asking if we can take a selfie? To my dismay there was a second’s pause, which I guess was because he has been asked that a million times, but he instantly said yes, and it is one of my most memorable photographs! The validation came from my mother who said you are on the right track!”

While for Kunal, his mom’s validation mattered, what matters for Tata while making a quick assessment of who he wants to invest in is if the startup has an exciting concept. Said Tata,

I see if it is a worthwhile experience, if the concept excites me. What do I feel about the founders, what is his first impression? Is he only for short term? Does he have a passion for this sector because I am also a numbers person. And I realize that not all businesses will succeed.

No wonder, later in the discussion Tata also revealed how a founder’s value system is also an important criteria. He said, “One can only determine some one’s value system only once you watch them, their working and their organisation. Intuitively you can make judgements by observing how they operate their business; one must not confuse ambition and aggression. But I think everyone will agree that you really find out about a person’s value system in a crisis – the day you are threatened of becoming non-existent. That’s also a mark of leadership in terms of how you deal with it.”

The shades of this very value system were evident from Kunal’s comment on the importance of co-founders. He stated that he doesn’t know of many companies who were started by a single founder and became successful in a very short span of time. He added that it also depended on who you wanted to make the journey with. For instance, he and Rohit were best friends from school, so he could never imagine anything in business without his partnership. They shared a great personal equation and while in the early days, they might have had friction around professional decisions of the company, they always talked it out.

“I was most nervous in asking if we can take a selfie?

He summed it best when he said, “Even if we go into a room with two different opinions, when we come out, it will be one single opinion and it won’t matter whose opinion it was. There should be mutual respect for your co-founder. I don’t think there is a smarter person than Rohit that I have met in my life. I don’t know what he thinks of me but all decisions that require tremendous superior intellectual horsepower, I go to him and ask him what we should do and whatever he says, we apply our minds mutually and we do it.”

Responding to a query  by another panellist that “Ratan Tata investing” is the most popular headline in the newspaper, Mr Tata stated that he was of the view that one’s personal investments should remain one’s personal investments but unfortunately the media seems to make it an issue in the public domain. So talking light-heartedly about his plans, he joked that one doesn’t need to ask him, but read it in the media. However he reiterated that he had no plans, it will simply be driven by the founder’s view, the excitement one gets by the sector someone is in, the level of innovation, and because “you are proud and happy to be a part of it.”

In the discussion, he also revealed his take on the disruption happening in the Indian ecosystem. Said Tata, “Any business, as we go back in history, has a small number of people who want to be disrupted, want to reach a new plateau, they see an opportunity, something that’s not been tried. There are progressive companies who want to build the future and there are a large numbers of companies which protect their investments in the sector and fight the mavericks that come in. And so it is a transformation that you are seeing today.”

He added that companies that are heavily invested in brick and mortar or in traditional form of business see digital world as a disruption. They would like it to fail, they would like it not to succeed, and the fact that it is knocking their feet under them, makes them bitter. However instead, they ought to see how best they can adapt to given times. “If we look at changing times, we tend to respect people who can change and adapt with time. We are going through a transformation in India. We have over a billion cell phone owners, many smartphone owners and they carry in their pockets a virtual retail outlet. Is that disruptive? No it’s evolutionary or even revolutionary. Because it addresses a section of population which could never be addressed with the physical connectivity we had. So now there is more opportunity, my advice would be to change the mindset.” 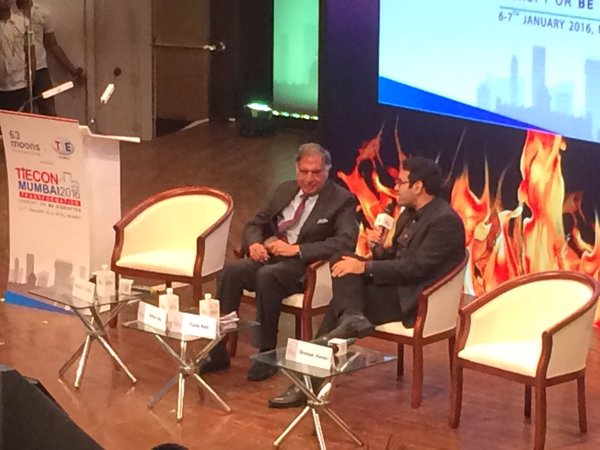 Kunal also seconded his opinion on his mindset towards disruption when questioned about the companies which Snapdeal has acquired in the last year. He said, “I don’t think we have the best ideas or monopoly over best people. I feel the best people are starting their own companies. And the only way for us to be a long term sustainable company is to have a good number of high quality people. And give them a larger canvas, a larger role so that their entrepreneurial ambitions also come to fruition.”

Lastly, when questioned if Ratan Tata’s investment in Snapdeal has been a good luck charm for Snapdeal’s growth in 2015 in every aspect from funding to valuation to becoming a leader in every aspect, Kunal stated, “Is there a doubt! Mr Tata’s investment happened last August. 95% of the capital we have raised as a company was after that! So he is much much more than a good luck charm!”

“Is there a doubt! Mr Tata’s investment happened last August. 95% of the capital we have raised as a company was after that! So he is much much more than a good luck charm!”

Needless to say, while Tata’s investment is seen as a hallmark of trust for the company invested in, and hence provides a major boost to its credibility, it’s his faith in the passion of the founders that is probably the best one can ask for. For what couldn’t be sweeter words for Kunal to hear from the legend himself, “Everything good that happens to Kunal is very pleasant to me.”