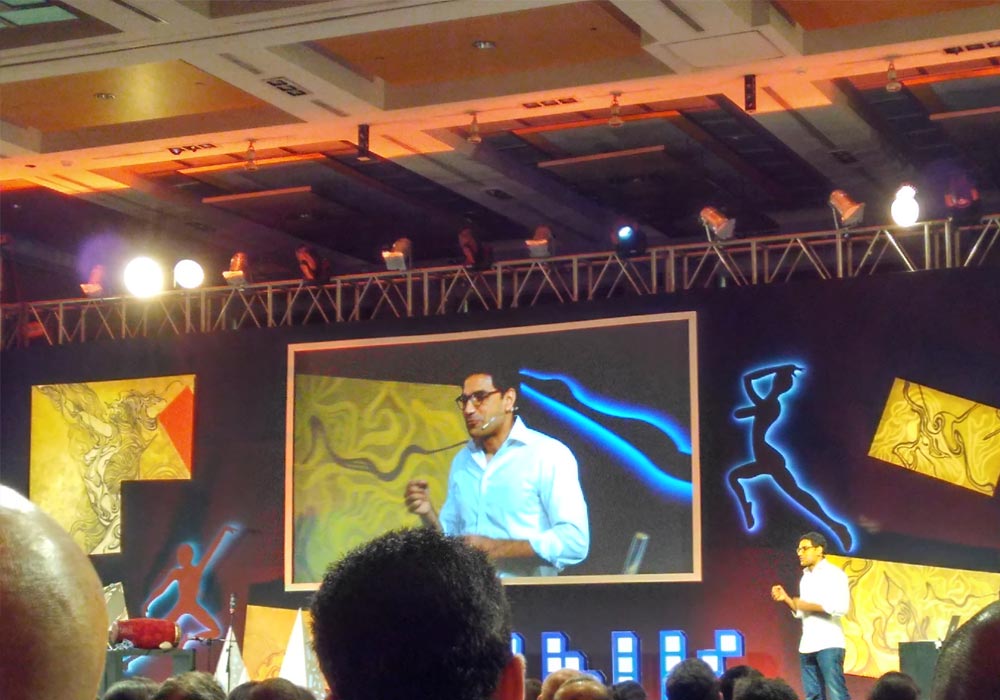 “All good things in life take more time and money than you think,” told Pranay Chulet, CEO of online classified platform Quikr, to a rapt audience at the recently held Mumbai INKTalks on Saturday ( October 17). Surprisingly, the CEO of the tech startup valued at about $1 Bn was not referring to Quikr when he said this. He instead was talking about an interactive movie that he had made in 2005 while his stint in the US as a management consultant for a media company.

The session was a revelation of the importance of creativity in his journey as an entrepreneur, which he aptly started by saying, “I am an entrepreneur because I am a creator. All through my life, if there is one thread that’s common, it’s the thread of creating something.” It is this thread which goaded him to learn filmmaking while in the US and then propelled him to launch Quikr in 2008, inspired by his experience with Craigslist whilst making his movie.

Acknowledging that Craiglist the inspiration behind Quikr, Pranay stated, “I noticed at that time, such a platform did not exist in India and it totally came from an unrelated area. In fact, in a week or two, we will be announcing an investment in an entertainment marketplace, so we can say that in life is coming full circle for us.”

When asked about the Indian market in general and the competitive landscape in terms of pre-owned goods, Pranay stated that there is growth because of the external non –India factors such as China and it will see its ups and downs. “But if you see the tail wind from the consumer’s side, it is pretty strong and a lot of businesses including ours are benefiting from it and will continue to grow fast.”

He added that in the last 12-18 months, Quikr’s playground has become a lot broader. Though it sees key competition from Olx, but then they are one of the many it is competing with. Quikr closely competes with Olx in the C2C transactions space.

“But down the line, I have realized that people are not realizing how big Quikr is be it homes, or cars, or jobs, or services, which is why we undertook this verticalization thing. So now, besides them, we have competition from 99acres, MagicBricks and Carwale among others. In services and jobs we don’t see much competition as the companies are operating in those categories are still smaller, younger startups.” he said.

“Profitability is a good thing to have. We don’t have it yet, but we are looking to become profitable in 1.5-2 years.” He further added, “Valuations may go through ups and downs as the industry grows. But the reality is that whichever companies are successful five years from now, you can mark my words, that today’s valuations will look like great deals at that time. It’s just as difficult to spot the winners.”

On the funding front, having raised about $150 Mn from its existing investors Tiger Global Management, Investment AB Kinnevik and first time investor Hong Kong-based Steadview Capital in April this year, Quikr, currently, is not looking to raise any further funding. He added that company is just focusing on building these verticals.

When a company starts growing fast, it becomes difficult to maintain the same level of quality which it had when it just a small team and some people go wrong there. They just get so intoxicated with the numbers driven growth, keep watching the numbers chart and don’t look at what is happening to the user’s experience. For Quikr, that was a tricky thing but they stayed true to the cause.

The second problem Quikr faced was access to talent. That’s why they moved their headquarters from Mumbai to Bangalore. It was a tough thing for them to go through so much change, but he added it was the right thing to do as in Mumbai, they would not have been able to grow that fast.

Recently, the company was in news for being in the fray for the acquisition of realty portal CommonFloor at about $160 Mn. Pranay stated that while Quikr has done some small acqui-hires and some investments, but as of now hasn’t acquired CommonFloor. But is looking at multiple acquisitions.

He added that there are two ways to grow the company. One is by building it yourself which is a very valid option for Quikr in all the categories. “We have five verticals, Quikr C2C which comprises payments and logistics, Quikr Homes, Quikr Cars, Quikr Jobs and Quikr Services( which will be launched soon-the team is still working internally on the launch, so we will have to wait to hear from them.) . We will stay with these five. Within these, we already have a running sizeable business. So we don’t need to acquire to get into a new area. So our dependence on acquisitions is relatively low.” he added.

But that being said, he added that their name being Quikr, they try to stay true to that value and to move fast. So, if something will materially add value to them and increase their speed in becoming bigger in these spaces, they will look at it. He stated, “ But I will just use the words of the legendary Warren Buffet, “Good assets at a fair price.” So not bad assets at a bad price and neither good assets at a very high price are worth it because we already have a business.”

If one looks at it revenue-wise today, Quikr Homes and Quikr Services are far bigger than the others and Quikr Jobs is climbing up fast. Cars in general is a lower revenue category. There is obviously advertising revenue from OEMs in this vertical, but that’s easy money and doesn’t scale beyond a certain point. He added that he does see Quikr cars climbing but over a period of time. Quikr Jobs is however expected to become big for them very soon.

Listing wise, Quikr Homes, Quikr Cars and Quikr C2C score in that order. If one looks at it responses wise, Quikr C2C is quite big for Quikr. The company will be ramping up the inspection services it provides in Quikr Cars. Right now, it is the only portal which provides consumer cars inspections, which it wants to scale up more.

Services as a sector is coming up in a big way in India and a lot of tech startups are have entered this space. As per market estimates, the home services industry in India is a $100 Bn opportunity. Pranay, however believes that services is a very hard problem to crack at a small scale.

He added, “We did not venture deep into services till we were of a very large size because services is a very fuzzy area. People have different expectation levels as far as services are concerned. For instance, I like my house clean in a certain way and someone might like it at a different level. So you need different quality levels which will have different price points. In my view, if you are a young startup trying to start a services marketplace, it’s very hard. I know there are some 50 odd young startups that have got funded in the last one year. It’s fashionable now to say that I will become the Uber of this and that, but I don’t think it’s very easy to standardize things in this area.”

On other sectors and industries, he felt that there are lot of good sizeable marketplace companies that have come about and there will be more and more innovation in that area, with maybe more specialised ecommerce companies coming up in the future.

He stated, “ I don’t feel that there in any saturation in ecommerce space. In fact, the fun has just started in the innovation in this space. I feel we are different than any other major market in the world. We are so mobile dependent. So far, the bigger companies that you have seen have been inspired by the Western models. But there is no question, as we go more and more on mobile, you and I will see new models that we can’t imagine today. So I think we will see a lot more innovation in these things.”

He also added that personally he expected to see some big things in variable computing, security, online video, etc.

When asked about what advice he had for startups looking to get funded, Pranay said that startups should build their business as they want to and not with the intention of raising financing. He believes in the mantra that good things happen automatically. If one has a good business, people will want to invest in it. Though of course he added that it doesn’t work perfectly always. For instance if the market goes soft, early stage companies can have trouble raising financing. He concluded aptly, “Beyond a certain scale especially, you should just do the right thing for the business, and you will find investment.”