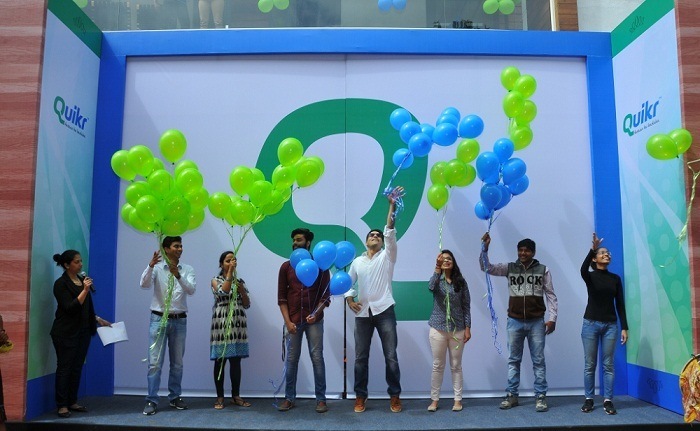 Its name is Quikr and it moves fast! Staying true to its value, online classified platform, Quikr, moved into its new swanky office in Hebbal, Bangalore in just a matter of four months, since work started on the new building.

Leaving the ramparts of Mumbai, Quikr zeroed in on an old garment factory in Bangalore as an ideal choice. And why was that so? It was the high ceilings and the big windows which create a sense of open space that caught the attention of this unicorn! While the external structures have largely remained the same, several walls have been knocked down on the inside in keeping with its emphasis on transparency. In the same vein, all the conference rooms are also glass panelled.

The video below illustrates the building’s transformation from a garment factory to Quikr’s workshop!
[youtube https://www.youtube.com/watch?v=fMtivg46GeI]

Perhaps the most interesting feature in the main building is the upper deck which is actually a machan or a deck like space that can be used as a meeting space. The deck resembling a DJ’s booth, offers the best view of the main building including the logo painted in the atrium- a giant Q on the main floor that invokes a sense of pride and symbolically ties everything together. 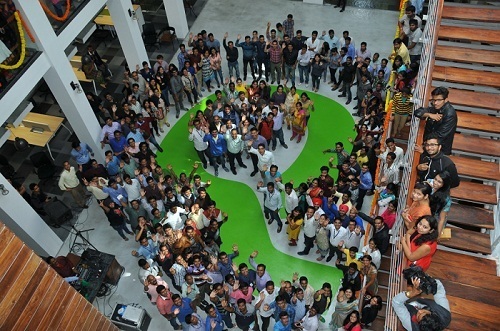 As far as the money spent on the new office, CEO Pranay Chulet’s reply was simple, “Much less than what you think.”

The new four acre campus house five buildings out of which two are currently operational with seating capacity of more than 1,200 people. Dotted with a lot of green patches, the campus has an open cafeteria, with a new recreation centre to follow soon in one of the buildings. The campus took about 3-4 months to get ready and it has become operational in phases since Quikr shifted base from Mumbai to Bangalore in search of talent. 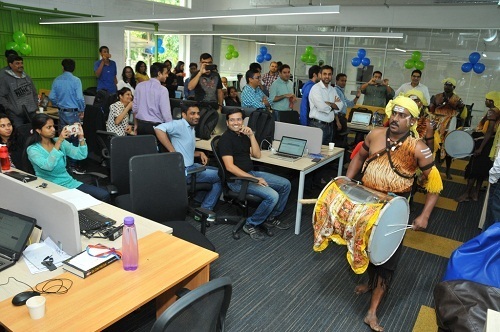 Speaking to Inc42 earlier, Pranay had stated that it was a tough thing for them to go through so much change, but he added it was the right thing to do as in Mumbai, they would not have been able to grow that fast.

He adds, “We have been rolling on the winds of change for a while now and it’s great that we have space brimming with energy as our Bangalore HQ. ‘Asaan Hai Badalna’ is not just a brand tagline for us but an embodied belief. We believe change is good and easy.”

One could not agree more. From the start of its entrepreneurial journey in 2008 to a valuation of more than $1 Bn, the startup has grown at an energetic pace. Today, it is one of the leading cross-category classified platforms in India, with 30 Mn unique users a month. With the launch of Quikr Services last month, it will now take a shot at cracking the $100 Bn home services market in India.