The Question Is Why? – An Entrepreneur’s Perspective Of The 2014 General Elections

The Question Is Why? – An Entrepreneur’s Perspective Of The 2014 General Elections 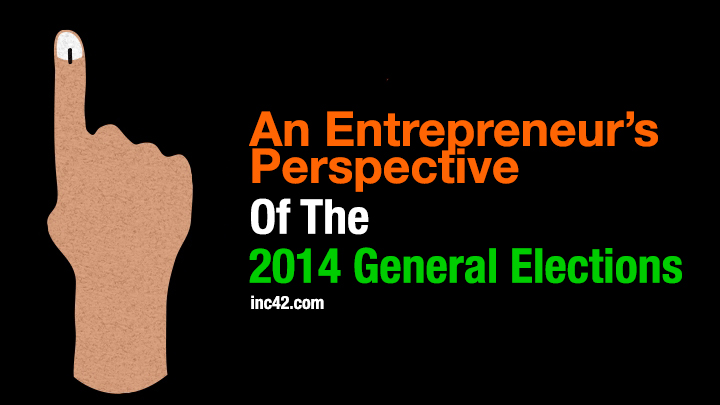 We are all excited about the 2014 general elections aren’t we? A majority of us would be inclined to accept that there has been an increase in the curiosity amongst the young Indians in elections and politics. (The question is) Why? Wait a minute. Isn’t this blog supposed to be about startups? Yes. We are getting there.

Our PM got older, our phones got smarter, and the mainstream media went more mainstream and a bunch of other such explanations. Yes they are all true, but only to an extent. The major reason is that these politicians are now all over Facebook and Twitter, the place where we spend as much time as we spend breathing. The two Silicon Valley startups that have had a great influence on the US presidential elections are now naturally playing an equally significant role in the largest democratic elections ever. Few thousands of smart people in these start ups influencing an 800 plus million election. Wow! Now we are getting there aren’t we? No. Don’t even think about starting a Facebook or a Twitter all over. We are too late.

These two startups have given us voice and created a buzz amongst us about politics but they do that to almost any topic, not just politics. So what about the startups that deal only with politics? Now we are getting there.

The 2012 US presidential elections have triggered the launch of quite a good number of technology startups in the US. From Klout, a website and mobile app that uses social media analytics to rank its users according to online social influence, which gained traction by comparing scores of politicians to Change.org, a free petition tool for 65 million users have all seen lime light during that period. There are bunch of other interesting startups like Rally.org , Nation builder, Targeted victory that have had good traction and raised venture capital to the tune of a tens of million Dollars and a couple of startups even had quick exits. Of course, there are hundreds of startups that struggled and failed to make an impact. The question here is not about the success or failure but about the approach. Billions of dollars are spent on the election campaigns and everyone is aware of that. There was a huge opportunity and they were up to the task.

Alright let’s go back to India. The largest democratic elections ever, over 800 million voters, even Google wanted to be a part of it (for obvious reasons), but were not allowed (again for obvious reasons). Surprisingly we do not see many Indian start ups emerging out of this opportunity. Yes there are a handful of startups but the number is quite low compared to the opportunity. I haven’t seen a breakthrough yet, not even some news about funding (may be one).

Huge market size both in terms of the users and potential revenue, opportunity of being the first players, good number of inspirations globally to replicate models locally, access to talent are all the factors favoring more startups this political season. Talking about the cons, I know a Mumbai based Big Data Analytics startup which came up with a result predictor algorithm which predicts the odds of a candidate winning the elections based on different social and political parameters. They gave a demo of it to a major political party and were bewildered after facing this question “What if your software predicts a particular candidate to win the election but doesn’t actually end up winning the election?” Oh God! One can expect the consequences. Well this was one particularly odd example but I am sure there are many good ideas which don’t complicate your life so much and yet provide a possibility of creating a great product/ business.

Are we not aware of it or are we not just up to it to make the most of the opportunity? What’s stopping us? Why aren’t we doing it? Why?

[Contributed by Varun, co-founder of Mauka. An ardent fan of Steve Jobs and Yuvraj Singh. He is a 2012 Fellow in the prestigious Startup Leadership Program.]