From Deals And Coupons To Price Comparison: GrabOn Looks To Reach 3 Mn Users With BestPriceOn

From Deals And Coupons To Price Comparison: GrabOn Looks To Reach 3 Mn Users With BestPriceOn 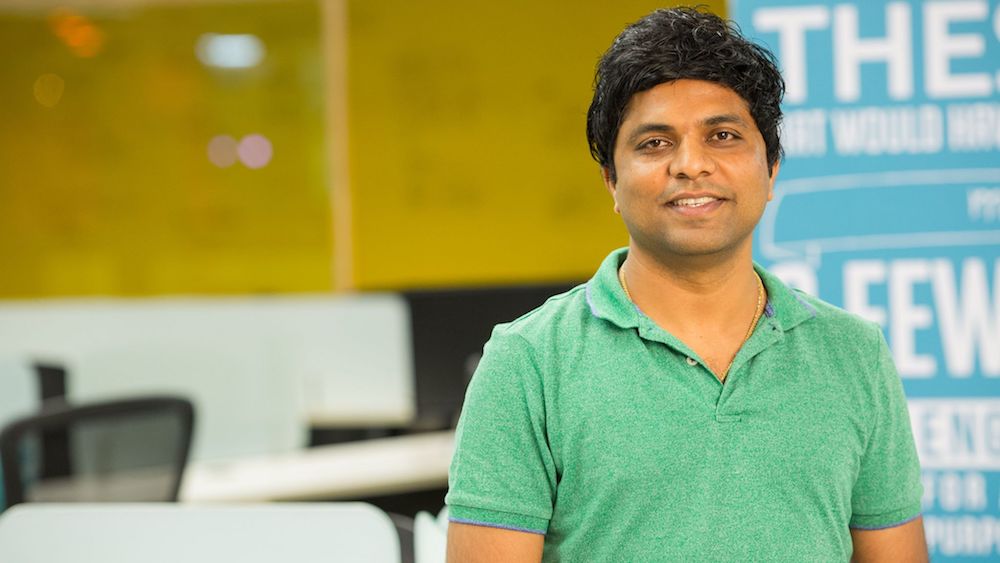 Hyderabad-based deals and coupons startup GrabOn has launched a new platform BestPriceOn. With this move, the four-year-old startup has made a foray into price comparison market in India.

Ashok Reddy, the CEO and founder of GrabOn says, “29 Mn phones were shipped to India in Q1 FY ‘17, as per a market research firm Counterpoint report. The average Indian buyer makes online searches nearly 10 times before actually making a smartphone purchase. With BestPriceOn, we aim to capture 10%-15% of this price comparison market in the next two years.”

So what led Ashok to enter into the similarly crowded price comparison market? Is the coupons space near saturation. His reply: a resounding no.

“Between the period 2012-2016, research firm Forrester predicted the deals and coupon industry is expected to scale up by an annual 57%. This is, in fact, a great time to be in the coupons and deals space. GrabOn, when it started, was all for revolutionising the performance marketing space. Price comparison is an extended segment for performance marketing. It was eventually going to get added to the GrabOn’s features list, which we finally did but with a technology innovation flavour.”

BestPriceOn is banking on two things to stand tall of the competition – a differential UI and artificial intelligence. Commenting on the AI system,  Ashok says, “What do you do when you’re not sure of something? You log onto Google and search for whatever comes to your mind, the way you speak with others. Basically in your natural language and you get the most relevant results. We wanted to provide a similar ease of use to the user so that they can query for the gadget, with features, the way they like to provide the most relevant gadgets, which is a huge advantage for the user.”

Here, AI has been used in combination with curated NLP (Natural Language Processing) search and Machine Learning.  With this, BestPriceOn lets users search for products by using simple terms. As claimed by GrabOn, even with layman terms and keywords, the search results have been exceptional. For instance, one can write, “best mobiles under 10,000 with 2GB RAM’ or ‘washing machine with front load and fully automatic technology above 6 liters.’ 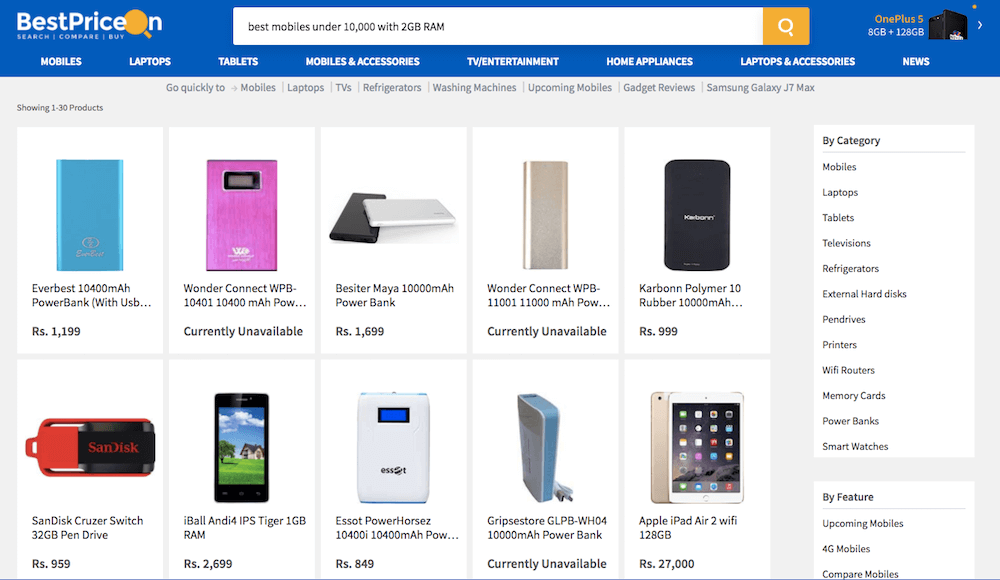 Ashok further elaborates with, “The current price comparisons happen only when there is an exact string match and this tech can be compared to the experiences one faces when conversing with a chatbot on a travel website. The bot understands only a few keywords.

BestPriceOn, unlike the rest, has a core with Natural Language Processing abilities that make the search as good as the one you experience on Google. The on-page content and technical aspects in place help users make informed buying decisions, thus making for an experience unlike no other.”

This inbuilt technology helps to recommend the curated personalised choices for the user based on his/her shopping activity and search behaviour on the platform. “In the backend, we have algorithms that learn from user behaviour – which results did the users like the most and that helps us improve on them. We’re also working on enhancing the queries via these algorithms to find out and adapt to what and how the users are searching,” adds Ashok.

BestPriceOn went into beta in January 2017. During the beta phase, it claimed to see a 286% elevation in organic traffic and a 300% increase in direct traffic, compared to the last quarter. “The responses have been overwhelming, thus pointing to the success of the implementation of Natural language processing in the price comparison space,” says Ashok.

In terms of monetising, the company is going the traditional way: looking at the commission based models like Cost Per Click (CPC), Cost Per Mile (CPM) and Cost per Sale (CPS). The team also plans to work with affiliate partners and directly with merchants. As Ashok reveals, revenues are going to be in two streams – performance marketing and campaign management.

The team further plans to grow over 100% month on month, reaching two to three million unique users and over 10 Mn pageviews every month by end of 2017. In terms of GMV, with the current growth rate, the team expects to do over $1.5 Mn (INR 10 Cr)/ per month, by the end of the year.

Also, while some players like IndiaBookStore.net, PhoneCurry.com, BuyHatke are still into pure play, many like MySmartPrice has pivoted to the horizontal ecommerce marketplace model, enabling direct purchases for consumers.

The sector gained attention particularly in Indian ecommerce around 2012, on account of the ease of comparing the same products on several ecommerce portals at one place. As per a September 2014 article on IndiaOnlineSeller.com, online shoppers used to spend 48 hours to narrow down on one product in 2012, only to know later that the discount has been gone or the product is now out of stock.

Price comparison websites have thus acted as a sort of search engine for ecommerce products:  where a user can get all the information regarding price, features, discounts and then be re-directed to the ecommerce website for the eventual purchase. This exercise has also helped in reducing cart abandonment rates for the ecommerce portals as the customer enters the website knowing what he wants.

Naaptol, launched in 2008, was one of the early players in this space. However, even with its 360-degree approach to television selling, online website, and a price comparison portal, the startup was not able to make a mark.

Today, the market is crowded with players like MySmartPrice, PricePanda, Amazon’s Junglee, PriceDekho, CompareIndia, CompareRaja, ShoppingWish, Smartprix and more. Ashok does accept that competition is present in the space but talks about how BestPriceOn looks at challenges.

“The key challenge for us would be the sheer amount of competitors in the market, at the moment. However, we aim to deal with this clutter through our unique product features like industry first AI augmented search engine which will make finding products easier than Googling!”

Ashok also has some key stats to support the BestPriceOn venture. The price comparison space in India is expecting a significant growth from 2016-2020. In terms of available market opportunity, today, 65% of online shoppers spend at least 15 minutes on price comparison websites while making online purchases. 95% of online shoppers devote a substantial amount of time to find the best offer & price. Customers viewing experience on a comparison shopping engine are twice as likely to convert into a sale.

As Ashok sees future trends in the price comparison space, “With the rapid increase in technology, searching and finding an array of products in the same class will take precedence. The long-term future of price comparison websites looks good as long as they are keeping their processes simple, clean, and informative. Building brand value and trust goes a long way. Personalisation and decision intelligence will be the key drivers in this space and BestPriceOn is trying to bring those as features for the users.”

GrabOn: The Other Tech Innovations Introduced Since Launch

GrabOn, ideated in 2013 and commercially launched in April 2014 by Ashok, is operated by Landmark IT Solutions. The platform presently offers users deals and coupons across all verticals – from fashion to food and everything in between. Dominating categories are travel, recharge, hyperlocal, and groceries.

The GrabOn mobile app was launched in December 2016, along with a shopping assistant – GrabOn Shop Assist. It helps users in getting personalised deals and coupons from all over the web. Prior to that, in March 2016, GrabOn also opened its first ecommerce office in Hyderabad spread over 12000 sq.ft. area. Earlier, in July 2015, it also came up with a new feature ‘Buzz Me’ – a personalised notification pop-up on the user’s desktop. Google Chrome extensions with auto-application of coupon codes was another milestone the company achieved during the same period.

GrabOn is one among the late-stage adopters of the deal and coupons business model in India. Incumbents include established names such as MySmartPrice, Junglee, Pricepanda and more. But, due to escalating demand versus supply, the market is also ripe enough to enter as Ashok suggested.

GrabOn is a bootstrapped startup that has also managed to achieve profitability for the last three years. The revenues have stayed the same year on year and the market share has doubled in the same period, as claimed by the company in an official statement. Also, the company has done its share of innovations in the past three years.

GrabOn has clearly understood the concept of making a value add for the online retail consumer. First with aggregating deals and coupons under a cohesive platform and now a price comparison site BestPriceOn, Ashok and team are looking to provide a solution at all the pitstops of the online consumer shopping experience. But, competition is rife and the consumer is always on the lookout for the most bang for the buck. In such a scenario, how GrabOn is able to first make a splash and then sustain growth while providing value for their consumers will decide the fate of the startup.