The PM has over 53 Mn followers on Twitter alone Everything India Prime Minister Narendra Modi says or does becomes a trend on its own. But seems like social media handles will have to take a pause, as Modi looks to take a breather from social media, at least temporarily.

In India, Modi’s social media presence has been built as a way to connect with citizens, but it has also formed a band of die-hard Modi followers on social media, which is no less than a cult at times as seen in the latest episode.

The tweet has not only taken social media by storm but has also managed to upset the very fans that have made Modi one of the most followed personalities on social media.

Arun Yadav, head of the Haryana state IT and social media for BJP, took to Twitter expressing regret. Many others also joined in with similar tweets for the Prime Minister’s plans.

Meanwhile, Rahul Gandhi, president of the Indian National Congress which is part of the opposition, tweeted back to Modi in reference to recent violence in the national capital and allegations of involvement of BJP leaders in the riots in Delhi. 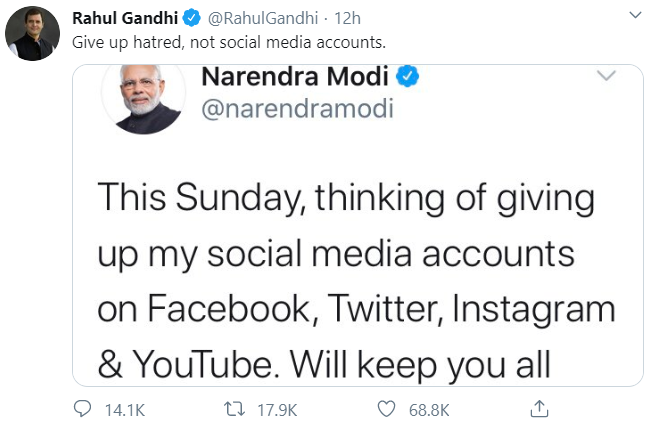 The fact that Modi has planned his “exit” from social media on March 8 has also been picked up on by some personalities on social media. March 8 is International Women’s Day, which has fuelled speculation of this being a teaser for a possible takeover of Modi’s account on Women’s Day.

“One of my friends who is senior staffer of one of the SM @narendramodi wants to leave told me : it’s possibly a teaser. It could be women’s day gimmick. For a day his accounts on different platforms could be ‘taken over’ by selected women. Btw, he was bit nervous,” Sheela Bhatt of Newsx tweeted.

A few hours later, Modi confirmed Bhatt’s claims by officially announcing a #SheInspiresUs campaign, asking users to recommend inspiring women, who would get the opportunity to handle his social media handles — Twitter, Facebook and Instagram — for a day.

This Women’s Day, I will give away my social media accounts to women whose life & work inspire us. This will help them ignite motivation in millions.

Are you such a woman or do you know such inspiring women? Share such stories using #SheInspiresUs. pic.twitter.com/CnuvmFAKEu

“Select entries get a chance to take-over @narendramodi’s social media accounts and share their thoughts and ideas with the world!,” PM Modi Tweeted.

In any case, there has been plenty of others as well who have riffed on Modi’s tweet. Healthie cofounder Rajesh Sawhney also joined in: 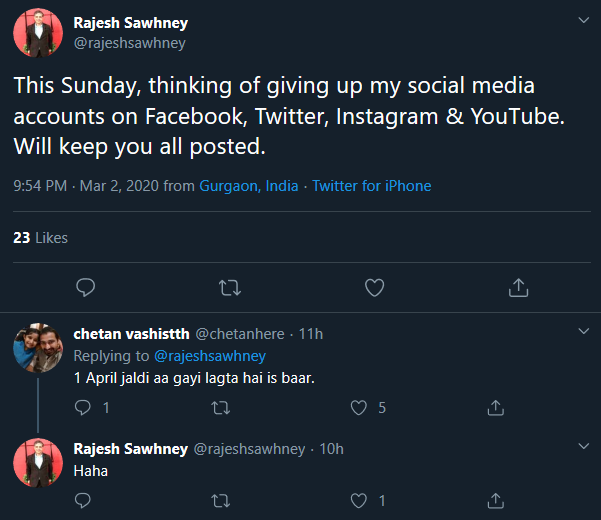