PM Modi Kicks Off His Silicon Valley Tour With A Ride With Elon Musk, Says Building I-ways As Important As Highways

PM Modi Kicks Off His Silicon Valley Tour With A Ride With Elon Musk, Says Building I-ways As Important As Highways

Probably there could not have been a much better way to show how important for PM Modi are renewable and alternative sources of energy, than by touring the Tesla Motors facility at Palo Alto in a battery powered car. Adding on, an interaction with Tesla’s CEO Elon Musk would have given him enough idea about what could drive the automobiles in the future as well as how renewable energy could be used to address many issues back home such as that of farmers.

The PM summed up his interaction with Elon Musk in a tweet: 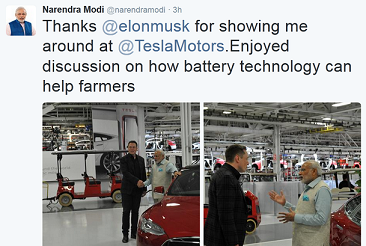 Later, Elon Musk stated on the visit, “Prime Minister Modi and I talked about electricity generation and how there are ways to skip ahead with it as with cell phones.” 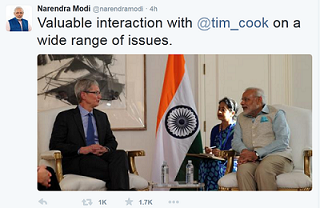 Tim Cook said, “We have a unique tie with India. Our founder Steve Jobs went to India for inspiration.”

The PM also attended a “Digital India” with select tech executives from the Silicon Valley including Tim Cook, Satya Nadella and Sundar Pichai. 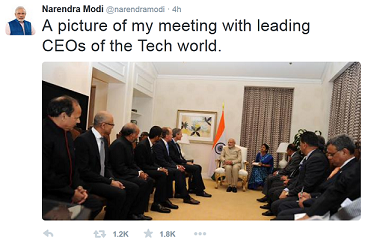 The thrust of the PM’s visit is to focus on increasing partnership between India and US in the digital economy and to experience and learn first-hand the success story of iconic companies and leaders in Silicon Valley with the sole objective of building a similar ecosystem of innovation and entrepreneurship in India. The PM tweeted about his interaction with the who’s who of the tech world as follows: 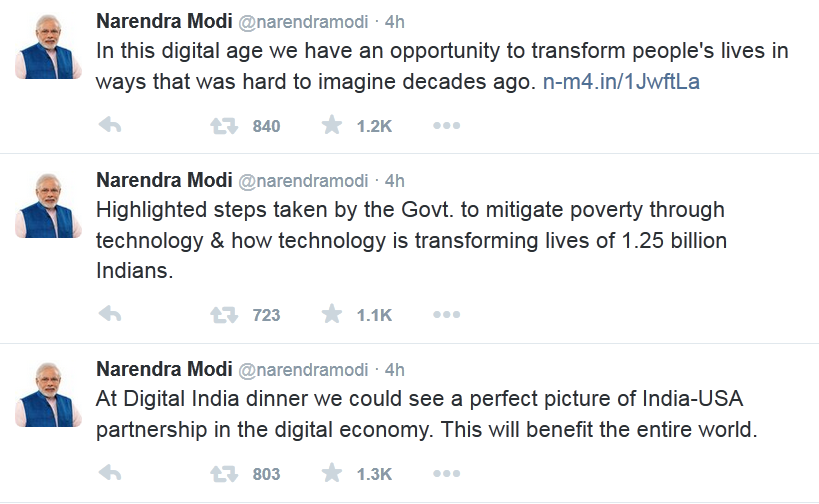 The PM started off his speech at the dinner by stating, “If there was ever a gathering under one roof that could claim to be shaping the world, it is this. And, I am not talking about those in public office, here or in India! It’s a great pleasure to be here in California. It is one of the last places in the world to see the sun set. But, it is here that new ideas see the first light of the day.”

Speaking on the ever increasing presence of technology in daily life, he said, “Google today has made teachers less awe-inspiring and grandparents more idle. Twitter has turned everyone into a reporter. The traffic lights that need to work the best are on Cisco routers. The status that now matters is not whether you are awake or asleep, but whether you are online or offline. The most fundamental debate for our youth is the choice between Android, iOS or Windows.”

“From computing to communication, entertainment to education, from printing documents to printing products, and, now to internet of things, it’s been a long journey in a short time. From cleaner energy to better healthcare and safer transport, everything is converging around the work you do.” he said.

He also said, “We want to free our citizens from the burden of excessive paper documents in every office. We want paperless transactions. We will set up a digital locker for every citizen to store personal documents that can be shared across departments. We have set up Ebiz portal to make approvals for businesses and citizens easy and efficient so that they concentrate their energy on their goals, not on government processes.”

The PM added that he wanted to ensure that technology is accessible, affordable, and adds value. He outlined a number of measures the government will take to make 1.25 Bn Indian citizens digitally connected, “We have launched an aggressive expansion of the National Optical Fibre Network that will take broadband to our 600,000 villages. We will connect all schools and colleges with broadband. “

He added, “Building I-ways are as important as highways. We are expanding our public Wi-Fi hotspots. For example, we want to ensure that free Wi-Fi is not only there in airport lounges, but also on our railway platforms. Teaming up with Google, we will cover 500 railway stations in a short time. We are also setting up Common Service Centres in villages and towns. We will also use information technology to build smart cities.”

The PM also stressed on the importance of partnership between India and the United States towards achieving this goal. He said, “From large corporate to young professionals in this great centre of innovation, each can be part of the Digital India story. Today, we speak of India-U.S. partnership as a defining partnership of this century. It hinges on two major reasons. Both converge here in California. We all know that the dynamic Asia Pacific Region will shape the course of this century. And, India and the United States, the world’s two largest democracies, are located at the two ends of this region. We have the responsibility to shape a future of peace, stability and prosperity in this region. “

“Our relationship is also defined by the power of youth, technology and innovation. These can ignite a partnership that will advance and sustain prosperity in our two countries. Even more, in this Digital Age, we can draw on the strength of our values and partnership to shape a better and more sustainable future for the world.”

Speaking on the role of technology in empowering governance he said, “Today, technology is advancing citizen empowerment and democracy that once drew their strength from Constitutions. Technology is forcing governments to deal with massive volume of data and generate responses, not in 24 hours but in 24 minutes. We will transform governance, making it more transparent, accountable, accessible and participative. I spoke of E-Governance as a foundation of better governance – efficient, economical and effective.”

He added, “I now speak of M-Governance or mobile governance. That is the way to go in a country with one billion cell phones and use of smart phones growing at high double digit rates. It has the potential to make development a truly inclusive and comprehensive mass movement. It puts governance within everyone’s reach.”

Today, Modi will visit the headquarters of social network giant, Facebook, where he will hold a town-hall meeting with Mark Zuckerberg. He will then head to Google, part of his strong push to drive technological innovation in India. He will also attend the first India-U.S. Startup Konnect in the Silicon Valley being hosted by NASSCOM, TiE, and IIM Ahmedabad’s CIIE India, to highlight the strengths of the Indian startup ecosystem. He will be visiting the exhibition where more than 30 Indian startups selected for this program will exhibit their products, prototypes, and achievements to investors and other potential Valley partners.

Back home, startups are expecting him would be to create more visibility for Indian startups in the Silicon Valley to make way for more alliances amongst startups based in the two countries. They are also hoping a slew of announcements to be made by him in order to foster a healthier startup ecosystem in the country and ease the red-tape problems and other bottlenecks faced by them. The coming days will throw more light on what exactly will change for startups post this visit.