In February, Indian govt has launched a draft ecommerce policy 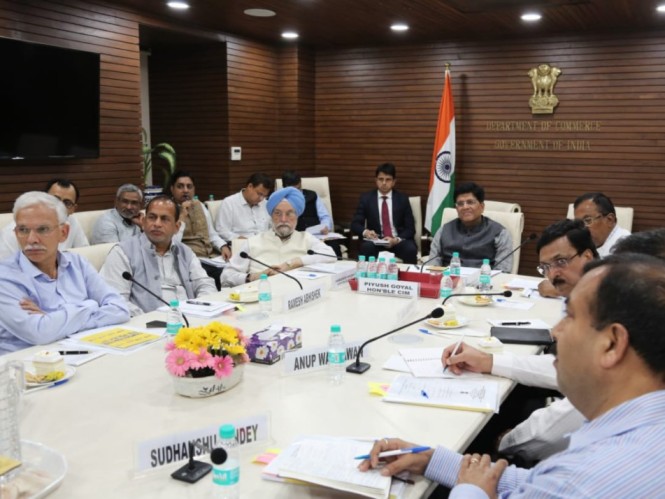 Indian minister of commerce and industry, Piyush Goyal conducted a meeting with representatives of Indian ecommerce companies, yesterday on June 24.

The meeting was called to carry out an in-depth discussion on ways to boost the India ecommerce market and thus benefit both the small Indian retailers and ecommerce consumers.

Tweeting about the meeting, Piyush Goyal said,  “Concluded a detailed discussion with representatives from ecommerce companies a short while ago, and deliberated ways to boost e-commerce in the country, resulting in a win-win situation for the small domestic retailers and the consumers.”

Interestingly, the meeting did not see any representations from the online retailers. However, supporting small domestic retailers have been a key agenda in the latest FDI ecommerce guidelines which had sought to create a level-playing field for all online retailers and to promote domestic sellers.

All India Online Vendors Association (AIOVA) also responded to the Goyal’s tweet and said, “Again no representation from the sellers. You are going on the wrong path. Same as your predecessors.”

The policy has also directed the companies to set up data storage in India to store the data of Indian users. The draft also supported the review of the current practice of not imposing customs duties on electronic transmissions.

According to the Draft National Ecommerce Policy, ecommerce companies will be prohibited to store consumer data with third party entities even with consumer consent.

Also recently at the G20 Trade Ministers’ Meeting, Goyal had said that countries must have sovereign right to use their data including personal, community, and public data, for the welfare of people, and advocating for free trade should not be necessarily lead to justification of data free flow.

Further talking about the requisites for making global ecommerce rules, he said, the issues of privacy and security should be given due consideration in the debate on free flow of data with trust.

This is in contradiction to the WTO proposal circulated on April 26, in which Japan was noted saying “each member shall allow cross-border transfer of information by electronic means, including personal information, when this activity is (for) conduct of the business of a person of members.”

“No member country shall require a foreign operator of member countries to use or locate computing facilities in that member’s territory as a condition for conducting business in that territory,” the proposal added. Japan’s demands closely align with the demands made by other developed countries such as the United States.

To which, Piyush Goyal had said that developing countries like India need time and policy space to build a deep understanding of the subject and formulate their own legal and regulatory framework before meaningfully engaging in global ecommerce rule negotiations.

While, the traders’ organisation Confederation of All India Traders (CAIT) had expressed its satisfaction over the release of the draft of ecommerce policy. Other industry bodies such as the Internet and Mobile Association of India (IAMAI) had said that the draft ecommerce policy will reduce the FDI flows in the ecommerce sector which is the backbone for its development.

International companies and some governments have also criticised India’s ecommerce policies at various levels. Most recently, during India-US bilateral talks held in May, Wilbur Ross, the US secretary of commerce had said that the Indian draft ecommerce policy favours domestic players and hence it does not ensure a level playing field for foreign companies such as Amazon and Walmart who have invested heavily in Indian companies.

Last year, the US-India Strategic Partnership Forum (USISPF) had also said that new ecommerce rules are regressive and could potentially harm online shopping customers, besides the companies themselves.