PhonePe Looks To Payswiff For Offline Expansion Of Its Merchants Base

PhonePe Looks To Payswiff For Offline Expansion Of Its Merchants Base 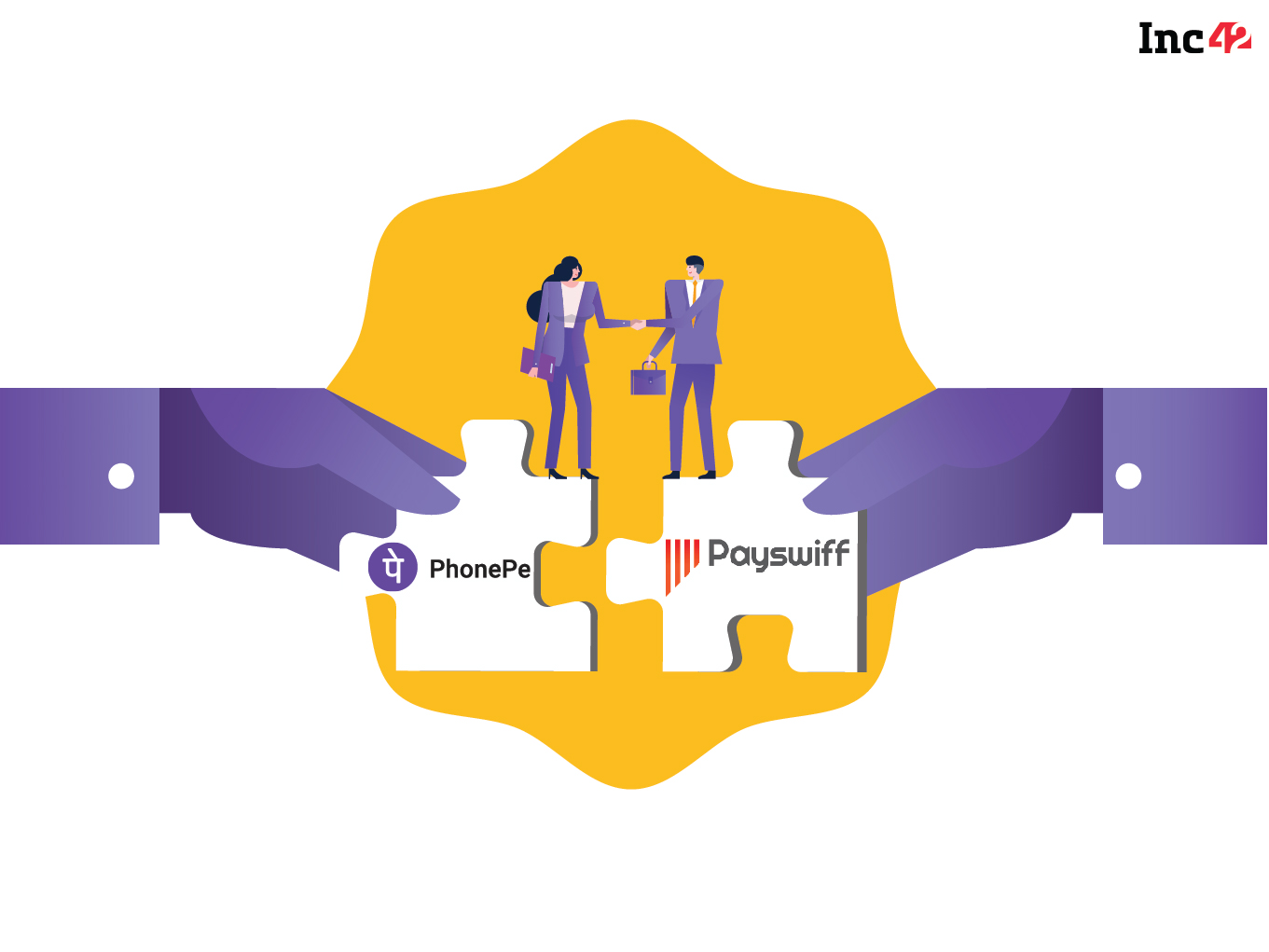 PhonePe and Paytm are two of the key homegrown players in the digital payments segment. While Paytm is now busy adding new verticals and expanding its base overseas, PhonePe is focussing on becoming a champion on its home turf. Continuing with its strategy to ‘collaborate and lead’ as a full stack payments container, PhonePe has signed a partnership, this time with the point of sale solution provider Payswiff with an aim to expand its offline merchant base.

PhonePe is currently accepted at over 3 Mn offline retail outlets and kirana stores as well as at over 100 top online merchants in India. As part of the association, PhonePe will be made available as a payment option on Payswiff’s POS/mPOS terminals across their merchant base.

The announcement came in soon after Google Pay collaborated with the point of sale solutions provider PineLabs.

The PhonePe-Payswiff deal is quite similar to the agreement signed by PhonePe with Naspers-backed payment technology company PayU in September 2018 with an aim to expand its online merchant base. Earlier, PhonePe has also signed strategic partnerships with FreeCharge, Cashfree, Walmart, Snapdeal, Mumbai Metro and more.

Recently, parent company Flipkart also gave an in-principal approval to PhonePe to set up as a separate entity. In order to strengthen its footprint in the market, the company also launched its own wealth management unit, PhonePe Wealth Services with an initial authorised capital of $7.12 Mn (INR 50 Cr) and paid up capital of $2.85 Mn (INR 20 Cr).

Synergy Between Payswiff And PhonePe

Founded in 2013 by Prabhu Ram, Priti Shah, Ravi Kiran, Anil Bharadwaj, Krishna Kishore and Maulik Shah, Payswiff (formerly Paynear Solutions) is an omnichannel payment processing and tax-compliance solutions provider. With over 1.5 Lakh devices deployed with merchants in the enterprise and SMB (Small and Medium Business) space, Payswiff has significant reach in the country with presence across over 1,320 locations.

It has also launched Payswiff SET which helps the merchants to start collecting paperless payments within 15 minutes and Android POS which allows merchants to accept payments, generate bills, invoices, track sales along with transactions on a daily, weekly and monthly manner.

Working with PhonePe will allow Payswiff merchants to offer a seamless payment experience to their consumers. Anil Bharadwaj, chief commercial officer, Payswiff said, “The partnership (with PhonePe) will empower our current and new merchants to embrace digital payment solutions and transform their businesses.”

In November 2017, PhonePe launched its Bluetooth-enabled PoS device and has been bullish on its offline expansion since then. It also has a merchant app to facilitate end-to-end control for merchants on the payment process, including transaction confirmation and reconciliation.

According to Yuvraj Singh Shekhawat, head of offline organised business at PhonePe, its offline payment solutions are fast and simple wherein shop owners/cashiers do not require extensive training for using their solutions.

Also, in line with Payswiff’s tax compliance solutions, PhonePe also launched its tax saving solution on its app in March 2019. “Payswiff is growing fast, building a notable reach in the offline merchant space and we are happy to associate with them. Together we can enable faster adoption of digital payments across the country,” added Shekhawat.

In FY19-20, Payswiff plans to process 12K Cr. of volumes and deploy 1.5 lakh devices. The company is also scheduling the release of new features such as Same day, instant settlements that address’ the working capital needs of the merchants and multilingual app in four languages by the end of April this year.

With integrated PhonePe payment option on its devices, it aims to give the merchants an option to collect digital payments from the same POS device. “This differentiates us from several other POS providers that are limited to card-based payments alone,” said Bharadwaj.

The company competes with players like Ezetap, Mswipe, Pine Labs, Innoviti, Mosambee, among others. However, Bharadwaj believes that the POS market is yet to be saturated and there is scope of growth for each player.

“As of today, we have close to 3.6 Mn PoS devices which are deployed in the Indian market. This comprises of only 5-6% of the market. Payment solution providers like us have to work hard to give the best possible service, as the merchants have a choice in choosing what’s best for them,” he added.

A detailed questionnaire sent to PhonePe did not elicit any response till the time of publication.

POS Space In India: Need For Expansion Pushes For Collaboration

The global real-time payments market size is estimated to reach $39.02 Bn by 2025. At the same time, according to a report by Google and Boston Consulting Group (BCG), the Indian digital payments industry is estimated to touch $500 Bn by 2020.

Since demonetisation in 2016, digital payments started to pick up the pace with the growth of ecommerce companies followed by the emergence of digital wallet companies. To expand their reach, the digital wallets started encouraging customers to use them for offline point of sale (POS) transactions too like at shopping malls, supermarkets, grocery stores, restaurants and gas/petrol stations.

As evident from the recent collaborations in the Indian POS and digital payments segment, these POS transactions are expected to become a majority contributor to the digital payments platform in the coming years.

However, the POS sector has its own share of challenges merchants are passing the transaction rates to the end consumers which should not be the ideal case. The government is doing a lot on transaction rates especially for Debit cards and UPI. The challenge lies with Credit cards. “If the Govt. can provide incentives or tax rebates for the amount of which they paid as transaction charges, that I believe should encourage merchants to incline towards digital transactions,” said Bharadwaj.