VSS’s Secretary accused of planning to extort INR 20 Cr ($2.71 Mn) has been working with Paytm since January 2010

“ We are standing by our colleagues,” said Paytm in a statement Sharma’s Secretary, Vice President Corporate Communications and Public Relations — Sonia Dhawan has been arrested on accusation of being the mastermind behind the same.

Her husband Rupak Jain and another Paytm employee Devendra Kumar have also been arrested in the matter.

A complaint was filed by Paytm founder stating that the company’s employees, a woman and her aides, had stolen some data from the company and were threatening to leak it. They were demanding INR 20 Crore in ransom. The FIR was filed and three people were arrested.

“They are being probed about the data and their modus operandi. Police will share the facts as they are unearthed,” Sharma added.

He further added that Kolkata resident Rohit Chomal, who is the fourth accused, had made the extortion call to Vijay Shekhar Sharma’s brother Ajay Shekhar Sharma. The police is currently trying to track Chomal down. 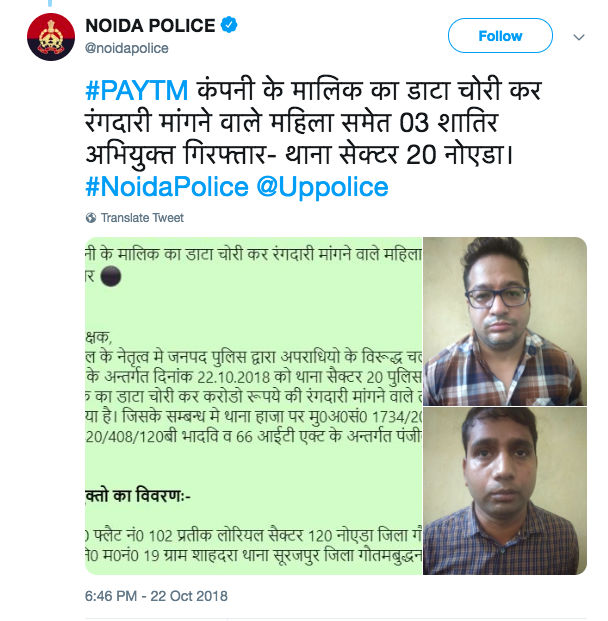 Paytm confirmed the development and, in a statement to Inc42, said, “Noida Police has arrested three people including one female employee of Paytm in case of extortion. The employee along with two other accomplices attempted to extort money from Vijay Shekhar Sharma on the pretext of leaking his personal data. We are standing by our colleagues till the police enquiry reaches its meaningful conclusion.”

The police, who are currently unclear about the nature of the data that has been stolen, will seek their custody to interrogate them further.

This is not the first time that a matter related to Paytm’s employees being accused of data theft from the company has come to light. Earlier this year, a former Paytm employee and five others were arrested on the charges under Indian Penal Code sections related to criminal conspiracy, cheating and IT Act violation. According to the filed charge sheet, they were accused of cheating the company by using Paytm’s employee id and default password generation system.