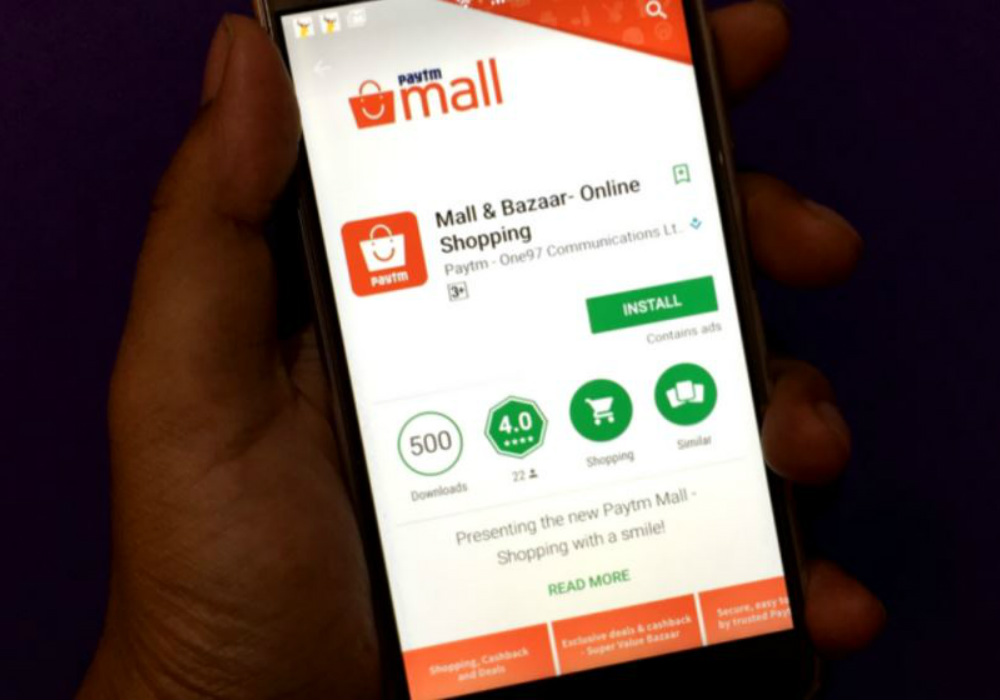 The move is in line with the company’s vision to combine online with offline, in order to offer consumers a flexible and efficient shopping experience.

For the launch, Paytm Mall has partnered with fashion and lifestyle brand Red Tape and is set to expand its reach to more than 50 Red Tape stores across the country by the end of 2018. The aim, according to the official statement, is to clock business worth $78 Mn (INR 500 Cr) by year-end.

Commenting on the development, Amit Sinha, COO of Paytm Mall said, “We are excited to announce the launch of a new model of retail which combines the best of online and offline experiences seamlessly. We want to provide a best in class in-store experience wherein users can browse the entire catalogue available from a brand and be able to pick up products from the shop or get them delivered to their doorstep on the same day.”

“We will also offer this technology to traditional retailers to help them transform into the digital age. We are confident this will prove beneficial for brands as it combines offline stores, warehouse and fulfillment hubs into a single place thereby enabling them to offer an enhanced experience to shoppers,” Sinha added.

Through the latest initiative, Paytm Mall aims to maximise partnered brands’ reach and increase the overall efficiency of the retail ecosystem by combining three places: stores, warehouse and fulfillment hub into one place.

This, as stated by Amit Sinha, will ensure that brand authorised retailers don’t have to block a lot of capital in inventory.

Speaking on the newly-forged partnership with Paytm Mall, Shuja Mirza, President of Red Tape said, “We are excited to launch Red Tape online outlet stores and partner with Paytm Mall which brings in meaningful innovations that help us offer a first-of-its-kind consumer experience. This partnership will boost our reach and help create greater synchronisation between our online store on Paytm Mall and our retail outlet.”

According to the company spokesperson, Paytm Mall is also looking to team up with other retail brands, in an attempt to bring technology and convenience to brick and mortar stores across the country.

What Has Paytm Mall Been Up To?

Launched in February 2017, Paytm Mall is a consumer shopping marketplace that is modelled after China’s largest business-to-consumer (B2C) retail platform, TMall. A newer version of its three-year-old ecommerce business, Paytm Mall offers a combination of the mall and bazaar concepts to Indian consumers. It is owned by Paytm Ecommerce Pvt. Ltd.

At the time of its launch, the ecommerce platform boasted over 140K sellers and several million products across diverse categories like fashion, electronics, home furnishings and consumer durables. The app is available in more than seven regional languages.

After separating its digital payments and ecommerce businesses, Paytm had transferred about 800 staff to Paytm Mall and since then has been hiring across key positions in the company with an overall target of hiring 2,000 people.

After raising $200 Mn from Alibaba and SAIF Partners in March last year, Paytm Mall was reportedly in talks to acquire a majority stake in online grocery startup BigBasket for $200 Mn in July.

The changes to its seller onboarding process were aimed at facilitating partnership with reputed shopkeepers and brands. According to reports, the company is looking to scale its partner network by adding 3,000 agents to its existing workforce.

Around the same time, it was reported that Paytm Mall was looking to pour $35 Mn into its logistics network, in a bid to bolster the core technology and infrastructure of the ecommerce platform.

In December last year, founder Vijay Shekhar Sharma announced that Paytm was planning to invest up to $2.5 Bn to grow its online shopping portal business within the next three to five years.

Sharma added that the process of fundraising would start in January to March quarter of 2018. He also revealed that the company has already seen investor interest coming from various geographies.

“As an ecommerce business, we started six months ago and we are nearly half of the large companies. It has grown so fabulously well that we believe that we have a real good shot in the longer horizon, in three to five years, of (reaching) the top spot,” he said at the time.

In the same month, Sharma pledged about 5% of his personal holding in Paytm Mall for an ESOP pool. This move reportedly added about $50 Mn worth of stocks to the ESOP corpus.

Most recently, reports surfaced that Paytm Mall might integrate with its major investor Alibaba’s latest investments, BigBasket and XpressBees. As per sources, in the next three to four months, Paytm Mall will make available a BigBasket online store on its web as well as mobile application.

With rivals Amazon and Flipkart adopting an omnichannel strategy to chart a strong presence in the offline space, Paytm Mall is now looking to bolster its offline retail partner network by teaming up with companies like Red Tape.