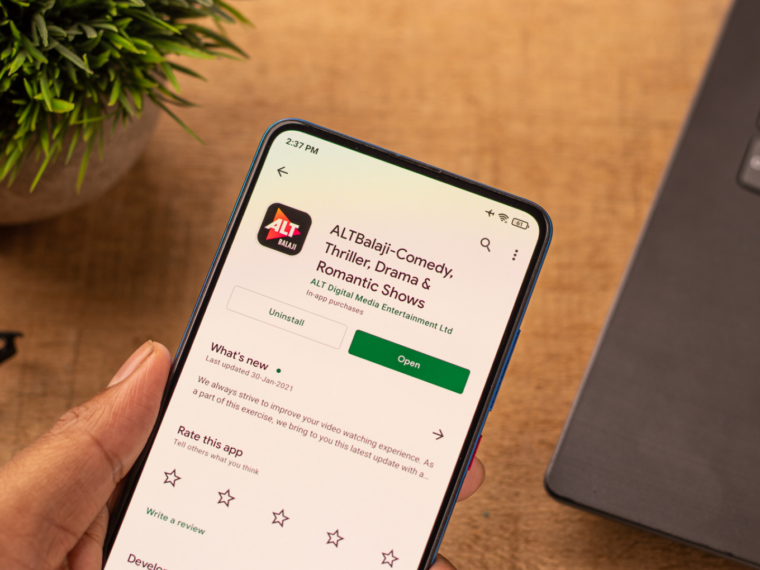 The company is focussing on reducing cash burn, which reduced to INR 81 Cr in FY22 from INR 122 Cr in FY21

Even as Indians started warming up to the idea of on demand entertainment, the pandemic accelerated the growth of over-the-top (OTT) platforms. However, the OTT viewership seems to be slowing down as screen fatigue sets in and consumers start going back to pre-pandemic normal life. 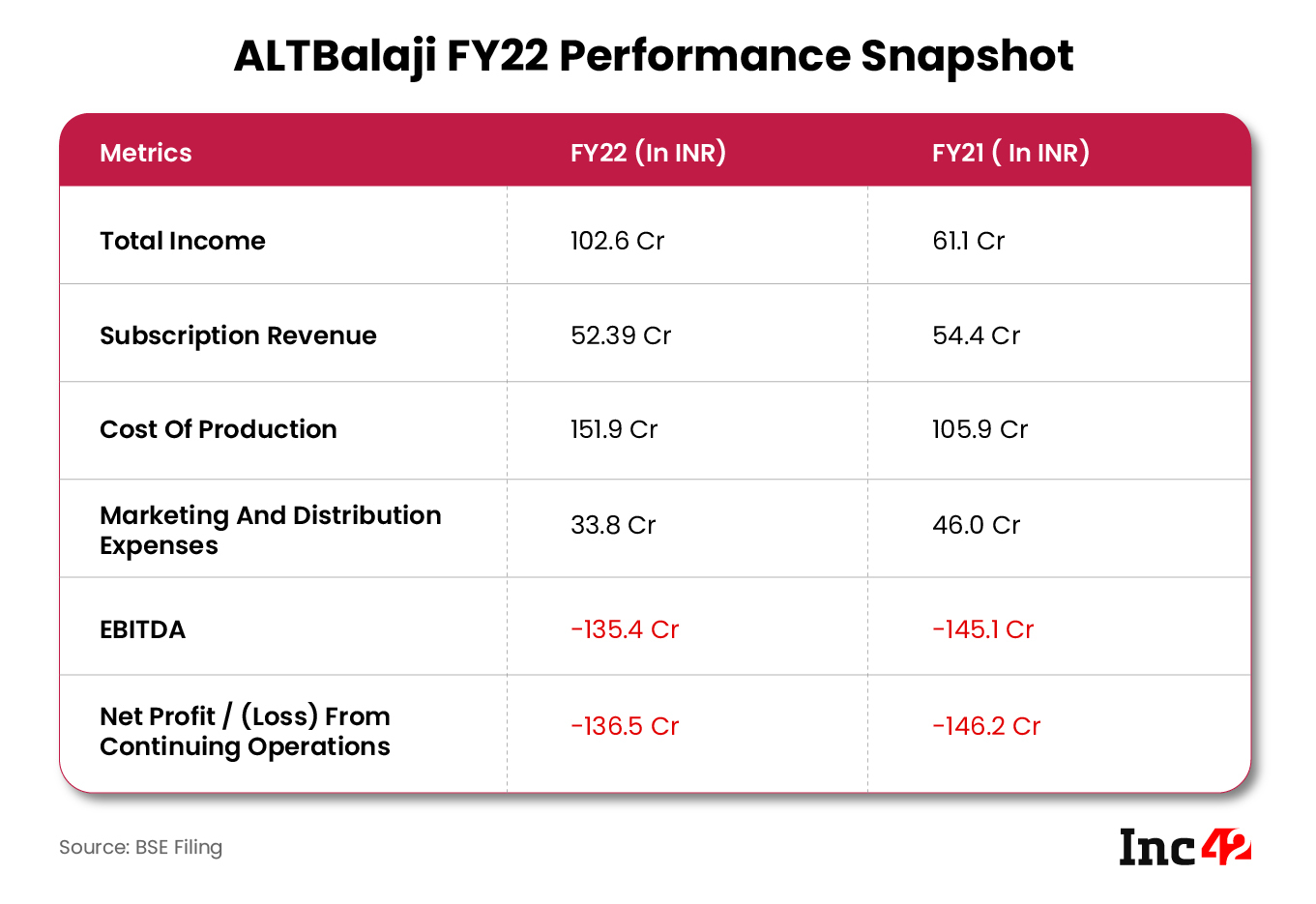 Despite a dip in subscriber base, ALTBalaji posted a 67% year-on-year jump in overall revenue to INR 102 Cr for FY22. However, the additional 23.73 cr of revenue for FY22 will be accounted for in the next four quarters as deferred revenue, the parent company stated in an exchange filing.

It said ALTBalaji is focussing on reducing cash burn. Cash burn in FY22 stood at INR 81 Cr as against INR 122 Cr in FY21. The company said it is also looking at minimising  consumer churn.

“We continue to have strong controls on the cash spend while driving overall profitability including some strong strategic content sharing deals which allows us to further our growth,” Shobha Kapoor, managing director of Balaji Telefilms Limited, said.

The OTT platform, which targets the mass Hindi-speaking audience, has not revised its price to keep the service affordable. The yearly subscription price remains at INR 300.

In FY22, it added 13 new shows to its overall library which consists of over 90 shows. It also launched a reality show Lock Upp going beyond its usual content strategy of fictional shows. The reality show crossed 500+ million views, the company claimed. 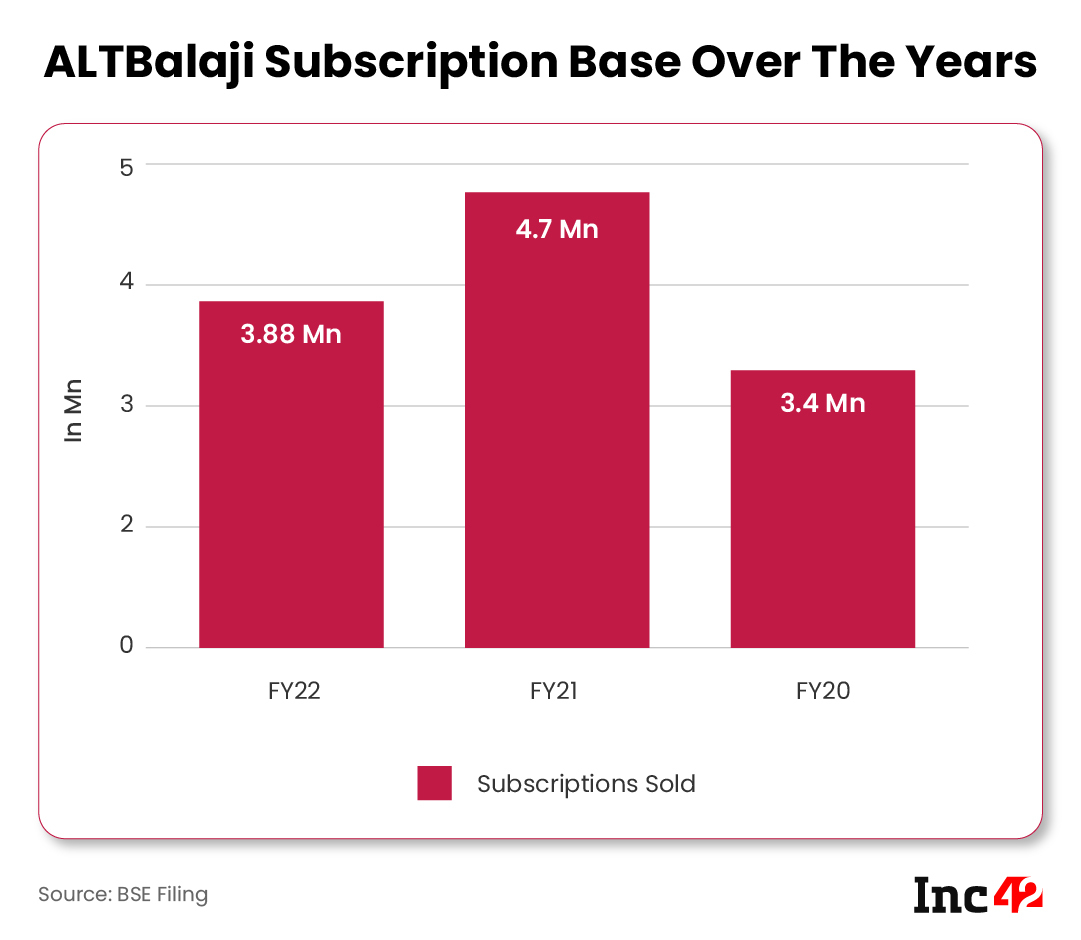 ALTBalaji is competing in a market which is set to grow at 21% annually to be valued at about $2 Bn by 2024, Minister of Information and Broadcasting Minister Anurag Thakur said recently. The Indian market is also expected to add 30 Cr more OTT users, Thakur added.

The platform is not only competing against homegrown players such as, MX Player, SonyLiv, Disney+ Hotstar, Zee5, among others, but is also seeing stiff competition from international players such as Amazon Prime Video, Netflix, Disney+Hotstar.

The market is currently led by Disney+ Hotstar with a 29% share, followed by OTT aggregator Jio TV and Amazon Prime Video, according to a report by Statista. However, Netflix is struggling to grab a sizable share in India despite high investment.