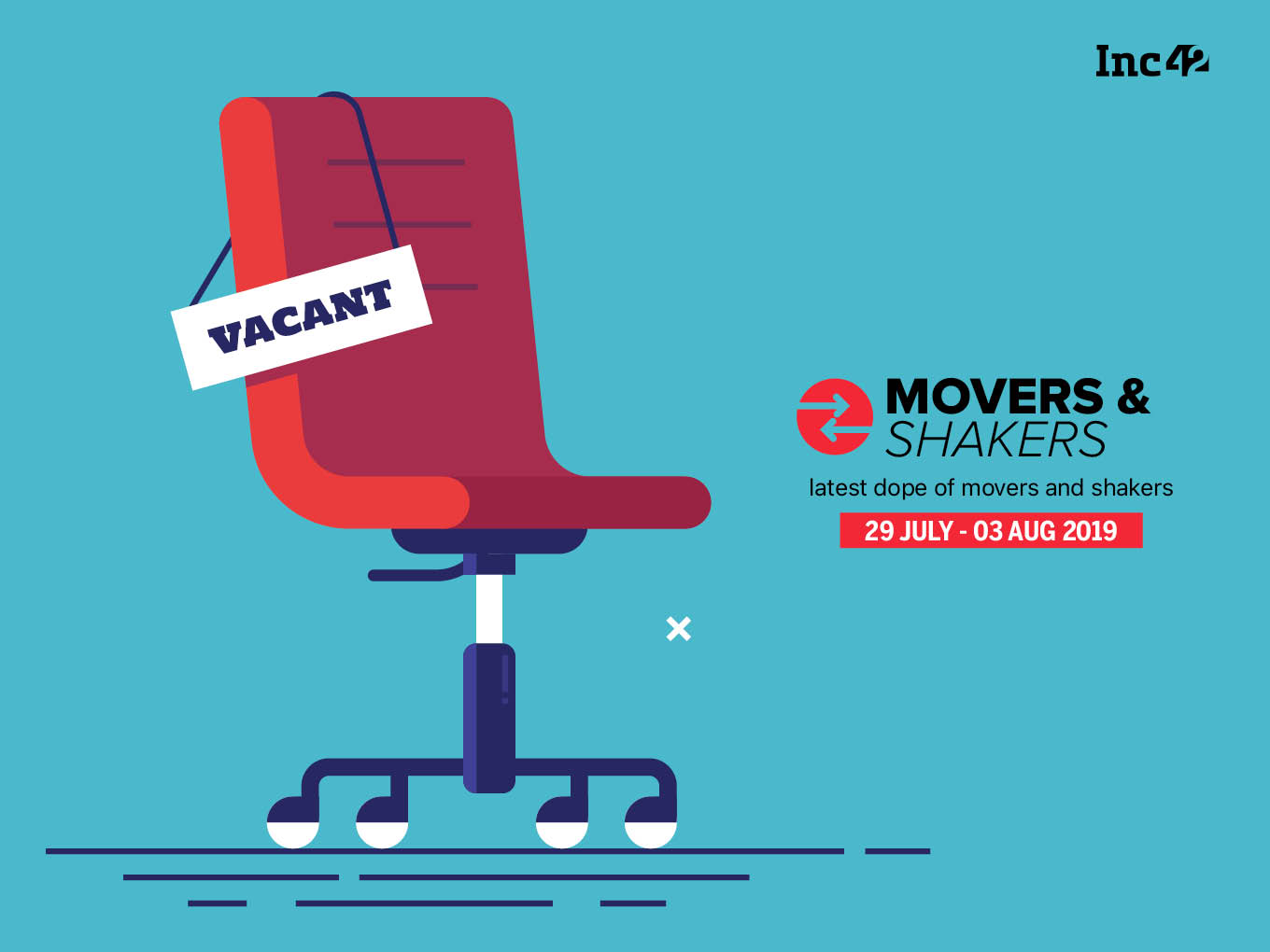 This week had  significant developments in terms of jobs and entrepreneurs of the ecosystem. On a sad note, Café Coffee Day founder V G Siddhartha was found dead on the banks of Netravati River, early morning on July 31, after being missing for over two days. Karnataka police have been searching for Siddhartha since yesterday, following his sudden disappearance on Monday night.

Startup founders also expressed grief on his sudden demise. Sachin Bansal cofounder of Flipkart and BAC Acquisitions said in a tweet, He has been an inspiring entrepreneur and investor.”

On another note, BYJU’s founder and CEO Byju Raveendran has now entered the billionaires’ club. A Bloomberg report said that Raveendran holds a 21% stake in the company and has, on paper, become a billionaire. In BYJU’S latest funding round, Raveendran bought shares to maintain his equity level. Therefore, along with his wife and brother, the Raveendran and family now hold a total stake of about 35%.

However, on the global level, a LinkedIn bug created job openings for chief executive positions in Google and LinkedIn. Last week, Michel Rijnders, an online recruiter from the Netherlands, discovered a security loophole that allowed users to post job openings on the company’s official LinkedIn page, even with no link or association, and certainly with no permission needed. On another front, a LinkedIn spokesperson reportedly said that it was a bug in the online jobs experience and issue has been resolved.

Further, in another reshuffle, Ola has now advanced its electric mobility ambitions with a redirection of its teams which mainly manage Foodpanda and Ola Play. They said that some of the mid to senior level managers, executives, vice-presidents and engineers have been shifted to the Ola Electric team over the last few weeks.

One of the moves to Ola Electric include Ankit Jain, who was vice-president and head of Ola Play. He has now been appointed cofounder of Ola Electric Mobility.

Bhat comes with close to two decades of global experience in product strategy, management and business consulting encompassing domains such as retail, ecommerce and financial services. Prior to this, he was the Chief Product Officer at Lendingkart. Bhat has also stewarded product development teams at Myntra, ABOF and Oracle. In his previous organisations, he has been instrumental in launching innovative ideas such as shoppable fashion stories etc.

In his new leadership role at capillary, Bhat will be at the helm of affairs for an ever-increasing product portfolio – AI powered Consumer Engagement, ecommerce and Consumer Data Platform. He will work closely with global customers and the product teams to deepen the focus on consumer engagement and ecommerce products, scale up the AI powered InStore product and also launch a slew of new products in consumer data space.

Bengaluru-based home interior design startup Homelane has appointed Balaji Chandran as the company’s Chief Product Officer (CPO), reporting to Srikanth Iyer, cofounder and CEO, HomeLane. He will be based at HomeLane’s head office in Bengaluru.

In over two decades of experience, he was last working with Flipkart, he was the Head of Product for user engagement. His expertise extends from startups to IT Services and Consulting as well as Business Product Management. He has also worked with Microsoft, eBay, Amazon and Yahoo.

In his new role, Chandran will spearhead HomeLane’s product strategy formation as well as execution. His focus will be to drive a scalable product portfolio that will in turn result in business profitability and improved consumer engagement. He will be responsible for product design, innovation, development and management.

Mumbai-based Indian Federation of Sports Gaming (IFSG) announced the appointment of Justice A K Sikri as its Ombudsman and Ethics Officer. Arjan Kumar Sikri is a former judge of the Supreme Court of India and was recently appointed as a judge in the Singapore International Commercial Court.

In a career of over four decades, Justice Sikri has held several eminent positions. He retired as a senior most judge of the Supreme Court of India in March 2019. He has also served as the Justice of the Punjab and Haryana High Court and Acting Justice of the High Court of Delhi.

At IFSG, Sikri will be responsible for investigating queries/complaints raised by the users of the Online Fantasy Sports Gaming platforms. In this role, he will provide strategic council, resolve disputes brought forward regarding binding rules or financial discrepancies as well as steer hearings and make announcements for smooth operation and ease of functioning.

Spruill replaces Mark Templeton, who announced his decision in May 2019 to step down due to personal reasons and has been working closely with the company’s board to identify a successor. DigitalOcean also appointed Bill Sorenson as its new Chief Financial Officer, who will help scale the company’s global finance organization.

Over the last 15 years, Spruill has held various senior leadership roles at technology companies. He brings a wealth of technical, financial and leadership experience to DigitalOcean. He began his career as an engineer and spent several years as an investment banker focused on mergers and acquisitions.