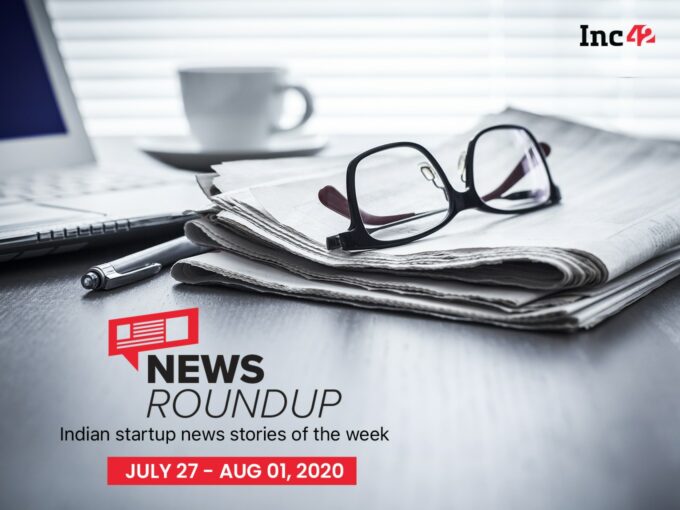 The highlight of the week was Reliance’s digital venture Jio Platforms reporting an INR 2,520 Cr net profit in the first quarter of fiscal year 2021, which ended on June 30, noting a 182.8% hike from INR 891 Cr recorded in Q1 FY2020. This after the company had raised around $20 Bn in a strategic stakes sale in Jio Platforms over the last three months, attracting global tech giants such as Facebook and Google for massive investments in the company’s digital offerings. Reliance’s Jio Platforms value of services also increased at the same rate from INR 14,593 Cr to INR 19,513 Cr last quarter.

Meanwhile, the spree of investments into Reliance’s various subsidiaries may not be over. According to reports, Qatar’s sovereign wealth fund, the Qatar Investment Authority may invest $1.5 Bn in the company’s Infrastructure investment trust (InvIT), which holds its fiber-optic assets. The proposed investment by Qatar would monetise the fiber assets held by Jio Digital Fiber Pvt. Ltd.

Last week, Jio also made news for the launch of the mobile application of its grocery delivery platform, JioMart. Reliance chairman Mukesh Ambani is also reported to be planning JioMart’s partnership with messaging application WhatsApp to bring the smaller kirana stores into India’s ecommerce supply chain. Perhaps taking a cue from the way WhatsApp’s use cases are being utilised by Jio, Facebook CEO Mark Zuckerberg, during the company’s second-quarter earnings call, said that India has a huge opportunity to enable small businesses and individuals to buy and sell things through Whatsapp. Zuckerberg said that this opportunity has been created due to the country’s population and WhatApp user base. India is the largest market for WhatsApp with more than 400 Mn users. Interestingly, it makes up for 80% of the Indian internet users of 500 Mn.

Indian foodtech unicorn Swiggy has laid off 350 executives in what called a ‘final realignment exercise’ necessitated by the financial disruption caused due to the Covid-19 pandemic. The layoffs come two months after the company laid off 1100 employees across departments. During the months of the lockdown, the company tried to diversify its revenue streams while its core business of food delivery witnessed a slump in demand. The company offered its fleet of drivers and vehicles to ecommerce stores for last-mile connectivity and logistics support. The company also scaled up its grocery delivery platform and Swiggy Genie, which allows customers to order items from the nearby retail stores on the Swiggy portal, and to even send or receive packages across the city.

“In May, we began the exercise of realigning resources to create capacity in higher potential areas with the optimism of the business attaining pre-Covid levels in the near-term. However, with the industry still only having recovered to about 50% of its peak, we have to, unfortunately, go ahead with this final realignment exercise, which will result in the net loss of 350 jobs. We are concluding the exercise we began late May and there are no plans for any further restructuring,” a Swiggy spokesperson told Inc42.

Ecommerce giant Flipkart has begun offering hyperlocal services in Bengaluru, taking on Google-backed Dunzo, which is the biggest player in the segment in India. Flipkart will be utilising its extensive supply chain infrastructure to deliver more than 2000 products across categories grocery, fresh, dairy, meat, mobiles, electronics accessories, stationery items and home accessories, in the first phase of the launch in Bengaluru. It will also be onboarding neighbourhood or kirana stores onto its network. The service is currently available in Bengaluru but will expand to six undisclosed cities in the coming six months. The use of advanced technologies for location mapping, a delivery time of 6 am to midnight, and enabling customers to pick a 2-hour slot for the delivery of their products are some of the features offered as part of Flipkart Quick Services.

The National Payments Corporation of India (NPCI) has asked the government to bring back the Merchant Discount Rate (MDR), a fee previously levied on digital transactions. MDR was a fee collected by banks and levied by merchants processing the transactions. The amount was shared among acquiring bank, fintech partner and issuing bank, with 10% of the amount paid as switching fees to NPCI. While the fee was waived off last year on the UPI network and for payments made through the RuPay debit card modes to encourage adoption of digital payments among small businesses, a recent Inc42 analysis revealed how payments processors such as Google Pay and Phone Pe were incurring losses on digital transactions.

The push by NPCI for bringing back the MDR comes amid growing concerns that the losses incurred by banks and merchants due to the absence of MDR would slow down the deployment of digital infrastructure needed for the growth of digital payments. It remains to be seen if bringing back MDR for digital payments could curb losses for UPI payment processors.

In another measure which could hamper the growth of the various players in India’s digital payments sector, the NPCI this week, put a cap on UPI transactions for payments processors, asking all payment apps to limit the transactions on their platform before they exceed 50% of all UPI transactions in the country, failing which, they would have to face penalties. The NPCI has decided to put a cap on UPI transactions to limit the damage to the payment ecosystem in India in case the system collapses. Though the transaction limit will hamper the growth of the players operating in the segment, it will ensure that there is no major impact on the Indian payments ecosystem in case UPI collapses.

Indian digital payments soonicorn MobiKwik has launched its UPI-powered payment link service, MPay.me, to allow users to create their personal payment link and receive payments regardless of the app being used to make the payment. The new service will function as a single integrated payment platform for making and receiving payments through any UPI payments processor such as Google Pay, PhonePe, Paytm or MobiKwik. The company has noted that the feature would seamlessly work on desktop and mobile phones.

MobiKwik lags behind Google Pay, Phone Pe and Paytm in the digital payments sector, but could gain a few yards with its latest offering. According to a recently published Mint report, Google Pay makes up for nearly 42% of all UPI transactions, followed by Flipkart-owned PhonePe with 35% transactions. With Amazon and WhatsApp also set to launch their UPI-powered digital payments apps, the digital payments segment will have a lot of players vying for a share of the Indian market, which accounted for 1.34 Bn transactions worth INR 2,61,835 Cr on the UPI network in June 2020.

While Flipkart’s ‘reverse acquisition’ of its parent company Walmart’s B2B wholesale business ‘Best Price’ may have inspired various memes on social media, the All Indian Online Vendors Association (AIOVA) is not laughing. The association, representing the interests of more than 2000 sellers, has approached the Competition Commission of India (CCI) and said that the Flipkart-Walmart acquisition is not tenable, given the fact that a CCI inquiry against Flipkart for abuse of dominant position is currently underway.

Earlier this year, the National Company Law Appellate Tribunal (NCLAT) initiated an investigation against Flipkart, as it was alleged that the ecommerce giant was selling goods through its B2B channel to a web of preferential sellers like WS Retail and Tech-Connect Retail, among others, at massive discounts.

The newly ratified Consumer Protection Act (CPA) 2019, which came into effect earlier this month, is understood to be applying to a whole range of companies which offer online services. This is because according to the ecommerce rules in the Act, ecommerce is defined as “buying or selling of goods or services including digital products over digital or electronic networks.” The broad definition means companies providing ride-hailing, food delivery and online ticketing services, among others, are defined as ecommerce entities under the terms of the act.

Hence, companies such as MakeMyTrip, OYO, and online ticketing services offered by airlines such as Indigo and Vistara, among others, would need to establish an adequate grievance redressal mechanism. The rules mandate that etailers set up a grievance redressal officer, acknowledge the receipt of a complaint within 48 hours and resolve the complaint within one month of the complaint being filed by the customer.

The global ecommerce giant has for long been accused of using sales data for third party sellers retailing products on its platform to develop its own competing products. While the company had previously denied these allegations, the company’s CEO Jeff Bezos, on July 29, told the US Congress that he cannot guarantee that the company isn’t accessing third-party seller data to develop its own competing products. A seller listed on the platform told Economic Times that if they are not spending at least INR 20K per month on Amazon services, sales just don’t pick up, and even after that investment, you compete with Amazon’s own products on price.

This week, Amazon also made news for going all out in preparations for its annual Prime Day sale to be held on August 6-7 this year, but this time it has more pressure to make up for the lost sales due the pandemic. And in luring customers through ‘exclusive’ deals, the company may be indulging in unethical practices, even flouting India’s FDI norms.

Chinese smartphone brand OnePlus is all set to launch its mid-range phones for the Indian market. Puzzlingly though, the company has asked all its etailers and offline sellers to hold off on selling its new products. These products will only be available on Amazon, and not even on OnePlus’ official website. Even All India Mobile Retailers’ Association (AIMRA) and Organised Retailers Association have written to the company condemning this move.

According to internal company documents accessed by The Information, Google may have been discretely collecting data of users and the way they interact with non-Google apps on Android smartphones, to push its own competing applications. The report mentions that the project, called ‘Android Lockbox’ within the company, allows the company’s employees to access data about the frequency with which a non-Google app is used, and the locations of such apps’ users. While the data collected by Google is anonymised and doesn’t pose any serious risk to data privacy, the point of contention lies in the fact that using such data to push its own competing applications is anti-competitive behaviour on the part of Google. According to the report, the data collected through Android Lockbox was used by the company to fast-track the development of YouTube’s alternative to TikTok, a short video sharing feature called ‘Shorts’, after TikTok was banned in India last month.

And how does the Android user give his consent for his data to be collected by Google for lockbox? It happens during the setting up process for a new Android smartphone. According to the report, the Lockbox program takes effect once users are setting up Google services on their Android devices. Google tells users that opting in will give them more personalised experiences, including faster searches. But this data also feeds the Lockbox program that has been used for competitive research, according to internal documents accessed by The Information. The Lockbox program has been around since 2013.

Earlier this month, Twitter accounts of high-profile celebrities, businessmen and politicians hacked to peddle a cryptocurrency scam. The investigation has now revealed that Twitter found that the massive hack was the result of a spear-phishing attack. It added that the hack “significantly limited” access to its internal tools.

The microblogging platform explained that hackers had access to one of the employees’ credentials and used it to target others as well to gain access to its internal support tools.