This Funky New Hike HQ Will Certainly Hike Up Your Spirits

This Funky New Hike HQ Will Certainly Hike Up Your Spirits 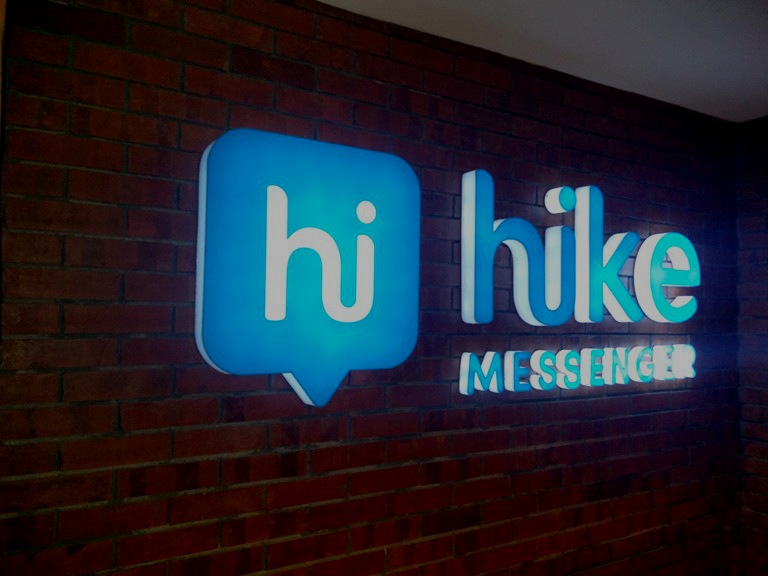 Working in a noisy and crowded office can be really distracting and annoying; thereby hampering your productivity. With a userbase of over 100 mn, India’s only homegrown messaging app, Hike, certainly cannot afford to have disturbed and unproductive employees. Its previous office – located in Signature Tower Gurgaon – was about 10,000 Sqft spreading across two floors. But it was not enough. Kavin Bharti Mittal – the 27-year-old founder and CEO of Hike – could sense the lack of space affecting his employees. He, therefore, decided to build a new headquarters for Hike; and this time it’s spread over a gross leasable area of 59,584 sqft, with a carpet area of over 35,000 square feet. 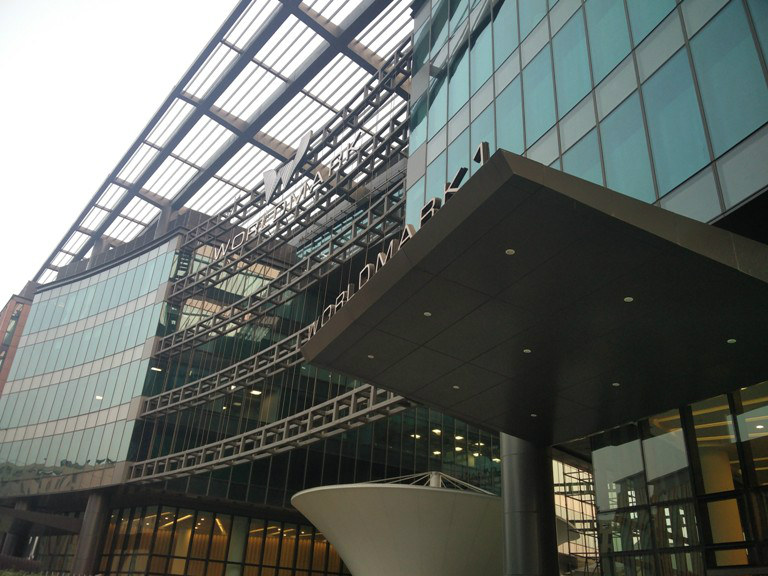 Entering the Worldmark 1 building in Aerocity, New Delhi – where the Hike HQ is located – was like entering a fortress. Upon entering the building, which is still under construction, the security guards; apart from asking me the usual question, asked for my identity card. Taking pictures of the building was also prohibited; however, I managed to click a few. I took the elevator to the fourth floor and arrived at the welcoming reception of Hike’s new HQ.

On entering my details in the tablet at the reception desk, my Envoy Passport was automatically generated and mailed to me. Envoy is a San Francisco-based startup that offers iPad-based sign-in software that helps in registration and checking-in process for office visitors. Before the novelty of the situation could sink in, I was guided into the swanky new office, where a host of other novelties were awaiting my senses. 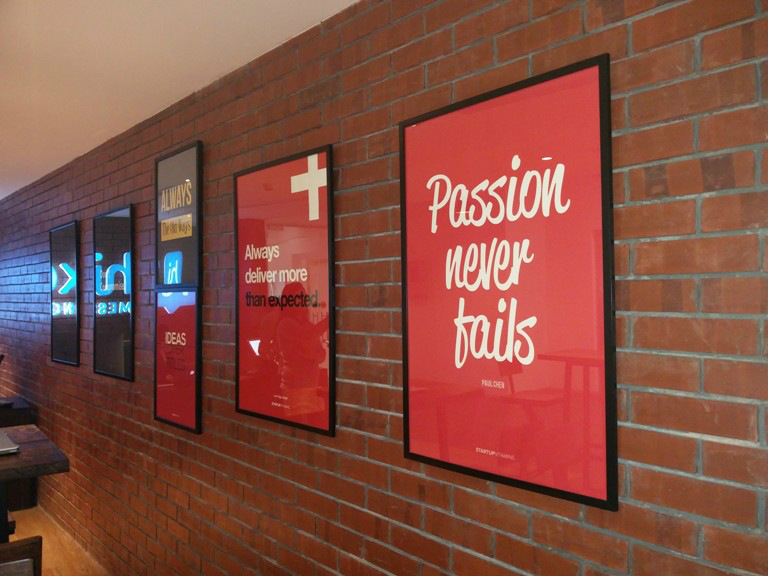 “When we set out on this project, the goal was to break away from what we know to be an office today. We really wanted to build an environment that would inspire people to do the best work of their lives every day,” said Kavin.

He explained that the office was conceptualised as a ‘Temple of Excellence’ and based on the 11 Hike Code – the operating principles of Hike. It was designed by Kavin and three of his colleagues – Sunil Mahala, Deepak Jose and Dhananjay Garg. The office was ready in September last year – within 6-7 months after the space was discovered – but the team moved in December because of the regulatory delays. 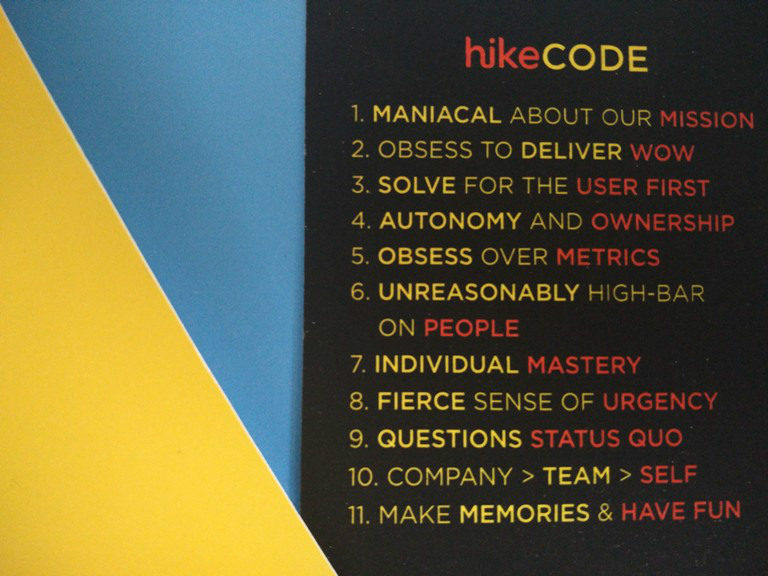 The office offers seating for about 400 people. There are no cubicles and no designated offices. Everyone, including the leadership team, sits in open space organised by sections such that small cross functional teams of 8-10 people sit together.

However, the most impressive feature of this office is the special areas and rooms it has all across. There are areas like the Garden, which is covered with grass-like flooring and immensely comfortable hammocks overlooking the beautiful expanse of Aerocity. The picket or fence, bordering the garden area, was specially designed and built by the Hike team. “We have very specifically chosen each piece of furniture for each section of our office,” says Kavin.

He says, “We wanted to build some spaces in the office that were away from the office.” Therefore, there are various specially designed rooms based on specific themes that allow employees to take a break from their stations and focus on their work in these rooms.

There are gaming-centric rooms with funky names like 8-Bit (from Mario), Teen Patti and AK-47 (Poker), but the ones that struck me the most were the rooms inspired by Shire of Lord Of The Rings – namely Hobbiton, Shire and Bag End. The round Shire door beckons you to enter the Shire room and the map of The Lonely Mountains painted on the walls of Hobbiton will give you the motivation to fight even the mighty Smaug.

Then there is the meditation room with soundproof walls and signal jammers that offers a peaceful environment to meditate.

For people who work late and prefer to stay back, there is a cosy nap room with bunk beds and sleeping bags. They can wake up next morning, workout in the fully-equipped gym, hit the showers and be fresh and ready for another day’s work.

The 24/7 cafeteria has the vibe of a European café and a sports bar; with a table tennis table, Xbox and even a Pool table. There’s even a huge screen in the cafeteria, where the townhalls happen.

Kavin seriously believes that sitting is the new smoking; therefore, there are many standing areas where people can work, hang out or even have a watercooler moment. But for people who love sitting, there are these incredibly conformable chairs placed all across the office.

There are also these bright, solid coloured lounges that can be found at core areas, for those who want to simply slip away to take a call or those who want to simply put their feet up or have a more casual work meeting. Writeable walls and dual lighting, dim and ambient, further allow employees to personalize the setting depending on their moods.

The office is not just beautiful, it’s efficient too. Storm water management, on-site waste-water segregation and reduced water consumption add to the sustainability quotient of this workplace. On the technology side, the office has a telepresence robot – that facilitates long-distance meetings – and Estimote smart beacons that can track people in the sprawling office.

“The new workplace is a strong reflection of our culture today, but more importantly, what we aspire it to be. It truly is the new benchmark on how everything should be done at Hike; beautiful yet simple and more importantly, it just works,” Kavin sums up.

I reached Hike’s office at 4 in the evening and the tour started around 4:30. On completion of the tour, it was already 6. I didn’t have the faintest of idea that the tour was so long – time just flew by. That itself speaks volumes about how much I enjoyed this quirky new HQ of Hike.