It’s been a week that all Indian tech stocks would like to forget. With crashes all around, tech stocks have caused headaches for investors, as many are losing their patience.

So what explains the nosediving of stocks in India and global stock exchanges? We’ll take a look but here are the other top stories of the week gone by:

A sharp drop in the technology-focused Nasdaq index has resulted in panic among technology investors around the world. The decline in the US has had a ripple effect across the globe.

In the past week, the Nasdaq index, which is considered a benchmark for the tech industry, has fallen by nearly 7%. Stock markets have been under pressure since the beginning of 2022 as central banks such as the US Federal Reserve are expected to raise interest rates to contain inflationary pressures.

The decline is expected to affect liquidity and already there has been a trend of profit-booking or sell-offs in the tech sector. 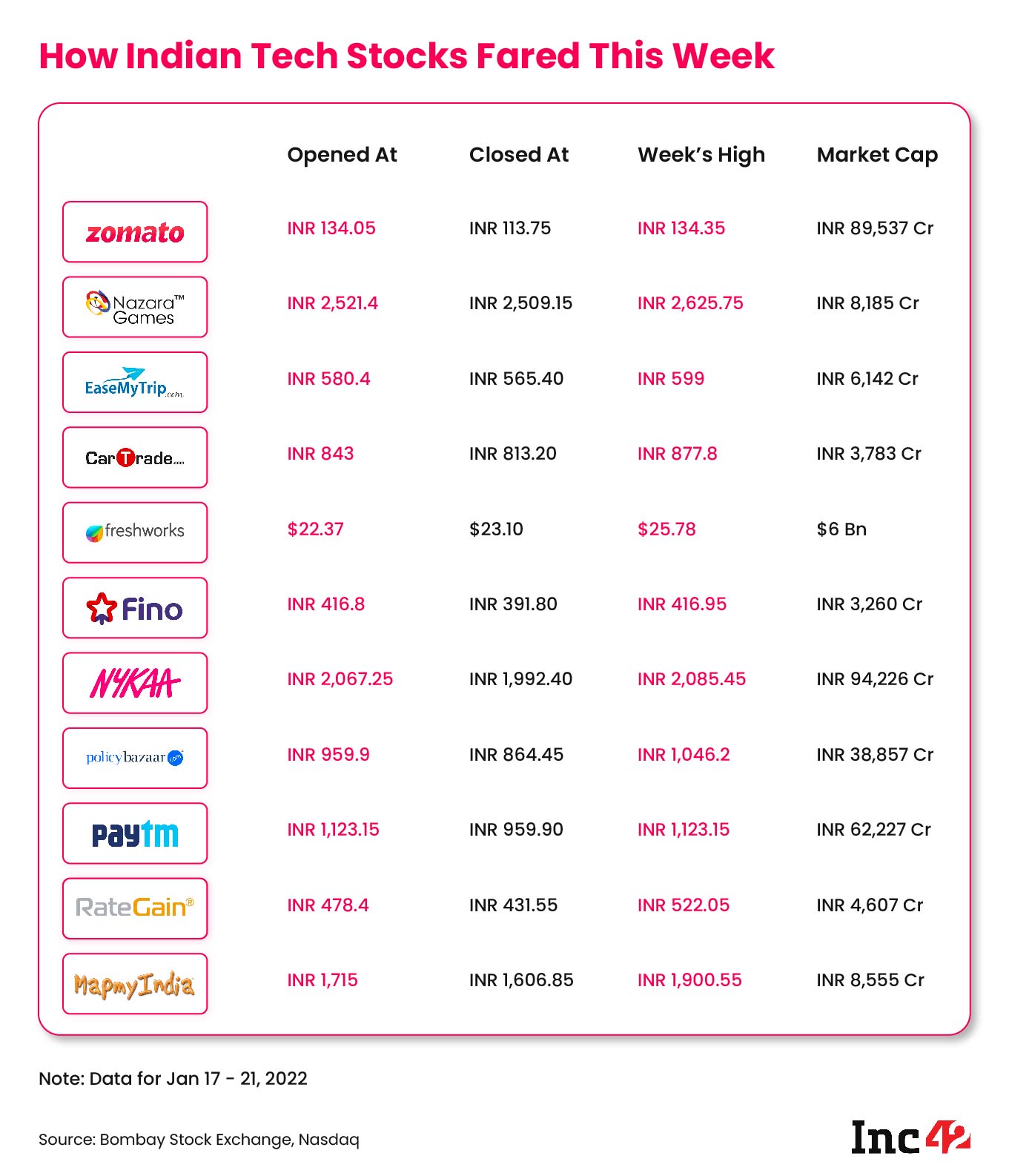 Meltdown For Indian Tech Stocks: Tech stocks across sectors saw a dip in the past week in India too. Policybazaar, Zomato, Paytm, Nykaa, RateGain, MapmyIndia have all seen drops over the last five trading sessions.

Zomato and Paytm in particular have been on a downward spiral. The food delivery giant, went below its listing price of INR 115 and its market cap slipped below INR 1 Lakh Cr to under INR 90,000 Cr.

What Explains The Nosedive? SoftBank and Sequoia India, two of the biggest startup investors in India, both expect a drop in private valuations amid a major correction in the US public markets.

Sequoia India and Southeast Asia MD Shailendra Singh also spoke publicly about market sentiments changing and expects a correction in startup funding. Coming from an investor such as Sequoia, this can be considered a warning sign for startups with regard to slowdown in funding. 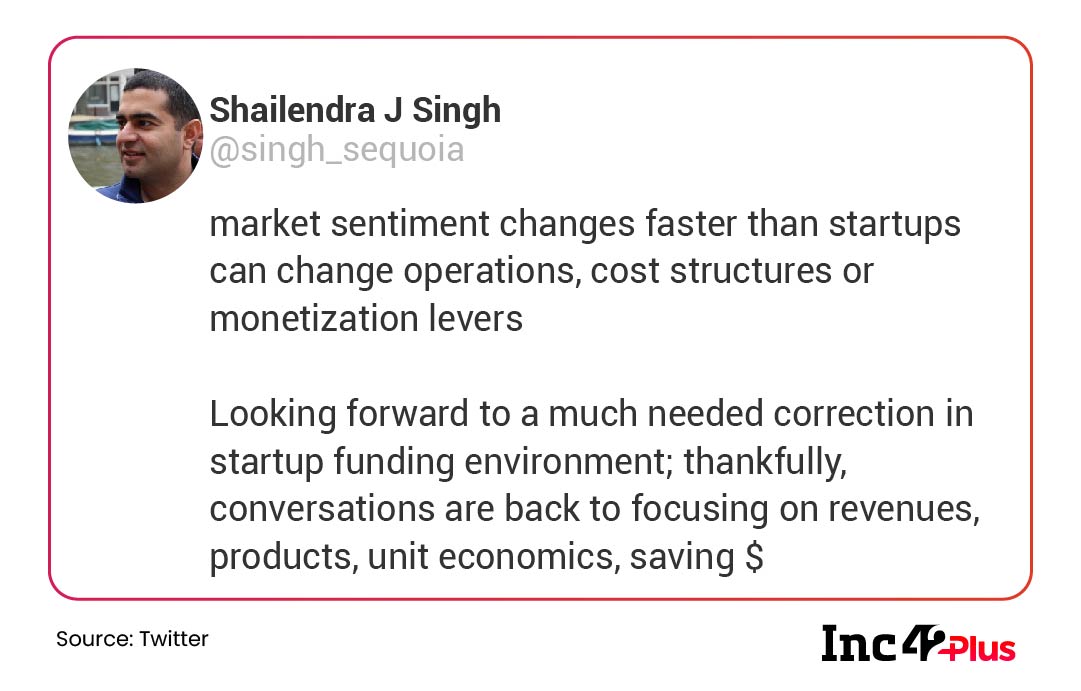 Tech stocks had become one of the most attractive investment opportunities in 2021 as government and corporate bond yields were at record-low levels. With bond yields rising, companies with lack of profitability are being assigned lower valuations.

Warning For Tech IPOs:  Aarin Capital Partners chairman and former Infosys CFO Mohandas Pai told Inc42 that the fall in stock prices will lead to more reasonable valuation of startups in India and more caution on the part of investors that will price IPOs, especially anchor investors.

Similarly, Kotak Mahindra Bank executive vice-chairman and MD Uday Kotak said startups need to go through a health check-up before going public. This he said could prevent IPOs from running into troubles after hitting the market. “It should be the responsibility of startups to make sure investors have the opportunity for sustained growth, instead of only listing day gains,” he said. 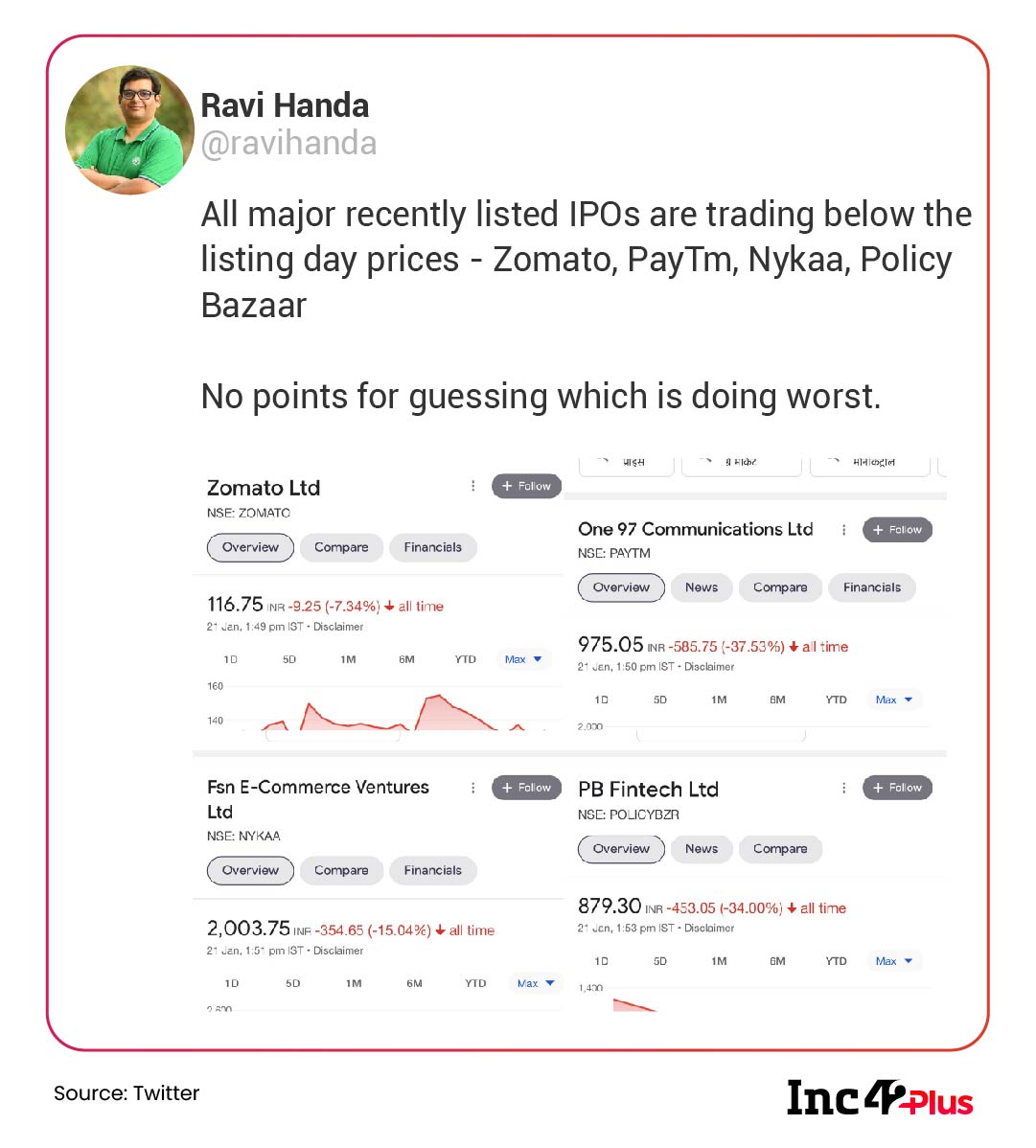 Is The Bull Season Over? Many in the startup ecosystem believe that a correction had been imminent for some time. Startup valuations have been overheated throughout last year as seen in the record number of unicorns in 2021.

While we have seen a bull run in the public markets since March 2020, as the pandemic impact eases and inflation kicks in, the focus is again on profitability, sustainability and long-term bets. As we had predicted at the end of the record-breaking 2021, the nature of tech IPOs in India will change and companies will look at more conservative valuations and pared-down business models in 2022.

Wealth management startup INDMoney topped the funding charts this past week with it’s $86 Mn Series D round that valued the startup at $640 Mn. Overall, the Indian startup ecosystem saw 50 disclosed funding rounds in the past week with a total of $519 Mn raised. 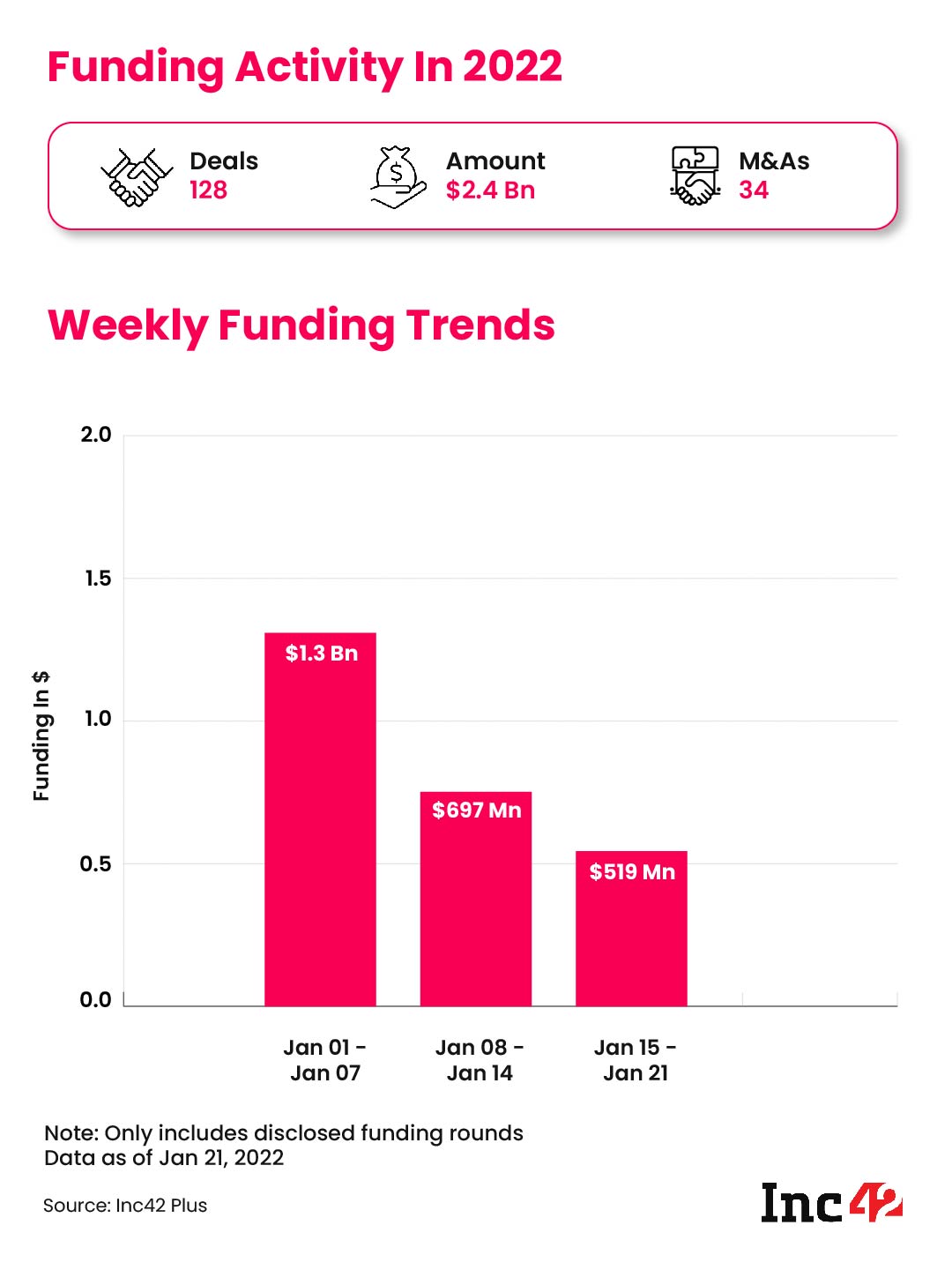 That’s all for this week! We’ll be back with our weekly wrap-up next Sunday!