Never Give Up: Patanjali To Launch Kimbho Again On August 27

Never Give Up: Patanjali To Launch Kimbho Again On August 27 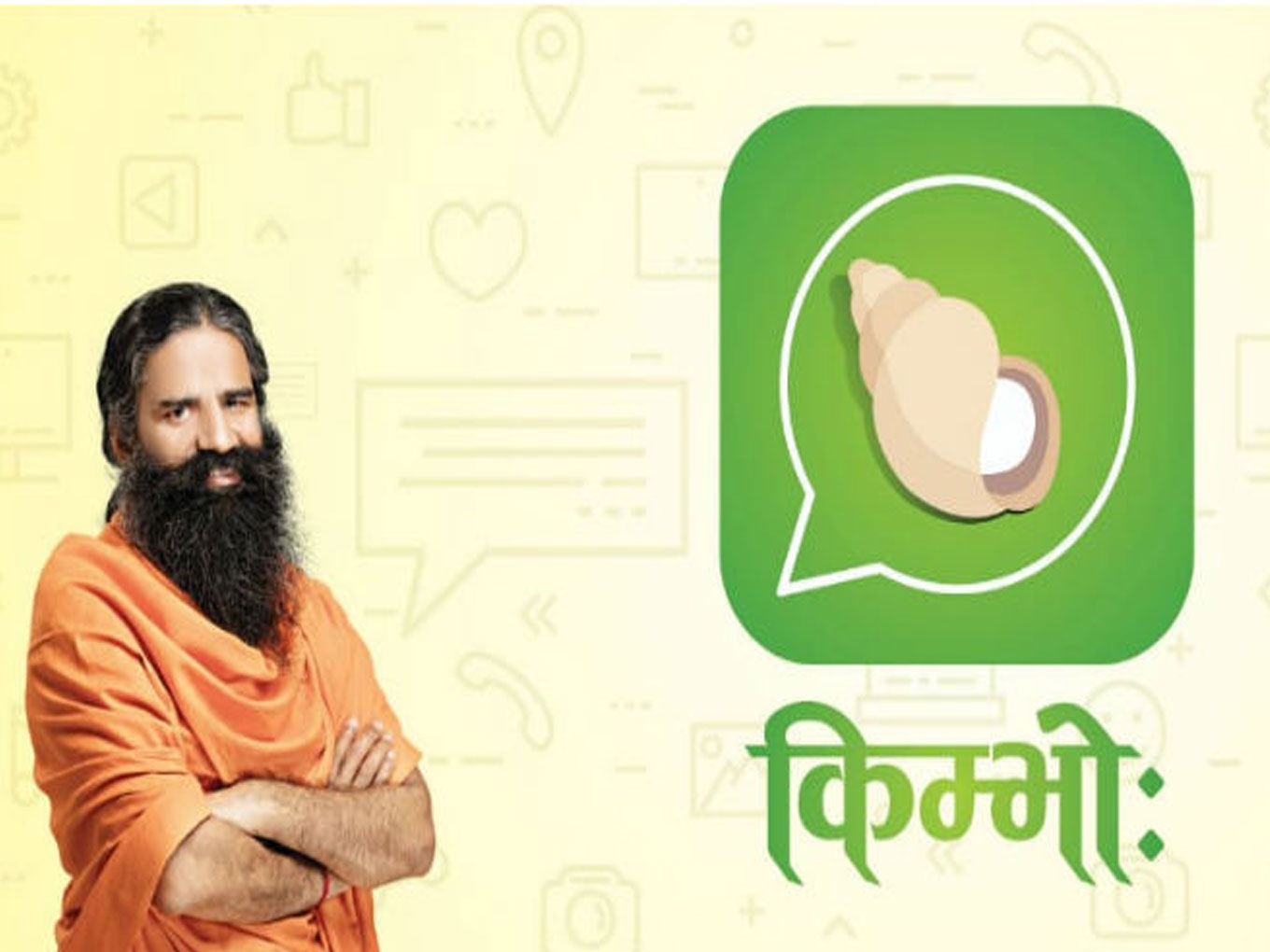 These lyrics from a song by Jason Walker seem to be the real-life story of Patanjali’s Kimbho app. Patanjali shot for the sky — with grand plans to challenge the hugely popular Facebook-owned chat messaging service WhatsApp — with its Kimbho app, launched in end May.

However, the app, which it tried to sell as a swadeshi chatting platform, never really took off the ground, and Patanjali had to pull it off Play Store due to technical glitches and security concerns.

But Patanjali seems to be a great believer of “try and try until you succeed” — it has announced the revival of the Kimbho app, which is ready with new features to be launched on August 27. 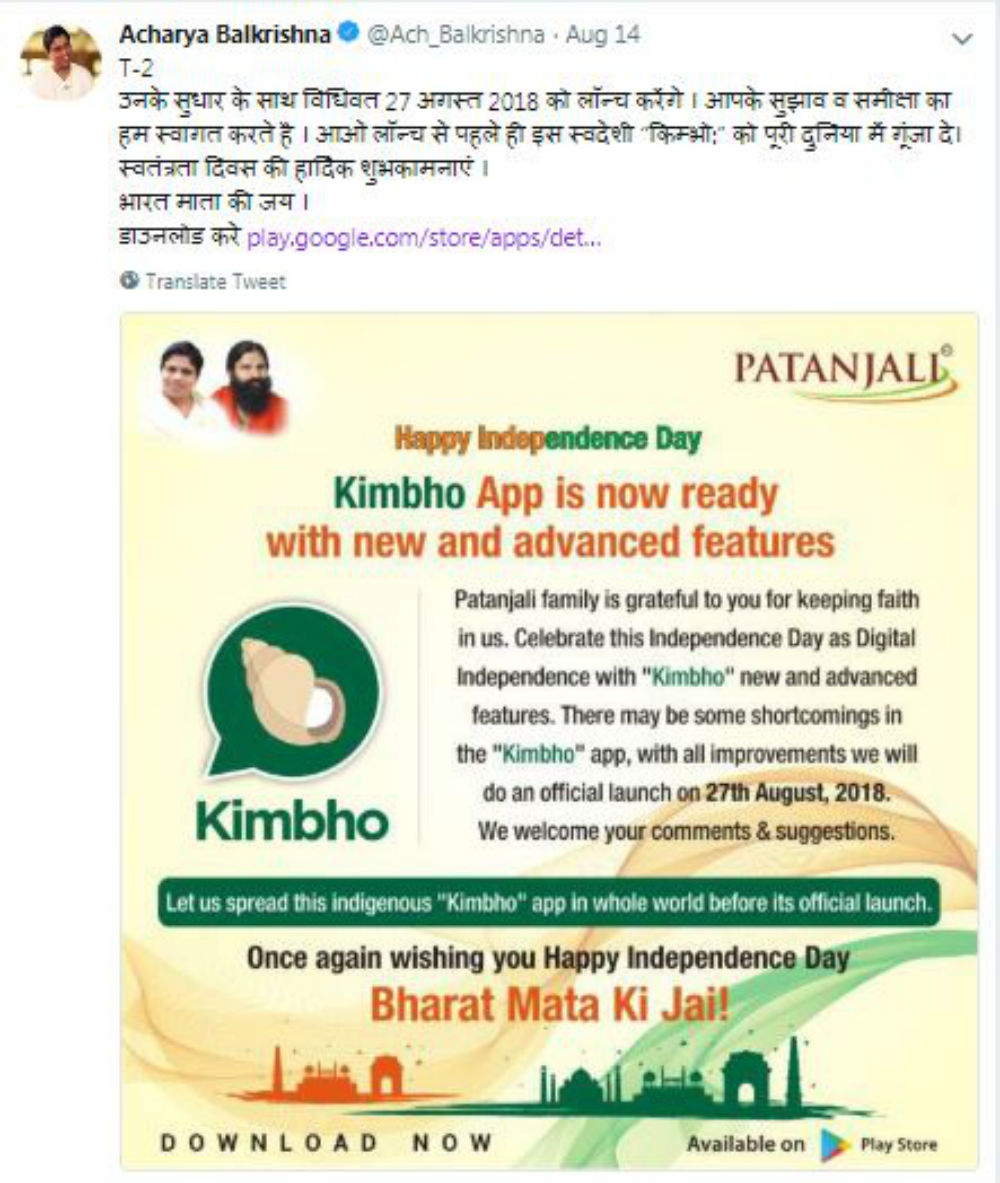 He added that the app would be launched after fixing the “shortcomings”.

Patanjali spokesperson S K Tijarawala told ET, “We have put the trial version of Kimbho on the Google Play Store so that we come to know about the shortcomings. We are open for any amendments of any errors and we have invited feedback from the people also.”

He added that Kimbho will be a “safe, secure, and swadeshi” messaging platform.

“Now we are expecting millions download during the next 12 days of trial period and we have built a load capacity for that,” he said, adding “on August 27, Union minister for road Nitin Gadkari, along with Baba Ramdev and Acharya Balkrishna, will launch the swadeshi app.”

Patanjali had launched the Kimbho app amid much fanfare on May 30 as part of a test run. Kimbho seemed to have borrowed heavily from WhatsApp — Kimbho means ‘Whats Up’ in Sanskrit and its green logo looks similar to WhatsApp.

Soon after the launch, many users faced issues in downloading the app on the Play Store. Soon after that, some serious data security breach allegations were made none other than Robert Baptiste, aka Elliot Alderson, on Twitter, who called it a “security disaster”.

He tweeted: “@KimbhoApp before trying to compete #WhatsApp, you can try to secure your app. It’s possible to choose a security code between 0001 and 9999 and send it to the number of your choice #kimbhoApp.”

Another tweet read: “This @KimbhoApp is a joke, next time before making press statements, hire competent developers… If it is not clear, for the moment don’t install this app .#Kimbho #KimbhoApp”.

The very next day the company withdrew its messaging app and said that it would launch the app officially once its technical development was completed.

At the time, Patanjali had claimed that Kimbho had witnessed around 150K downloads within three hours after its trial version was launched on Google Play Store and App Store.

The Baba Ramdev-led Patanjali has taken the swadeshi movement up many notches by tapping into various verticals and marketing its various products on the “desi” plank. It has taken on the likes of the decades-old Nestle Maggi with its Patanjali noodles, established toothpaste brands such as Colgate, Close Up, and Pepsodent with Patanjali Dant Kanti and even Britannia and Sunfeast with its biscuits.

The company then decided to take digital swadeshi. After launching its own SIM (with BSNL), Patanjali launched Kimbho, touting it as a swadeshi solution to the likes of WhatsApp, WeChat, and other foreign messaging platforms in India.

In light of the security disaster during its first launch and the tall claims made by Patanjali — the second time around — the re-launch of the “safe, secure, and swadeshi” messaging platform Kimbho on August 27 is going to be an exciting watch.