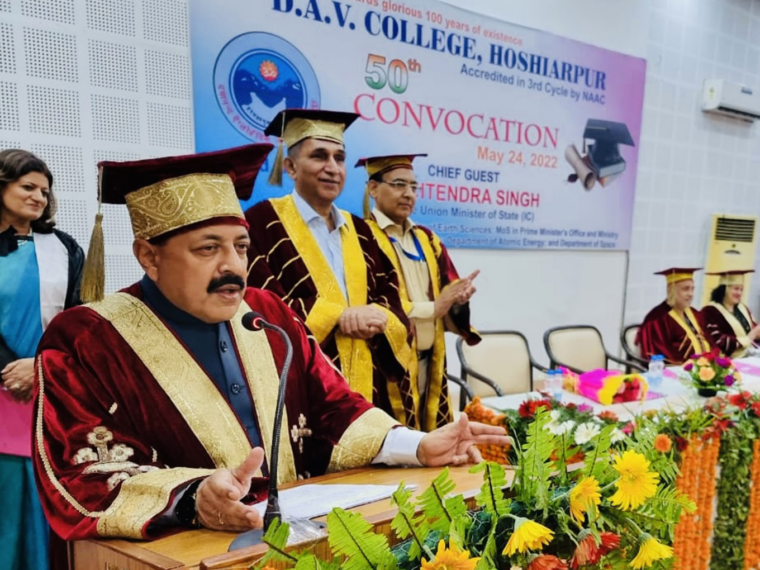 North India and particularly Punjab must promote startups as an alternate source of livelihood: Singh

Union Minister of State (MoS) for Science and Technology Jitendra Singh on Tuesday (May 24) said that the National Education Policy (NEP) 2020 supplements the startup ecosystem in the country.

Addressing the 50th Convocation of DAV College in Punjab’s Hoshiarpur, Singh said that the NEP 2020 promises to open new career and entrepreneurship opportunities for students and youth in India.

In the context of Punjab, the MoS said that the NEP 2020, coupled with the current startup ‘surge’ in the country, offers the state a ‘rare opportunity.’

“North India and particularly Punjab must come forward fast to promote startups as an alternate source of livelihood,” Singh said.

Commenting on the whopping number of students migrating abroad, the minister urged the youth to ‘look up’ for the numerous opportunities provided by the government…for startups, research & development (R&D) and innovation. He further expressed confidence that the current generation will ‘play a significant role to reverse the brain drain phenomenon’.

Interestingly, Flipkart founders Sachin Bansal and Binny Bansal, and Ola founder Bhavish Aggarwal are a byproduct of Punjab’s education system, having been born in the state. However, they went on to build their businesses outside the state. Barring a few, the startup ecosystem in the state is yet to make a mark on the national level.

However, the ‘States’ Startup Ranking 2019’ report, released by the Union Ministry of Commerce and Industry, recognised Punjab as an ‘aspiring leader’ in developing a strong startup ecosystem in the state. Most of the startup activity in the state is concentrated around the tri-city area – Chandigarh (Union Territory and joint capital of Punjab and Haryana), Mohali (part of Punjab) and Panchkula (part of Haryana).

Chandigarh plays host to big startups such as ride-sharing platform Jugnoo, which has raised $16 Mn in funding so far. Agritech player AgNext, which raised $21 Mn in Series A funding last year, also has its headquarters in the city. Other startups such as fintech player PayMart, greentech startup A2P Energy, internet of things (IoT) startup Waypals, deeptech startup Aiotize, among others, also call Chandigarh their home.

Cities like Amritsar also have a sizable number of startups in digital marketing and graphic designing sectors such as Dilemmas Diluted, Digikaps Techies Infotech, among others.

According to an Inc42 report, more than 1,436 startups were launched in the country in 2021. In total, homegrown startups raised $42 Bn in 1,579 deals last year. Meanwhile, Indian startups raised $14.3 Bn in funding across various rounds in the first four months of 2022.