According to sources at various exchanges, approximately 2.3 Lakh Indians had invested in crypto token LUNA which has lost nearly all its value

Starting from May 7 To May 13, LUNA Foundation sold over 80K bitcoins, 26 Mn Tether and 23 Mn USDC in order to save the two cryptocurrencies Terra USD and LUNA

Well things went wrong because Terra tried to back its stablecoin with its own issued token indirectly, says Sidharth Sogani of CREBACO

The recent crash in crypto token LUNA wiped out the investments of nearly 2.3 Lakh Indians.

Approximately 2.1 Lakh Indians lost their investments in LUNA in the last seven days, sources at seven leading exchanges which include WazirX, BuyUCoin, CoinDCX, Unocoin and other exchanges told Inc42. Taking all the other exchanges into account, the number could go as high as 2.3 Lakh, a crypto data analyst further estimated.

LUNA, which is another coin of the Terra blockchain ecosystem, provides users staking rewards and governance power on Terra blockchain. The fall in its value was steeper as it fell from $75 on May 7 to almost zero now.

How Could A Stablecoin Be So Unstable

Cryptocurrencies are infamous for their volatility. Take Bitcoin for example. The leading cryptocurrency was trading at $19.5K in December 2017 and declined to $3.4K by March 2018. Similarly, it crashed from $69K to $30K in the last few months.

While the sharp fall in Bitcoin can be attributed to the inherent volatility of the cryptocurrencies, the decline in the price of stablecoins is not expected. Terra USD was pegged to US dollar and it was supposed to be valued around $1 with marginal fluctuations.

For the uninitiated, stablecoins are cryptocurrencies where the price is designed to be pegged to a cryptocurrency or fiat money, or to exchange-traded commodities such as gold.

Stablecoins thus use various forms of reserves to back their price stability. However, in multiple cases, these are not fully backed as promised. In the case of Terra USD, Terra protocol uses a combination of open market arbitrage incentives and decentralised Oracle voting to maintain demand and supply and thus, the price of Terra. The protocol ensures the supply and demand of Terra is always balanced, leading to a stable price.

According to a statement by the LUNA Foundation Guard (LFG), until May 7, 2022, it held a reserve consisting of the following assets:

Come May 8, 2022, as UST price started to drop by significant margins, LFG  began converting the reserve to UST in order to maintain the supply and demand and thus the price.

“The Foundation is looking to use its remaining assets to compensate remaining users of $UST, smallest holders first,” it said in a statement.

While the future is said to be decentralised, the existing actualities are not as true as promised in the protocols.

Commenting on the fiasco, Ethereum founder Vitalik Buterin tweeted, “With the one quibble that “algostable” has become a propaganda term serving to legitimise uncollateralized stables by putting them in the same bucket as collateralized stables like DAI/RAI, and we need to really emphasize that the two are very different.”

Sidharth Sogani, founder and CEO of blockchain research and analytics firm CREBACO, questioned the very decentralised nature of Terra. He said, “Well things went wrong because Terra tried to back its stablecoin with its own issued token indirectly. Also, the blockchain was run by a handful of validators. Hence it was not truly decentralised.”

Meanwhile, Terra founder Do Kwon came under criticism on Twitter for the steep fall in the value. He soon started blocking people including Dogecoin founder Billy Markus who criticised Kwon for failing to secure the investors’ money. 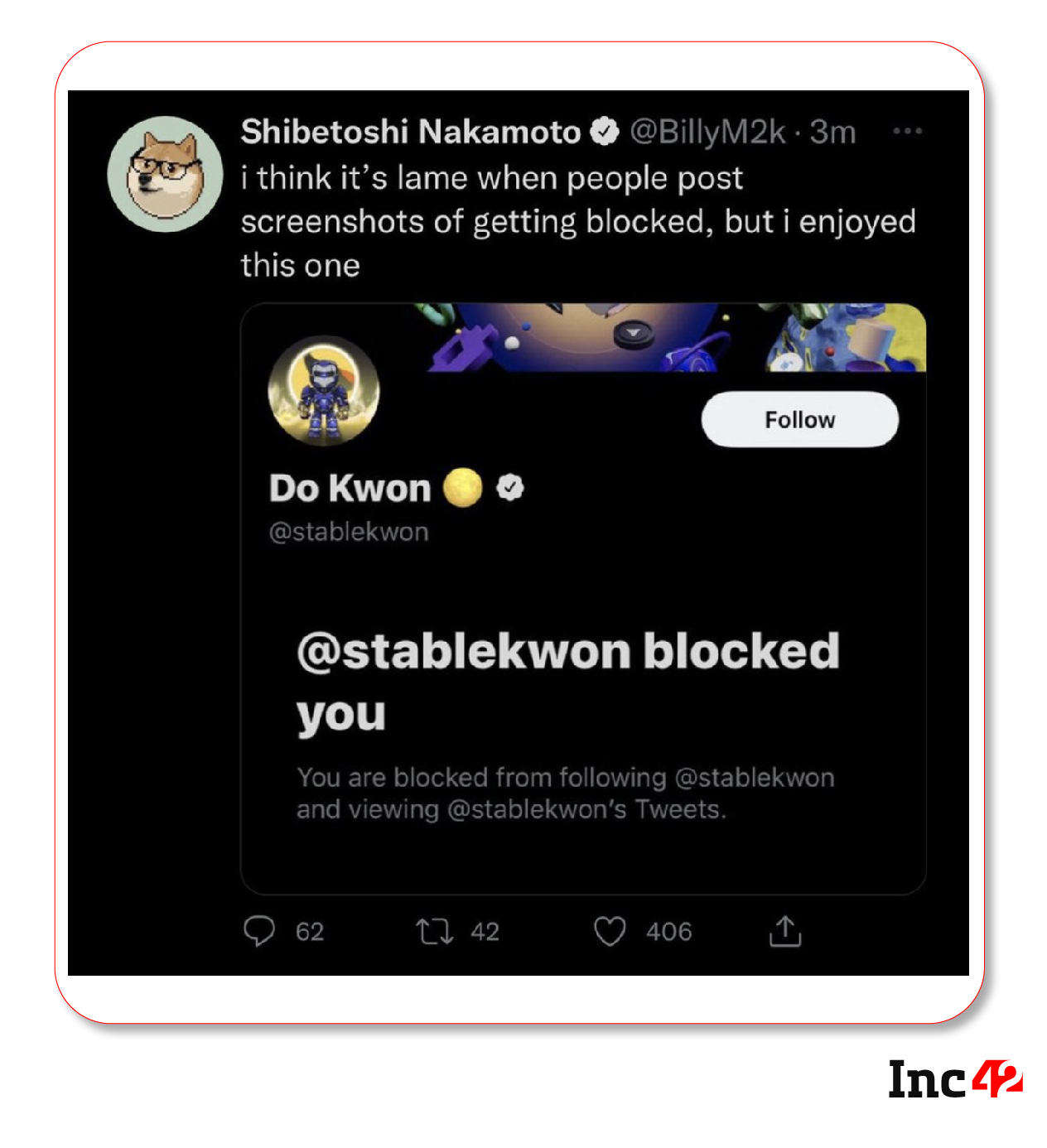 Markus went on to say, “I agree that he should block me – I am not helping his platform, as someone who doesn’t like psychopath level people who destroy trust in the entire crypto space.”

Indian Investors Follow The Money More Than The Technology

Unlike the crypto investors in the West, a large number of Indians have been scammed through various crypto scams. Whether it is Bitconnect, GainBitcoin or crypto scams, India remains the hotbed of some of the biggest crypto crimes.

Further, according to a report by Gemini, India houses the largest number of first-time investors who mostly invest in crypto hoping to get some big returns. The crypto education level is very low at the technology level. As a result, people cannot verify the robustness of the tokens they invest in.

Owing to the lack of adequate knowledge, Indians have been an easy hunt for scammers while investors are struggling to reap the benefits of the crypto ecosystem.