MyNoticePeriod Gets INR 18 Cr. From IDG Ventures India In Series A

MyNoticePeriod Gets INR 18 Cr. From IDG Ventures India In Series A 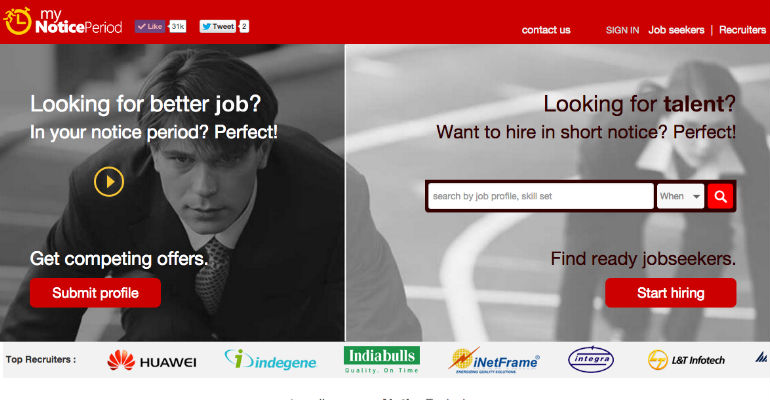 Bangalore-based online recruitment startup myNoticePeriod has raised INR 18 Cr. in Series A round of funding led by IDG Ventures India. This round came in just a few months after it had raised over INR 2 Cr in a seed round led by IDG Ventures India and individual Investors including Prashant Kirtane, CTO and co-founder of travelmob.com, Shamsunder Talreja, owner of JetSet Capital, and Ravi Gururaj of Frictionless Ventures among others.

The startup plans to deploy the funds raised to expand it’s team and enhance our technology platform. Going forward, the company will also be introducing a pool of people who are actively looking for a job change as well.

myNoticePeriod was founded by Manjunath Talwar alongwith his former Yahoo colleague Abhijit Khasnis. The startup works like a marketplace connecting recruiters with the potential candidates. It is targeted towards recruiters who are looking for quick hire; thus, needs people who could join the company on immediate basis, which includes people who are already serving notice period are the ideal one. Cracking this thing myNoticePeriod was launched as India’s first and only job portal for notice period candidates.

As per the company, currently, it has over 80,000 job seekers on its portal and over 5,000 recruiters have signed up for its service.

Recently, it has also rolled out an Android app that allows faster real-time communication between recruiters and candidates using WhatsApp, SMS and schedulers.

myNoticePeriod is incubated at the Nasscom Startup Warehouse.