Movers And Shakers Of The Week [August 3-8]

Movers And Shakers Of The Week [August 3-8]

Paytm has announced the appointment of Bhavesh Gupta, as Chief Executive Officer of the company's lending business 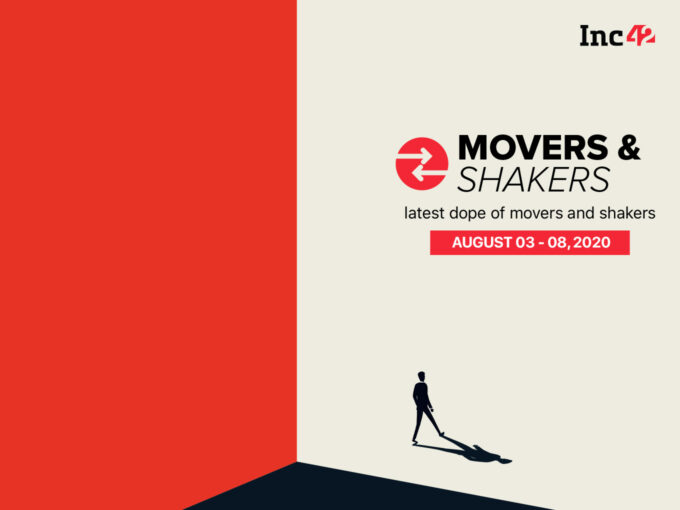 Yadav was last working with Star India, where she led Marketing and also served as President, Consumer Strategy & Innovation. She started her career in Procter & Gamble in Brand Management and later joined General Mills India where, as Chief Marketing Officer, she was responsible for launching the Pillsbury brand and for creating multiple categories in the then-nascent packaged foods market.

In addition to her role as CMO for Sequoia Capital India, Yadav will also work closely with the portfolio CMOs to help them launch and grow brands.

Gore, who served most recently as the Group CTO of Gojek, joins Sequoia Capital as Operating Partner, Technology, based in Singapore.  He founded CodeIgnition, which was acquired by Gojek, and prior to that served as CTO for hoppr (which was acquired by Hike Messenger) and Head of Technology for ThoughtWorks.

He will work closely with portfolio CTOs and CPOs by providing insight and expertise in building and scaling engineering, data science, product and design functions, and helping our CTOs build and mentor high-performing teams.

He will also help Sequoia expand the focus on Technology along with the director of technology, Anandamoy ‘Roy’ Roychowdhary, who has led this function for Sequoia India for the last seven years. Roy has transitioned into a full-time investment advisory role as a Principal with the Surge team, focused on SaaS, AI, dev tools and infrastructure investments.

Kohli will work with industry bodies and associations and will facilitate dialogue and collaboration between our startups and governments in India and SEA to enable progressive policy frameworks to strengthen our startup ecosystem. She will also advise Sequoia portfolio companies on public policy and regulatory topics.

Further, this week, Uber announced that it is recruiting 140 more engineers for its tech teams in Bengaluru and Hyderabad to build cutting-edge products in areas such as rider and driver growth, delivery, marketplace, customer service, digital payments, risk and compliance, safety, and finance technology.

Here are the other movers and shakers of the week.

Noida-headquartered Paytm has announced the appointment of Bhavesh Gupta, as Chief Executive Officer of the company’s lending business.

Gupta will develop and expand Paytm’s lending services to strengthen the company’s vision of financial inclusion. Under his leadership, the company will continue to simplify, innovate, and bring new credit products to millions of Indians & SMEs in partnerships with other banks and NBFCs. He will be reporting to Amit Nayyar, President at Paytm.

With over two decades of experience, Gupta has led the digital transformation journey of some of the top retail banks and NBFCs in the country. Most recently he served as the Founding Member & CEO of Clix Capital, where he focused on building a well-diversified NBFC in digital consumer and MSME lending along with urban affordable housing segment driven by cutting edge technology and analytics to deliver simple, fast, innovative, and customised solutions to customers.

Prior to this role, he was Founding Member and Head – SME & Business Banking at IDFC First Bank for two years. He has spent more than a decade at ICICI Bank where he played a senior role across retail banking, both on liabilities and lending side of the business.

Esports startup Mobile Premier League (MPL) has appointed Himanshu Raj as HeadBrand Communication. In his new role, he will be responsible for taking MPL’s reputation and messaging forward through strategic corporate reputation management campaigns, as well as positioning the brand as a thought leader in the booming Indian esports universe.

He has earlier been associated with a diverse range of industries such as technology, sports, aviation, retail, FMCG, and hospitality. He has led brand communications for Zeta, Flock, IBM Labs (India/South Asia), as well as managed reputation for brands like Nike, Procam, Speedo, Philips R&D and several other brands that are global leaders in their respective categories.

MPL is a Mobile Gaming and Esports platform with over 40 Mn registered users and currently has over 50 games, including titles like FreeFire and World Cricket Championship.

Global power transmission player Sterlite Power announced the appointment of Anoop Seth as an independent director of the company. He will advise the Board and leadership team on matters related to strategy and growth.

With a career of over 35 years in financial services and several infrastructure sectors, Seth is a distinguished leader in the infrastructure and finance sectors. He has held leadership positions in companies such as AMP Capital, Bank of America, Bechtel Corp, IDFC, Reliance Industries, Standard Chartered Bank, and IL&FS Energy.

He completed his MMS from BITS Pilani in 1982 with a major in Finance, and Executive International Management Programme from INSEAD, France in 1993.

Stay tuned for the next edition of the movers and shakers of the week.