Ambani noted that MSMEs account for 70% of India’s employment

Under the partnership, Microsoft will enable cloud access to Reliance data centres 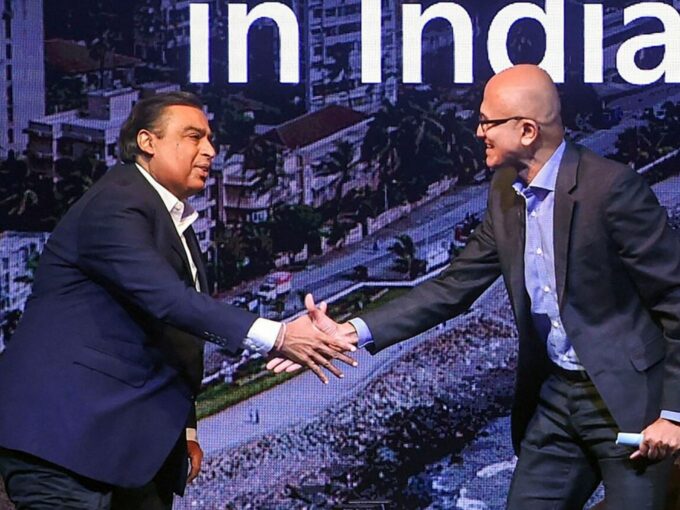 With increased digitisation and connectivity across the country, Reliance Industries chairman Mukesh Ambani has been pinning hope on its cloud partnership with Satya Nadella-led Microsoft.

Speaking at Microsoft Future Decoded–Tech Summit in Mumbai, Ambani said that Microsoft and Jio would work together to drive a technologically-enabled India by facilitating digitalisation and cloud computing for several businesses – startups, micro-enterprises, merchants, shopkeepers and large enterprises.

Last year, Ambani, at Reliance Industries’ annual general meeting of August 2019, had announced its partnership with global tech giant Microsoft. Microsoft CEO Nadella was also virtually present at the time of the announcement.

Ambani also noted that micro, small and medium enterprises (MSME) make up for 70% of India’s employment, drive 40% of total exports and are an essential part of the economic activity. However, the sector has been able to achieve this without any technical enablement and adoption, Amani added.

The Reliance chairman added that Indian is on the cusp of becoming a premier digital society and will be in the top three economies in the world.

Under the partnership announced in 2019, Jio will set up data centres across India, where Microsoft will bring its cloud platform, Azure.  “Our long-term partnership combines the power of our technology – including Azure, Azure AI and Office 365 – with Jio’s connectivity and digital solutions – which as you know are among the most used and fastest-growing in the world. Together, we will offer comprehensive technology solutions – from compute and storage, to connectivity and productivity – to SMBs everywhere in the country,” Nadella had said at the time.

At the Microsoft Future Decoded,  the tech giant announced its partnership with the State Bank of India (SBI) Foundation to create opportunities for persons with disabilities working in the banking, financial services, and insurance (BFSI) sector.

Besides that, Microsoft also launched a 100X100X100 accelerator programme for Software-as-a-Service startups in India. The company will shortlist around 100 startups between Series A and C round to be part of the programme. So far, the company has zeroed down on 50 companies.

The 100X100X100 programme aims to turn shortlisted startups into profitable companies. For this, Microsoft will help by increasing the startup’s revenue and client base.

Nadella also announced that Microsoft will make engineers more employable by investing in improving the skills of software engineers.