“I want to connect everyone in the world to India which is the largest democracy”: Mark Zuckerberg

“I want to connect everyone in the world to India which is the largest democracy”: Mark Zuckerberg 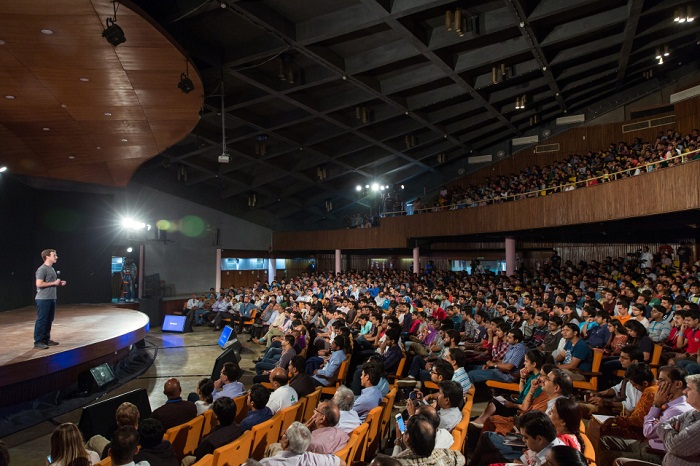 After PM Modi’s visit to Facebook headquarters last month, it was Mark Zuckerberg’s turn to reciprocate the same gesture. Zuckerberg held a Townhall session with IIT Delhi students today as part of his India visit.

Facebook founder’s Townhall and Q&A session with the IIT students, ranged from topics such as net neutrality to India being a big market for Facebook, to elements of a good startup, among others.

Touching on the topic of net neutrality, which had been deftly avoided at PM Modi in Silicon Valley, Zuckerberg voiced his support for the principle in terms of regulations and building an open platform for any developer.

He summarised that good net neutrality provisions should block things that operators might do to hurt people, but at the same time prioritise things like zero rating that are necessary to connect everyone to the internet.

He advocated that 15 Mn people worldwide now are online due to Internet.org.

Internet access to everyone and especially in India which is the most important market for Facebook was another theme Zuckerberg spoke on.

As per Mark, “There are about 4 Bn people in the world who do not have internet access; so many people are robbed of opportunities. That is why I care so deeply about it. In India, this number is about 1 Bn and Facebook will continue to work towards bring this next billion people to the Internet and will invest towards those effort.”

In light of this week’s earthquake which hit India, he stated that the safety check feature tool that Facebook started, has already helped 30 Mn people in India.

As per new updates, Facebook might roll out the Amber alerts in the US, Canada which puts photos of missing children in people’s news feeds, to other places as well.

Facebook has made many investments in the schools of Africa. Zuckerberg hoped to bring them to India too.

Stating the future projects of Facebook Mark said that they are working on AI project that would describe photos to blind people. He added that virtual reality was the future and Facebook intended to build computer systems that are better than human senses. He added, “In future we would be able to put on a headset (virtual reality headset Oculus Rift) and just travel anywhere in the world to do anything we want.”

In comment on the startup topic he said, “There was not one moment when I had a revelation that Facebook would be this big.”

He added that products built on a scale as big as Facebook are not built by one person or conceived in one eureka moment. He stressed on the importance of not shying away from mistakes and added that if one is working on something that one cares about then it is more likely to do well.

He also said that no matter what one does, one is bound to make mistakes.

He aptly concluded by replying on the element of good startup as, “All the great companies are started with people who cared about something.”