Mahindra And Mahindra Forays Into Shared Mobility Space With Glyd

Mahindra And Mahindra Forays Into Shared Mobility Space With Glyd

Glyd will have features such as video conferencing during commute

Mahindra has partnered with Cisco, Vodafone and others for this service

Mumbai-based automobile company Mahindra & Mahindra has reportedly forayed into the shared mobility space with the launch of Glyd, a tech-based emobility service.

The company launched the service for some select routes in Mumbai and flagged off the first batch of 10 electric Mahindra Veritos under this initiative on February 25. 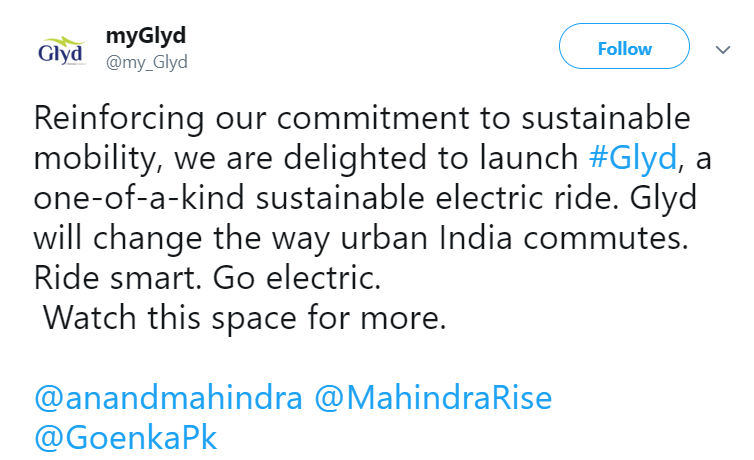 Through the Glyd app, the company aims to provide personalised transportation needs to extend better in-commute experience to office goers. The service will allow video-conferencing and offer advanced connected car features such as curated entertainment and music content.

The company is also reportedly planning to offer premium services such as privacy screens, air purifiers and strain-free lighting.

Mahindra has joined hands with Cisco, Vodafone and other such content and services providers for offering these services.

Initially, the service will be available on select routes such as the Bandra Kurla Complex and Lower Parel hubs in Mumbai. The company plans to extend the services in other cities within a year.

With this initiative, the company is mainly targeting corporate clients in cities such as Mumbai, Delhi, Bengaluru, Chennai, Hyderabad and Pune.

Commenting on the launch, Mahindra Group chairman Anand Mahindra tweeted, “Well it’s a different service from what the existing players provide. We think there’s room for many differentiated offerings in the ride-sharing space”.

Citing company sources, a report claimed that one can expect to pay 10% over what an average Uber commuter would pay but will receive a range of personalised offerings.

This initiative comes in at a time when the Indian government is encouraging the consumers for electric vehicle adaption and boost emobility in India.

Earlier this month, it was reported that Mahindra which joined hands with Uber in 2017 is finalising partnerships with many city municipal corporations in order to provide last mile zero emission connectivity in the Indian cities. The companies are reportedly in talks with authorities in Delhi, Hyderabad and Bengaluru to supply and operate electric taxis and three wheelers.

Most recently it was reported that the central government will reportedly consider approval of the second phase of  Faster Adoption & Manufacturing go Hybrid and Electric Vehicles (FAME) scheme this month with an outlay of INR 5,500 Cr for a period of five years.

However, the high potential electric vehicle market in India is yet to take off and the major setback being faced by the companies is the lack of proper infrastructure and clear cut policy.

While the central government continues to reiterate its aim to get India lead the emobility revolution in the world, the plan looks doubtful.

Bengaluru-based cab hailing giant Ola which had launched its electric vehicle project in Nagpur in 2017 had failed within nine months of its pilot. The Ola drivers were looking to return their electric cars and switch back to petrol or diesel cars citing high operating expense and long waiting time at charging stations.