During The Maharashtra Technology Summit, CM Fadnavis Emphasised The Importance Of BaaS In Reducing Trust Deficit In E-Governance 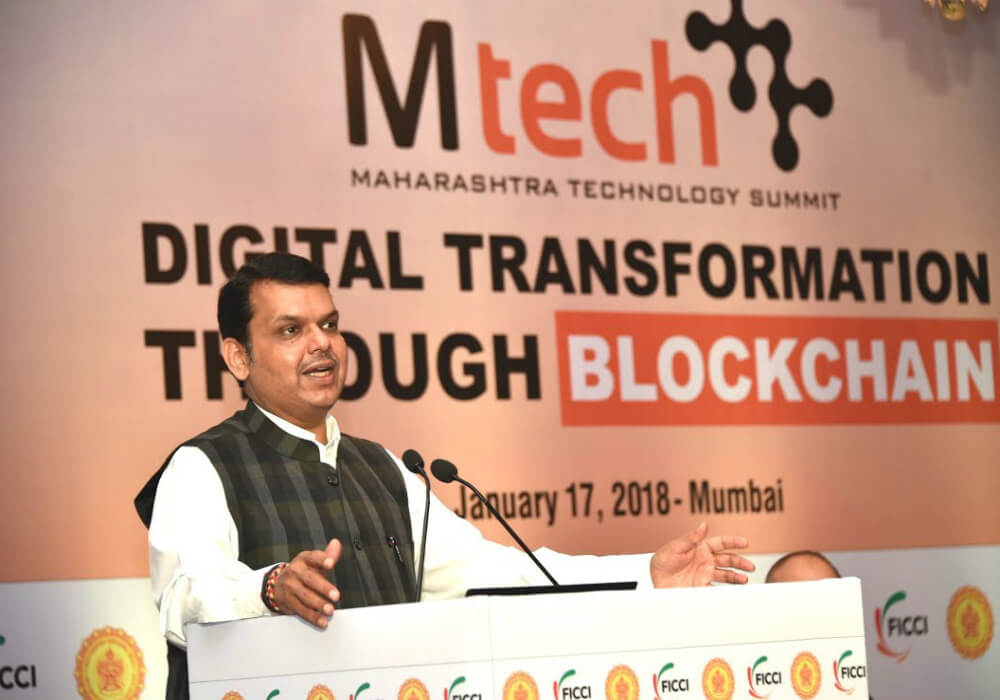 While unveiling the state’s cloud policy at the Maharashtra Technology Summit 2018 on January 17, 2018, CM Devendra Fadnavis stated that blockchain can transform e-governance and the governments must start interacting with technology providers to find solutions and put them to the best possible use to make public delivery of goods and services transparent.

The CM also invited blockchain startups to come up with proper solutions on governance which could become part of the state government’s governance delivery systems.

The Maharashtra Technology Summit (MTECH) 2018 was jointly organised by FICCI and the Government of Maharashtra in Mumbai. Revolving around the theme of ‘digital transformation through blockchain’, the summit saw over 600 delegates and 50 plus CEOs participating in the deliberations to chalk out a roadmap for implementing blockchain technology and the policy support required to do it quickly and efficiently.

Speaking on the importance of Blockchain-as-a-Service (BaaS), Fadnavis opined, “This will reduce the trust deficit between businesses and citizens with government departments. Communication technologies over the years have changed the world, first we connected places, then people and now we are connecting things, but blockchain is one level up and it’s not just Internet of Thing (IoT) but, it is internet of trust, internet of values and it is going to change the entire space of governance.”

Blockchain is a Distributed Ledger Technology (DLT) that allows all members to record transactions in a decentralised data log maintained on a network of computers, rather than a physical ledger or a single database. Transactions are approved by consensus, and everything is secured through cryptography.

Last year, Telangana and Andhra Pradesh organised global blockchain conferences and hackathons to explore the platform applications in their states. The state governments have also invited international blockchain players, banks and startups to invest and operate in the states.

In Karnataka, backed by the state government, a ‘Blockchain Hackathon for Governance’ is being held between January 19-21 at the Koramangala Indoor Stadium. It will be a fast-paced event designed to create demonstrable prototypes utilising blockchain in government applications.

Fadnavis said, “Government of Maharashtra, for the past three years, has been trying to create an ecosystem for adopting technologies into governance. We feel that technology brings, efficiency, transparency, accountability and accessibility and that is why we have been trying to assimilate the newest technologies into all our governance. Smart cities, which need smart and accountable governance, require strong technology backbone to provide all services and activities in an accountable and transparent manner.”

He also informed that the Maharashtra government has unveiled its public cloud policy, which will allow all government departments to access public cloud. This will accelerate e-governance and open up entire new area for investment by the private entrepreneurs to make available newest technologies for all the departments as the government is not only the biggest data creator but also a consumer.

SVR Srinivas, Principal Secretary – IT, Government of Maharashtra said. “Blockchain is a tsunami coming up and it’s not just some regulations, therefore we should be prepared for it. To apply blockchain, the government intends to work with PoC and use cases, where blockchain can be actually used such as identities, movement of assets, transactions or otherwise, wherever data has to be distributed.”

The summit has four policy groups to deliberate on blockchain implementation, suggestions and roadmap will be chalked out as an outcome of Maharashtra Technology summit.

Expressing FICCI’s enthusiasm to collaborate more with the government, Rashesh Shah, President, FICCI stated, “Since blockchain is a new upcoming technology, the industry needs supportive policies framework to bring focus on growth and development of this emerging area.”

A FICCI – Deloitte report on Blockchain in Public Sector – Transforming government services through exponential technologies was also released by the Chief Minister of Maharashtra.

At the Maharashtra Technology Summit, CM Fadnavis also announced the launch of cloud policy which will help implement blockchain in e-governance.