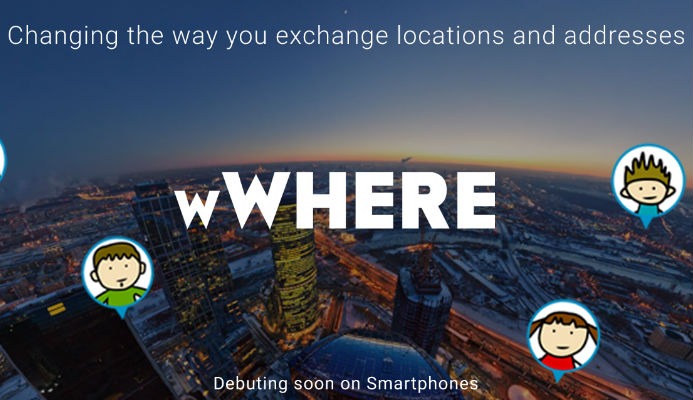 Ahmedabad-based wWhere, which lets people to share their location with each other has received commitment of over INR 1.2 Cr in funding from a consortium of angel investors across US, India and Singapore.

Ashim Mehra, VP at Baron Capital, Anunay Gupta, representative of the Lead Investor in this deal and co-founder of Marketelligent, also participated in this round of funding.

Incubated at IIM Ahmedabad’s Centre for Innovation Incubation and Entrepreneurship (CIIE), the startup aims to solve the daily problem of exchanging locations with people and businesses around us, using advanced algorithms and a very simple front-end.

How does it works?

In the world of smartphones, we are still stuck with the conventional method of sharing or finding locations using street names, closest landmarks or better still, asking autowallahs and pedestrians for directions. We come in to replace the “Where are you?” texts, which amount to a whopping 30% of total text messages sent by smartphone users across the globe in different languages and context. wWhere enables people and businesses to locate each other effortlessly by being ‘Uber for everything, explains founder Ritam Bhatnagar.

The startup was in private beta for 12 hours in September, and witnessed over 500 downloads and 2600 signups in that short span of 12 hours.

Going further, the startup is now working for a global launch, targeting countries in Asia, Australia and Europe.

It is to be noted that even before the launch, the product has generated a great buzz with more than 6500 signups across 11 countries. In order to test the working model of the app, wWhere started with a live beta model for a limited window download.

Ashim Mehra, VP at Baron Capital, a venture finance firm based in New York, is also one of the investor and brings in a fresh perspective on table about the universal appeal of the app, saying, “With location related awareness being on a constant rise, the addressable market for this product is large. In what might seem like a crowded space, the team has spent and continues to spend a lot of time working through real-world use cases that would differentiate the end-product”.

Khushalee Vakil, Sr. Manager – Angel Affiliations at CIIE said, “We found an entrepreneur with the prior experience of running a startup, working on a scalable solution that provides a fast and easy way of location sharing. We were quick to incubate wWhere, as we believe the product has a lot of potential and addresses a continual problem with features like Groups and Auto-Locate.”

wWhere was founded by Ritam Bhatnagar in 2014. He is a leading Gujarati film producer and has founded Asia’s largest filmmaking challenge – India Film Project. The startup has a team of 9 now, working with an aim to make locations simplified in our otherwise strenuous lifestyle. Using advanced algorithms, the startup has been working towards re-defining macro-locations, thereby making locations more personified. Two versions of the product-a mobile app and a web-app, can both be accessed over any smartphone with data connection.