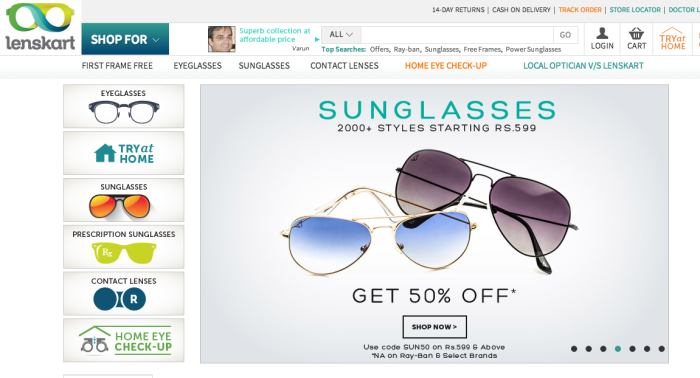 Updated: Lenskart today has confirmed that it has raised INR 135 Cr. in fresh capital from new and existing investors. Lenskart’s series C of fund-raising is a co-investment led by TPG Growth, with participation from Hong Kong based TR Capital and existing investor IDG Ventures for a significant minority stake.

Peyush Bansal, CEO & Founder, Lenskart commented: “In TPG, we found strategic partners and advisors with proven capability to build a large consumer centric enterprise. The TPG brand is another feather in our cap. With this new investment, we will be hiring the best talent and give them a world-class environment to innovate and solve India’s eyewear problems at a very large scale.”

Speaking about the deal, Manas Tandon, Director, TPG Growth said: “TPG globally is an active investor in the Internet sector. We are excited about the evolution of Internet in India and are delighted to partner with Lenskart as our first investment in this space. The Lenskart team brings to the table an impressive focus on customer service and keen commercial instincts, thereby building a dominant position in the eyewear space, while maintaining attractive unit economics.”

Valyoo Technologies, which runs eyewear-focused ecommerce firm LensKart is raising INR 135 Cr. in Series C round of funding from TPG Growth, Hong Kong-based TR Capital and its existing investor IDG Ventures. According to reports, with this new round the 4 year old Vayloo Technologies will be valued at over $100 Mn.

According to a filing at Ministry of Corporate Affairs, Vayloo has also received board approval for the investment.

Lenskart was launched in 2010 by Peyush Bansal and has since then seen a healthy growth of 300% in its turnover. The ecommerce firm offers prescribed and fashion eyewear from brands like Rayban, Oakley, Tag Heuer, Fastrack, Sprint, Vintage, Johnson & Johnson, Ciba Vision, Bausch & Lomb, and Cooper Vision etc.

The company also provides services like home eye check-up programme, try-before-you-buy, virtual studio or try on, new lenses in old frames, refer and win, as well as an exchange programme. With this it also has over 15 offline stores in the country.

Vayloo had previously raised $10 Mn from Ronnie Screwvala’s Unilazer Ventures and IDG Ventures in February 2013 and prior to that IDG had invested $4 Mn in the company in October 2011.

Vayloo Technologies also run BagsKart, JewelsKart and WatchKart, but while trying to log in to these three sites we were redirected to Lenskart. Previously, there were reports that Vayloo might sell three of its products, including BagsKart.com, JewelsKart.com & WatchKart.com, and shift its focus and resources on growing the fourth portal LensKart.com. However, the current status of the three is not clear. According to reports, the three contribute 30% to the company’s overall revenues.