Leading Media Companies Form DNPA To Curb Fake News, But Digital-Only Media Stays Away From It

Leading Media Companies Form DNPA To Curb Fake News, But Digital-Only Media Stays Away From It 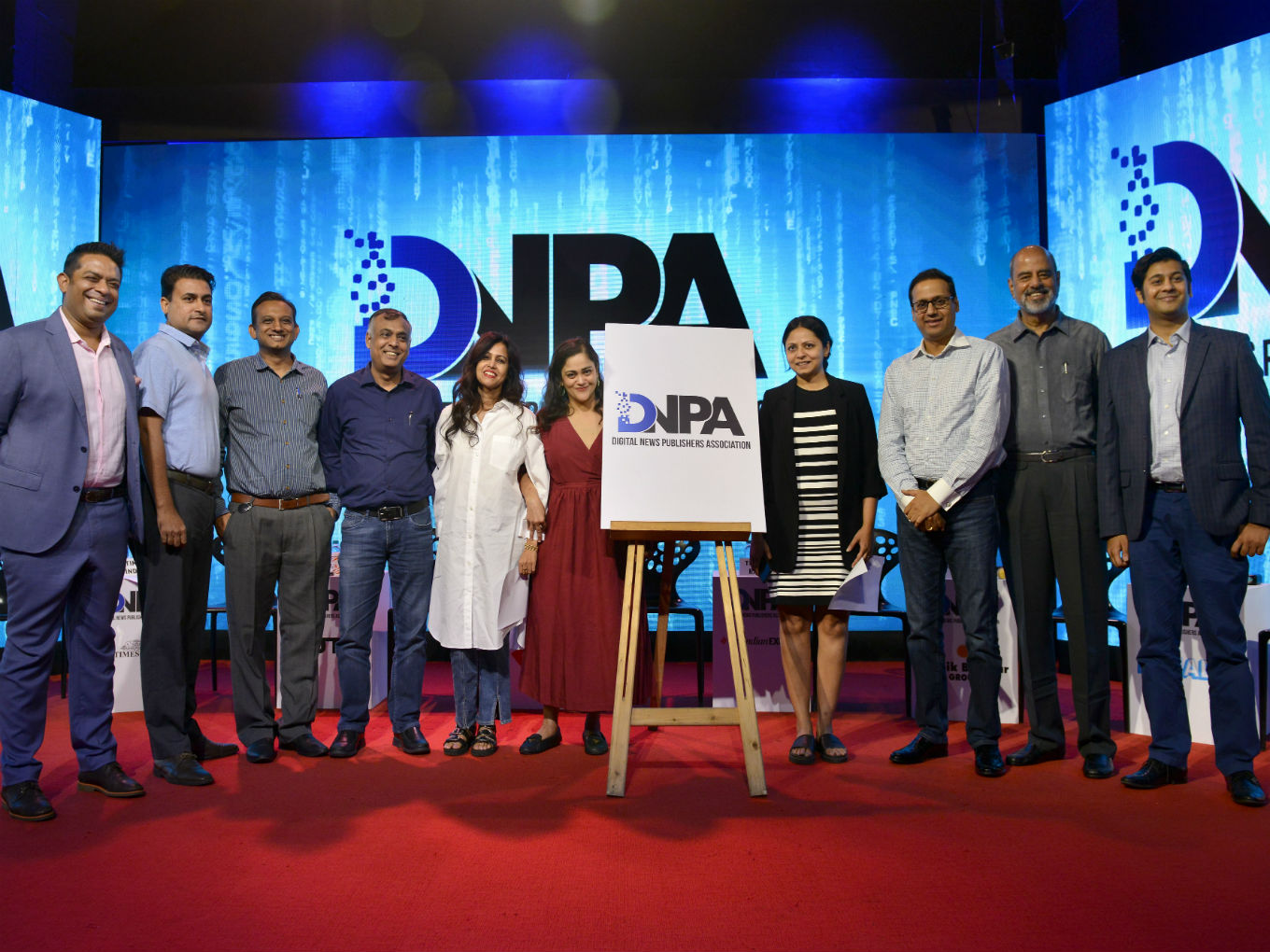 Besides taking self-regulatory measures, the DNPA will work with the government and other associations to promote the digital ecosystem

Amid mounting pressure from the central government, 10 leading media companies of India — Dainik Bhaskar, India Today Group, NDTV, Hindustan Times, Indian Express, The Times of India, Amar Ujala, Dainik Jagran, Eenadu, and Malayala Manorama — on Friday (September 21) came together to launch the Digital News Publishers Association (DNPA). The aim of the DNPA is to work collaboratively on defining, creating, and fostering the digital news ecosystem in the country.

Speaking of the intent behind the launch, Gyan Gupta, CEO of Dainik Bhaskar Digital, said: “DNPA will also explore ways to become a self-regulated body and would also work with the government, industry bodies, and other associations to promote the digital ecosystem with respect to the publishers.”

Interestingly, none of the new-age media companies specially focussed on the digital space such as Medianama, The Print, Scroll, Inc42, and others are part of the founding team. In fact, they seem to be steering clear of the association.

In an email response to Inc42, Nikhil Pahwa, founder, Medianama, said that he doesn’t see the need for such self-regulatory norms to curb fake news at this point in time and so is not in support of the move.

“Every publication has its own norms and editorial practices, just as we do. I don’t see the need for uniformity and a common code just as yet. We are not interested in signing up to a set of norms because that lays the groundwork for formal content regulation norms from the government, and suggests that our freedom of speech, which is restricted under Article 19(2) of the Indian constitution, is open to further control from the government. We don’t see the need for self-regulatory norms at this point in time, so I do not support this idea at this point in time,” said Pahwa.

Self-Regulation Through DNPA: Why Now?

The self-regulation buzz in India’s digital media space is not a recent development. In March, the-then Union cabinet minister of information and broadcasting (I&B), Smriti Irani, had said that there should be an agency to implement a code of conduct — similar to the Press Council of India (PCI) in print and the News Broadcasters Association (NBA) in TV news — for online news, social media, and the overall online ecosystem.

Speaking at an event, Irani had said, “For television and print content, we have already a code of conduct in place under the law. But, online is an ecosystem where legislation in terms of news and legislation in terms of broadcast content material is not very clear. That is something the ministry is currently undertaking in conversation with the various stakeholders.”

Then came a dictatorial decision. On April 2, the I&B ministry issued fresh guidelines, amended to regulate fake news, the accreditation of journalists. As per the amended guidelines, once a complaint is registered for the determination of fake news, the correspondent/journalist or whoever created and/or propagated the fake news will, if accredited, have the accreditation suspended till such time that determination regarding the fake news is made by the regulating agencies mentioned above.

However, amid a huge uproar from across the media industry, the central government withdrew the new guidelines on the very same day. Later in July, the incumbent I&B minister Rajyavardhan Singh Rathore reiterated the need for an online association similar to or on the lines of the NBA, which could self-regulate digital media and curb fake news.

Further, the central government is understood to be drafting new guidelines to make intermediaries — social media platforms — more responsive to blocking fake news. The new guidelines, which will be part of Section 79 of the IT Act will bind social media companies to respond to complaints about fake news content within a few hours.

Clearly, the media industry has been under constant pressure from the government, which is what led to the establishment of the DNPA.

Responding to a question from a media person on how the alliance would work to bring checks and balances to curb fake news, Durga Raghunath, CEO of Indian Express, said that it was the “processes of journalism” that distinguishes news media from an individual who starts something on WhatsApp and that media companies have publishing processes and newsrooms in place to verify information.

“I think, we do want to discuss between us and set norms to respond to the greatest fake news. Politics, I think, has historically proven to be the highest source of fake news. So, when there are big political days, how will news organisations work together? These are all the conversations we are having and will come up with a collaborative way to proactively deal with the norms,” Raghunath said.

According to Puneet Gupt, COO and Business News Head of Times of India Digital (Web & Mobile), the sanctity of news content has to be verified again when the content travels from an original source to a distributed ecosystem.

Why Aren’t Any Digital-Only Media Companies Founding Members Of DNPA?

The 10 media companies that form the DNPA publish news in almost all Indian languages, including English. The association claimed that together they cover 70% of the overall Indian news audience.

However, all the founding companies are traditional, established print or TV media companies, for whom digital is just part of the game. Their focus areas lie somewhere else — either on broadcast or on print.

Strangely, though the DNPA claimed that it is open to all, the founders don’t seem to have invited any new-age media companies with a focus on digital to be founding members. Some such well-known digital-only media companies are Scroll (.in), The Print, The Wire, The Newslaundry, Factor Daily, Quartz and Inc42.

This limits the very purpose of self-regulation in the digital space. “I have been party to informal discussions for forming a digital publishers association in the past…a few instances since 2010. I am fundamentally opposed to this idea of imposing self-regulation. The philosophy that I abide by is that the Internet does not distinguish between journalists and non-journalists, publications and blogs,” said Pahwa.

Unfortunately, “Broadcasters and some online content creators are trying to create a self-regulatory code in line with broadcast, to distinguish themselves from content aggregators and publishers, who, in turn, are trying to do the same to distinguish themselves from blogs. Such moves may end up restricting the freedom of users and are thus potentially regressive,” he added.

Speaking Of Self-Regulation, DNPA Should Take A Cue From NBA and NBSA

Introducing the DNPA as a “self-regulatory body” that will “work with the government” is a throwback to 10 years ago (2007) when the NBA was established with a similar intention — to self-regulate news across its broadcast member companies.

Later, the News Broadcasting Standards Authority was also established in 2008 to check broadcast media companies from spreading fake news. The NBSA, since then, has heard over 600 complaints. However, there has been a series of cases in which media channels accused of spreading fake news have been found guilty but refused to apologise or pay the fine as ordered by the NBSA. Which defeats the purpose of the authority.

Rajat Sharma’s news channel, India TV, which was found by the NBSA as falsifying a Reuters interview as its own, refused to issue an apology. Irony of ironies, Sharma has now gone on to become the president of the NBA!

Similarly, Zee News and Republic News have also refused to apologise for broadcasting false and fake news, as found by the NBSA.

In a post-truth world, when narration sells more than the fact, it’s open and debatable whether establishing the DNPA is the right thing to do or would be an efficient step towards curbing fake news.

Who Will Address The Elephant In The Room — Fake News?

The common sentiment has always been that India being a democratic country where the press acts as the fourth pillar of the democracy, there must not be any regulation that empowers the government to muzzle the media in the name of fixing the fake news plague or anything else.

However, the media, content creators, and aggregators in the country can’t shy away from their responsibilities on this pretext, especially when it has been widely reported how misinformation and lies were fed to US citizens to change the political discourse and narration ahead of the US presidential election in 2016.

What is the view of new-age digital media companies on this? Pahwa is of the opinion that each publication has to be responsible for its own activities. He admits that in their rush to be the first to publish something, digital media publications have made mistakes in the past. “However, we need to distinguish between incorrect reporting and misinformation that is done with an intent to fool the public. I don’t see any association, digital or otherwise, being in a position to prevent or punish such activity,” he said.

In recent months, fake news via social media — Facebook, WhatsApp and Twitter — and online media has been spreading like the plague. However, now that the Internet is out of the dark, looming shadow of Facebook’s Internet (.org) campaign, it’s not only content creators and aggregators but, more importantly, users who need to develop the ability to filter the news and content they consume, laundering it of the muck that comes as along in the form of fake news and misinformation.

And it must start with the government — the Prime Minister, who has been accused of spreading misinformation, the home minister, who wrongly linked a JNU-protest with wanted terrorist Hafiz Saeed — to set an example for the rest of the users.

The article has been written with inputs from Dipen Pradhan.