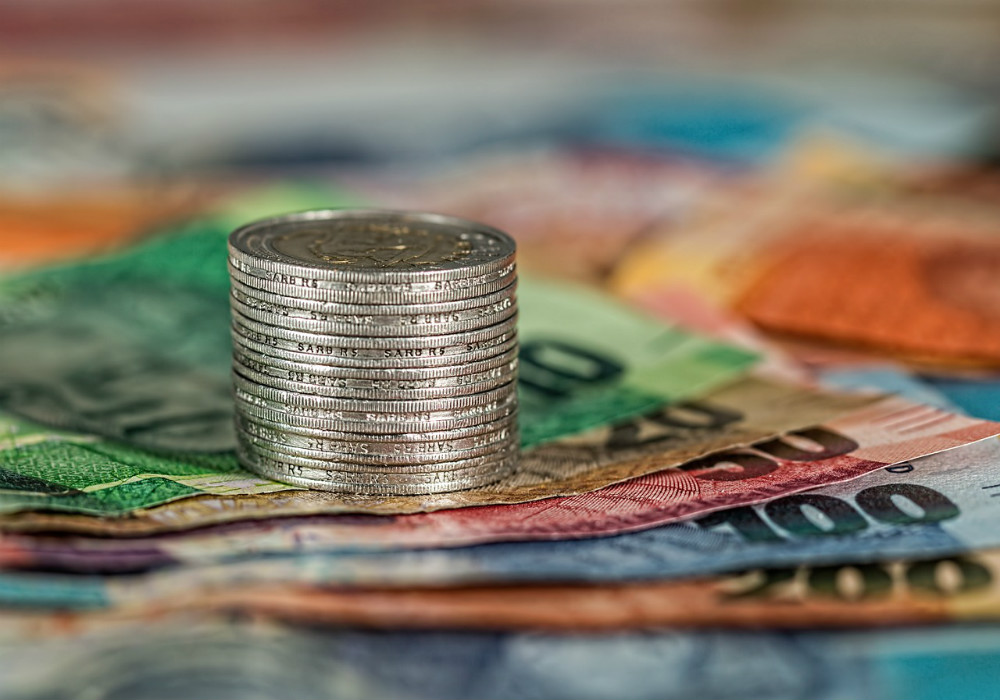 Startups largely live and die by the amount of funding received, and over the past few years, there has been an onslaught of investment that virtually doubled as 2015 came to a close.

But that rock-solid growth began to show cracks in 2016, as the number of startups receiving funds came down by 21% and the amount of fundings received by startups in late stage fell by almost 50%. All in all, 2016 has been the year of late stage funding crunch.

Given this heavy downfall at this crucial stage, we, at Inc42,  sought to investigate these trends over the past 3 years (2014-2016). Having analysed seed funding in startups over the same time period, we wanted to look at the further stages of funding, namely Series A and above. We have considered Series A as a part of this late-stage analysis since it marks the inception of traction and scaling for a startup.

Deals in Series A and late stage rounds were almost 50% each, however, only 21% of the total funding amount was for series A. Around 23% of the deals were $1 Mn to $5 Mn ticket size. The major funded sector was ecommerce with $6.2 Bn in total funding. Around 608 unique investors were involved in late stage, and the majority of them were venture capital funds. Let’s have a look at the trends derived from the same.

Every Year, Every Quarter: The Drop Continues 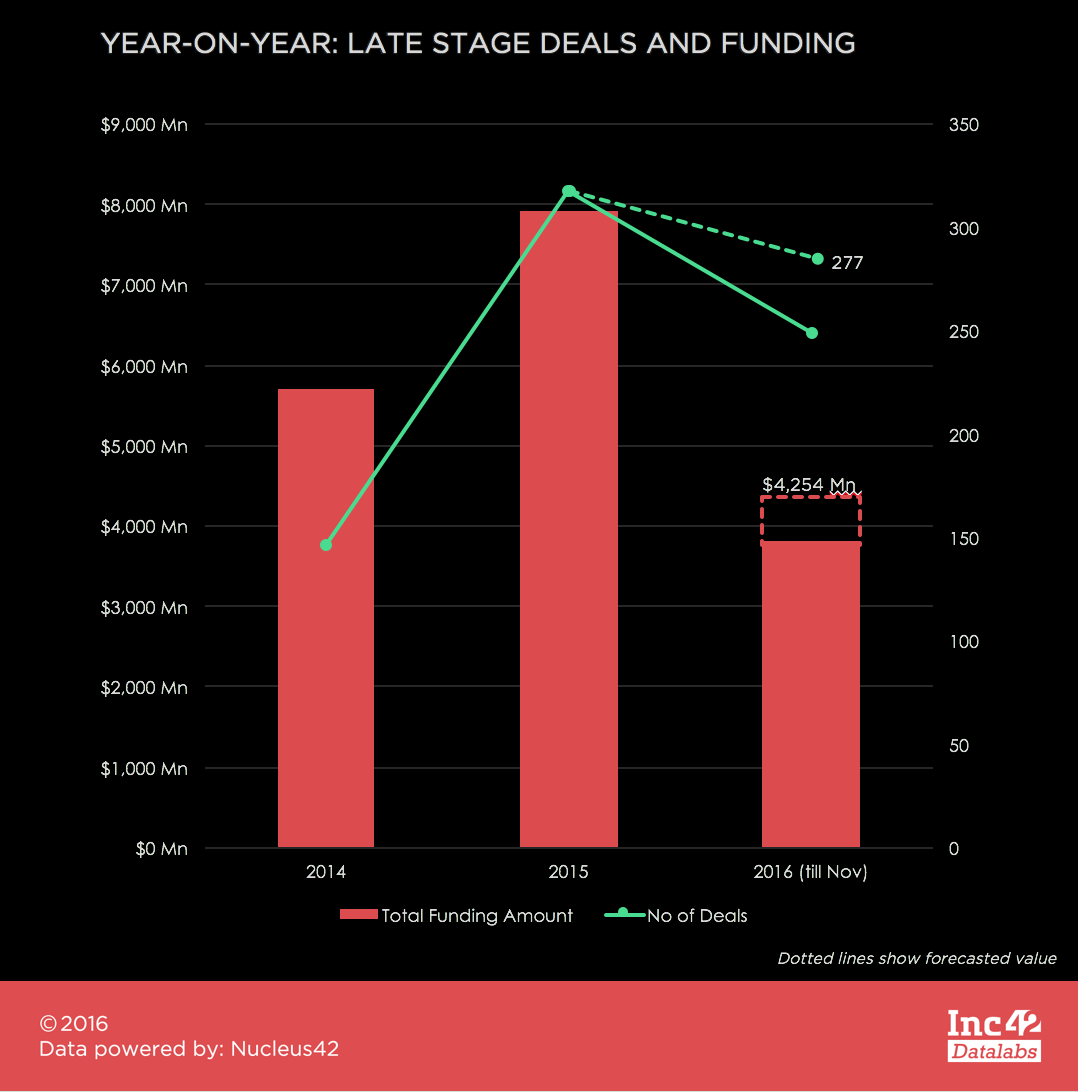 Q3 of 2015 was the most prosperous quarter in the late-stage funding scenario owing to the $2.5 Bn funding received by just eight companies: Flipkart, OYO Rooms, Pepperfry, Saavn, Snapdeal, Inmobi, Paytm and Ola. However, both deals and total funding kept on falling steadily for Q4 of 2015, Q1 and Q2 of 2016. Although the graphs shows a steady gain in terms of deals since Q3 of 2016, there has been little improvement in terms of investment. 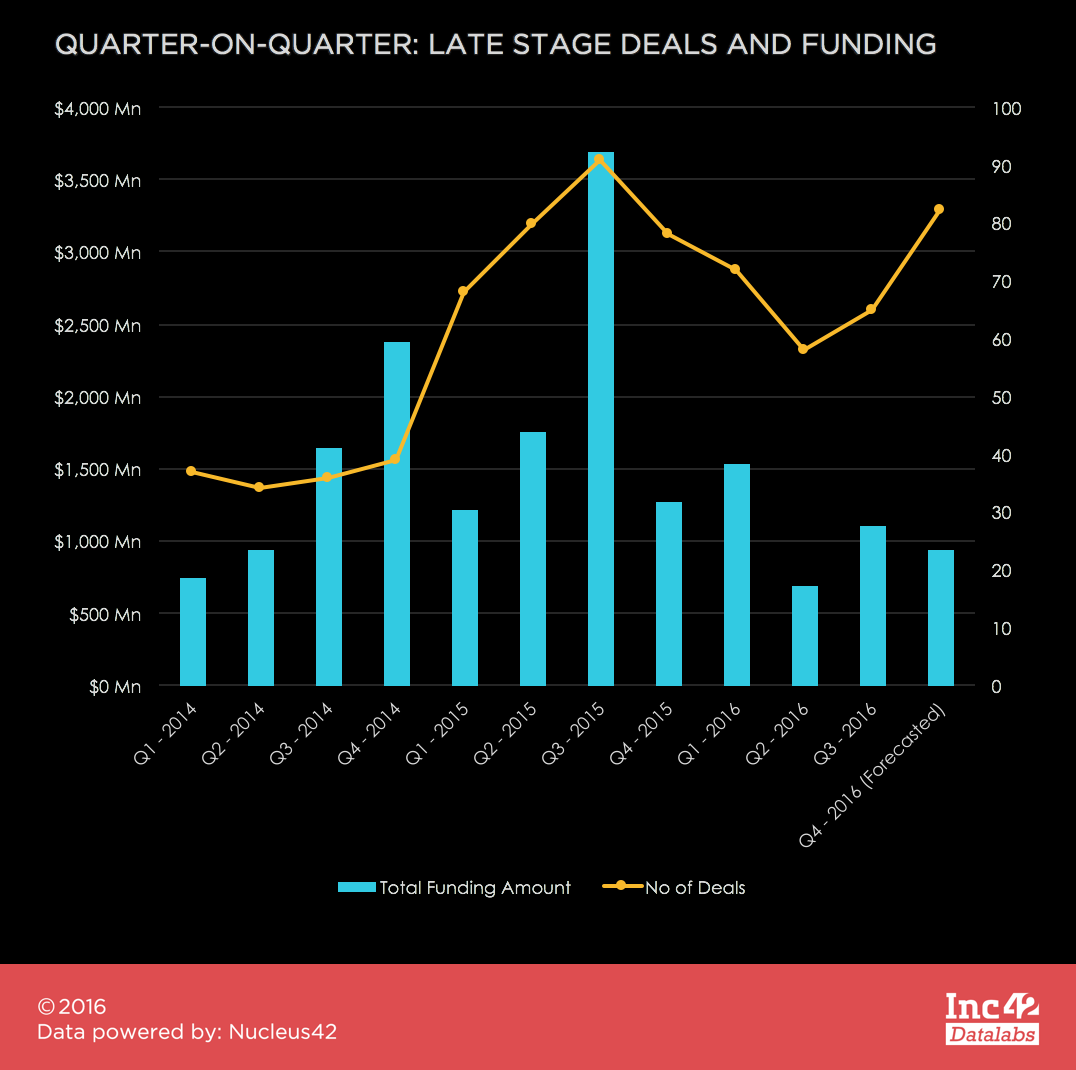 Looking at the stacked graphs of deals and funding in different stages after Series A, we could infer that Series E and above funding seemed to have caught the attention of investors, while, Series A and Series B deals and overall funding seems to have fallen. 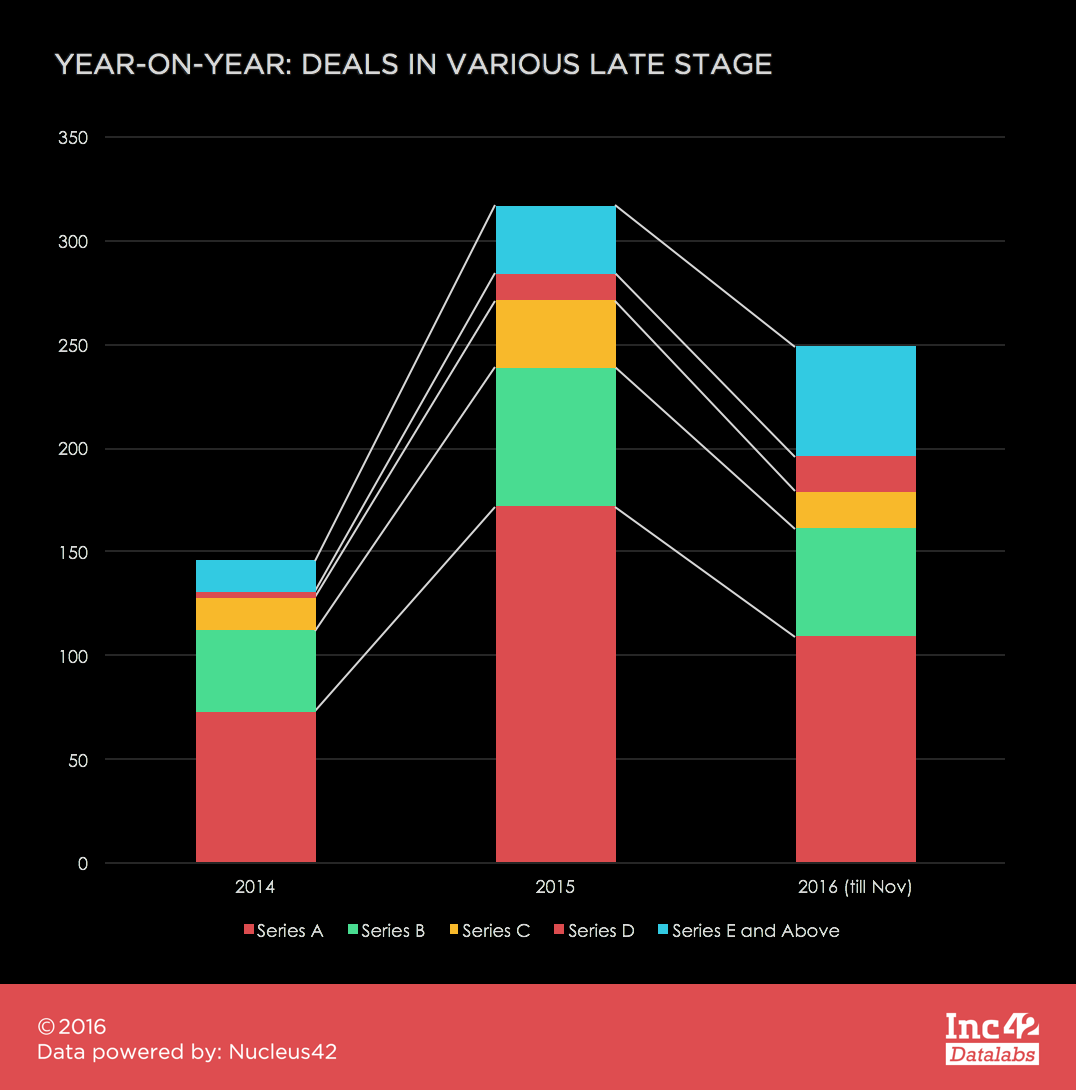 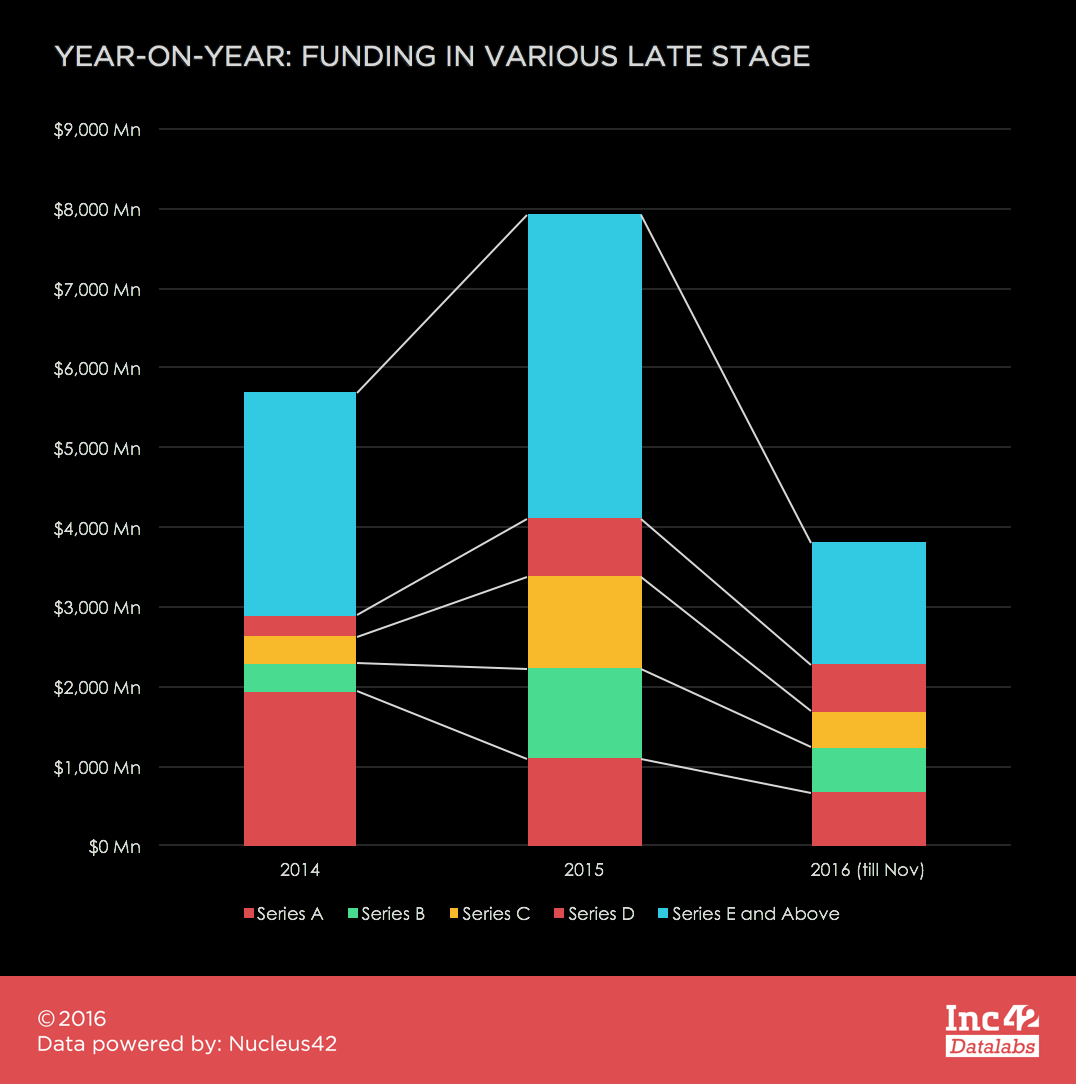 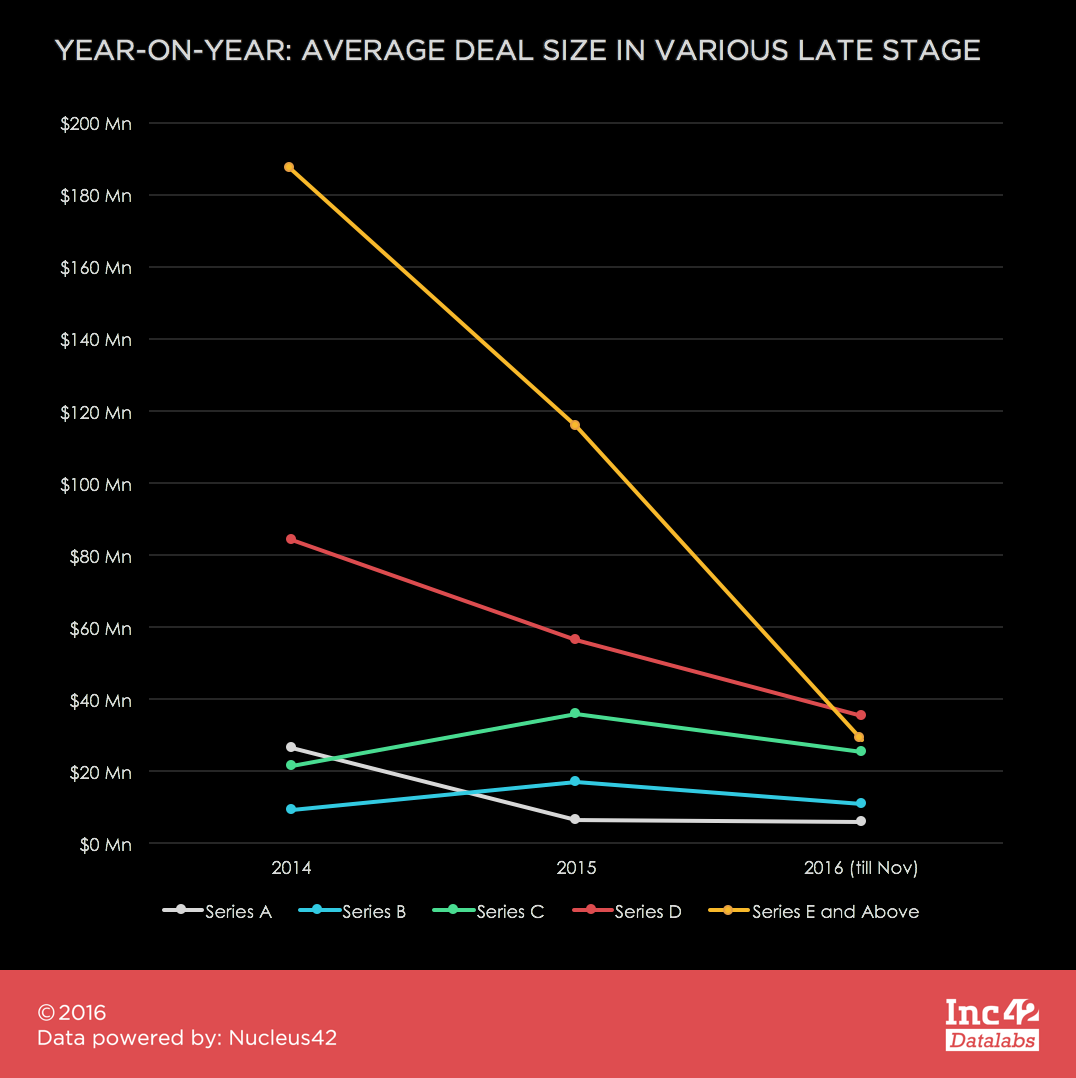 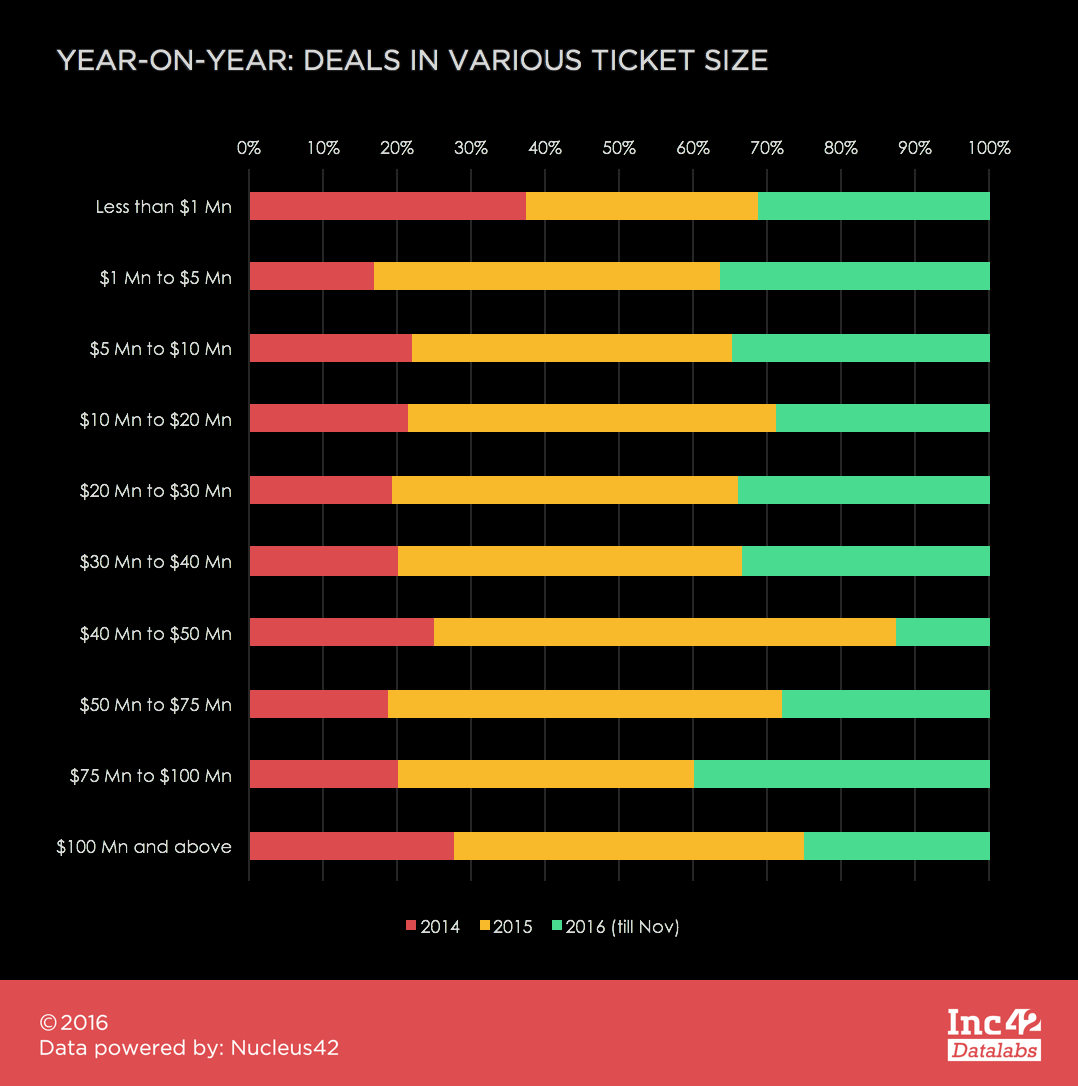 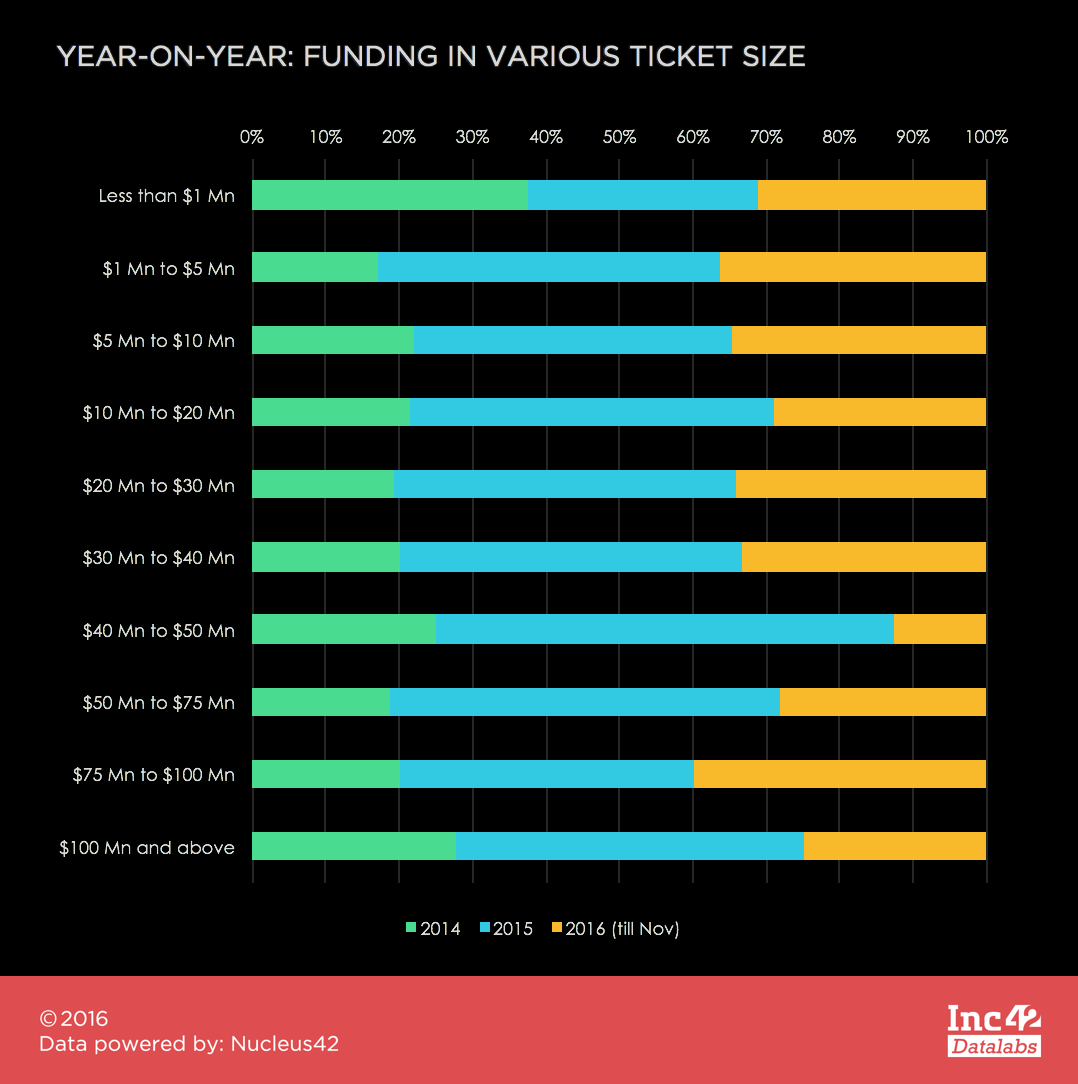 Bengaluru, Delhi/NCR, and Mumbai are the top cities contributing to 91% of the total investment. Chennai, Pune, and Hyderabad were the other significant cities that received considerable late-stage deals. 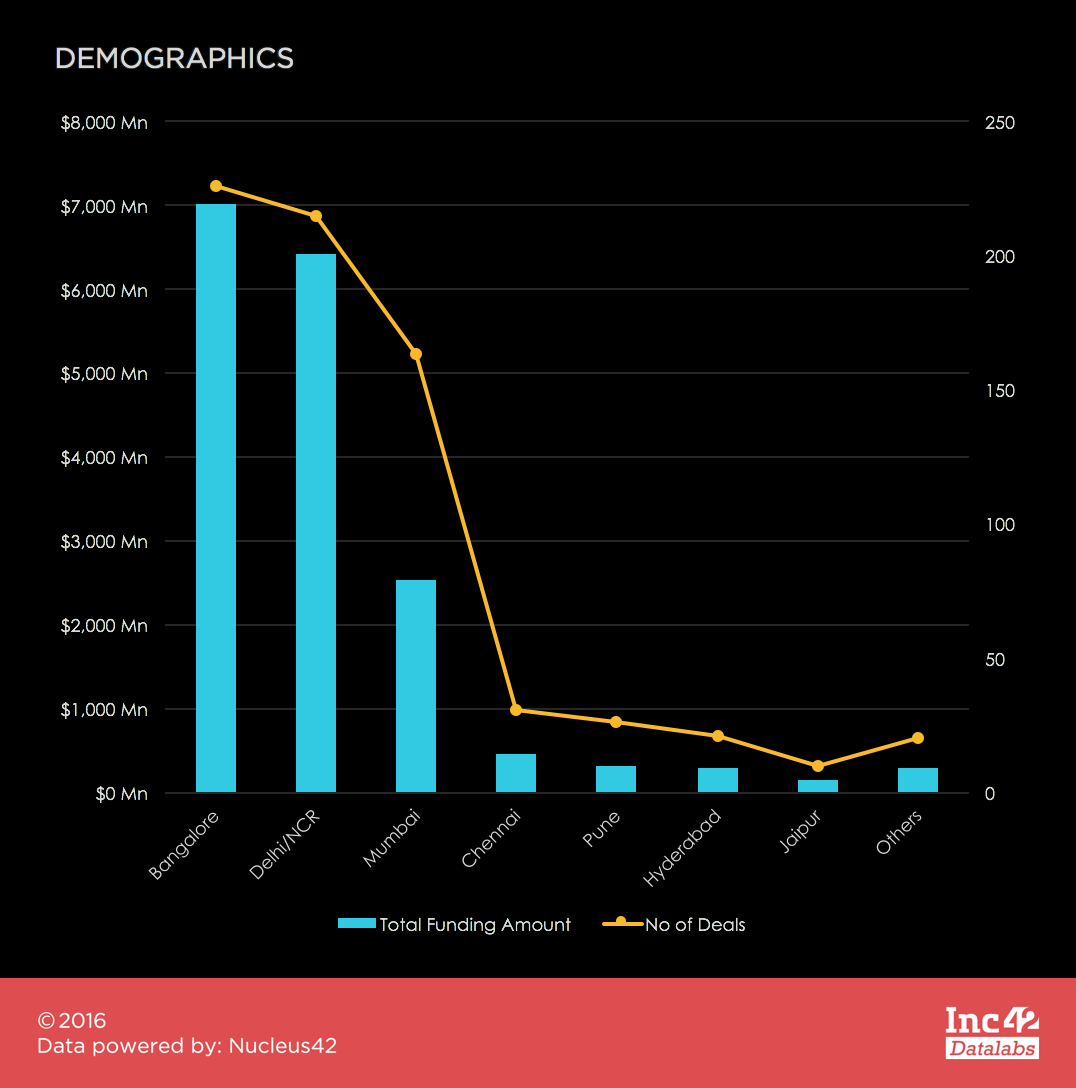 Ecommerce has been the top sector, given the Indian ecommerce market size and potential. Investors have been quite generous to the sector with big tickets like $2.4 Bn funding of Flipkart in 2014-2015 and $627 Mn funding of Snapdeal in 2015. Fintech, traveltech, healthtech, SaaS, and enterprise followed closely. 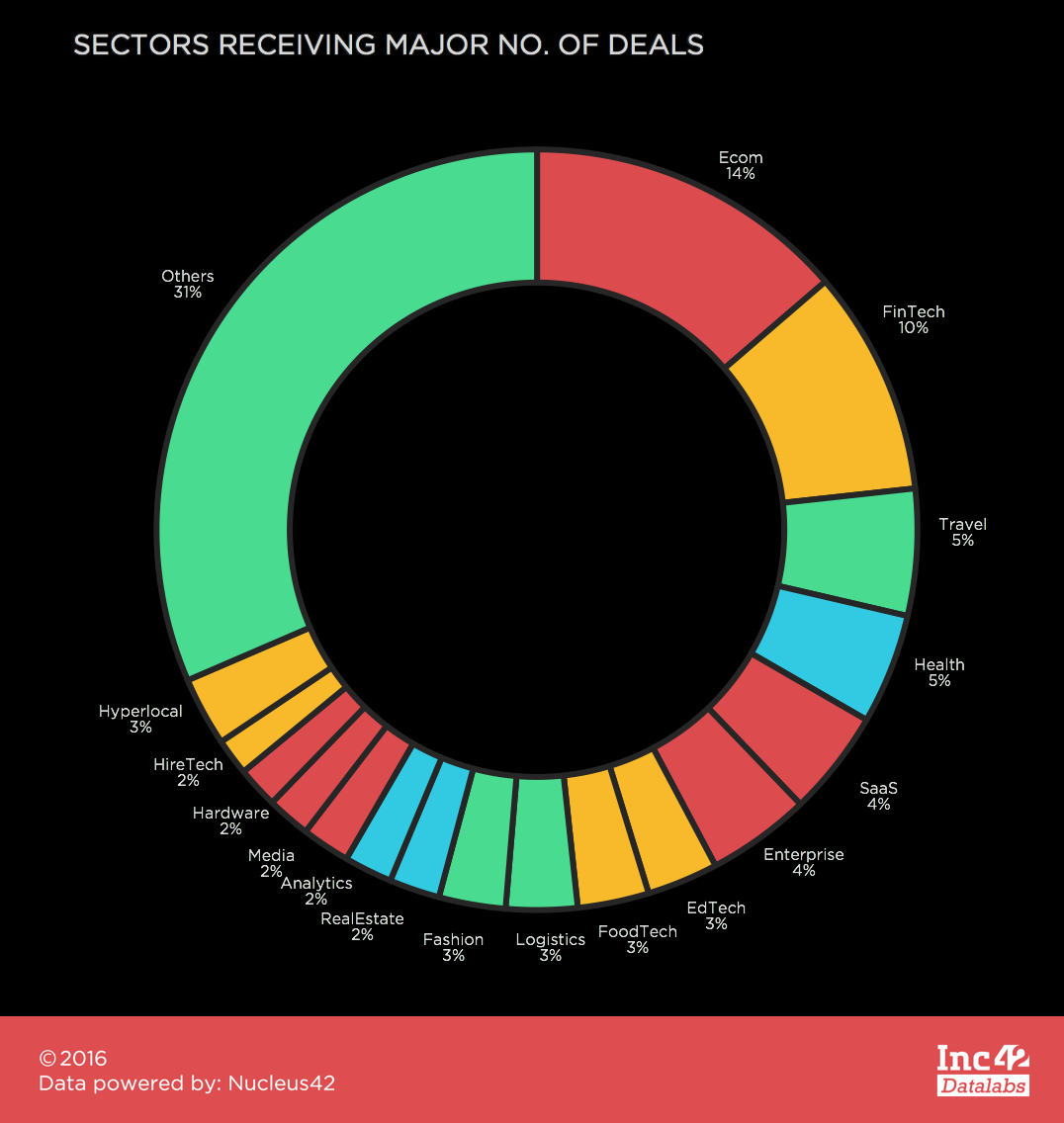 Unlike in seed funding rounds, the number of investors in the late stage has been steadily increasing, confirming that since the so-called bubble burst of 2015, they are more guarded in investing big money in the early stages of a company. Major big tickets are in the rounds of Series A and later stages. 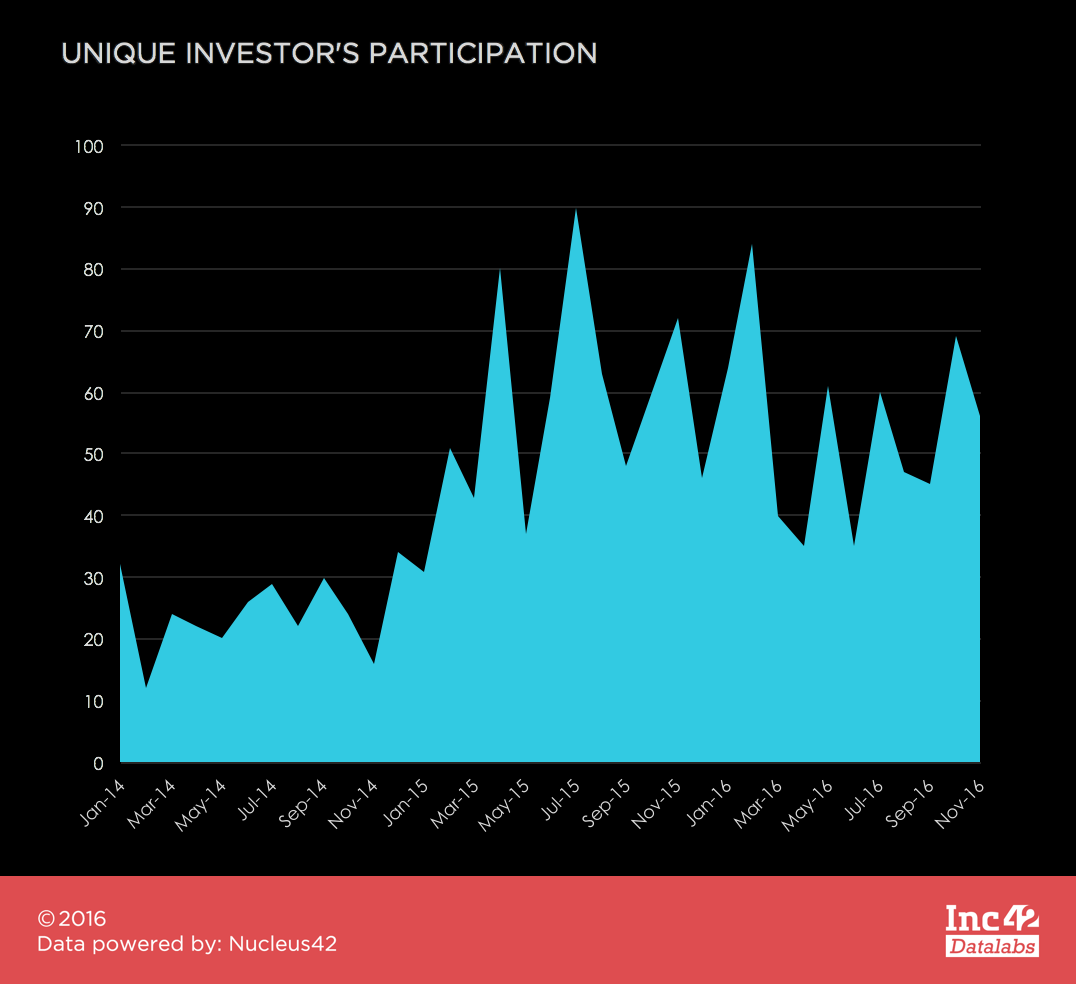 The majority of investors that took part in the late stage rounds were VCs. Sequoia Capital, Tiger Global, Accel Partners, SAIF Partners, Kalaari Capital were the top investors with the most number of deals. 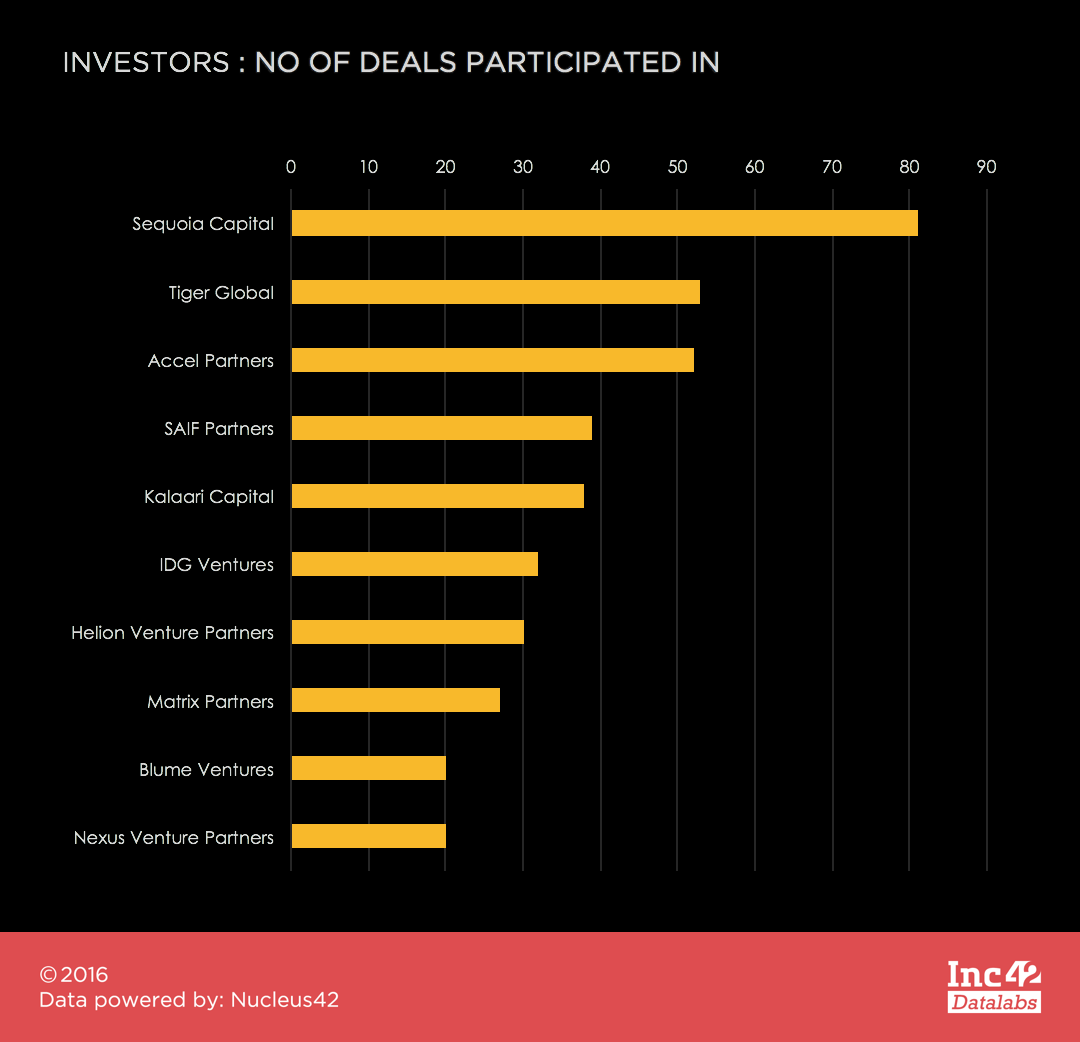 Sure, there is a noticeable funding crunch in late stage funding since Q4 2015. However, things have started to look up after Q3 2016. 54 deals at the late stage have already happened in the month of October and November. With increasing participation of investors, the forecast suggests a definite improvement of the funding scenario in the month of December, leading to a brighter 2017.