Archaic Regulations Come In The Way Of Startups Again; Knowlarity’s Services Shut Down In Delhi By A Telco

Archaic Regulations Come In The Way Of Startups Again; Knowlarity’s Services Shut Down In Delhi By A Telco

Cloud Telephony startup Knowlarity was in a rude shock over the weekend after its services in Delhi were shut down by the Telecommunication Department without a notice. At first the startup thought that it was an outage from a Telco provider but later it dawned on them that the department had instructed the Telco to shut down the services to Knowlarity on the basis that the AudioTex license written in 1995 does not allow call forwarding.

Shantanu Mathur, Country Head of Knowlarity told Inc42, “Our services were shut off without any warning or notice.  Out of the blue, the DoT official told us that call forwarding is not allowed on AudioTex license while we are doing nothing different from other cloud telephony companies.”

The startup took no time to approach the Telecom Disputes Settlement and Appellate Tribunal (TDSAT) for redressal. Shantanu added, “The court was swift enough to give us a reprieve in the form of a stay order against the ad-hoc decision made by Telecom department cell.” 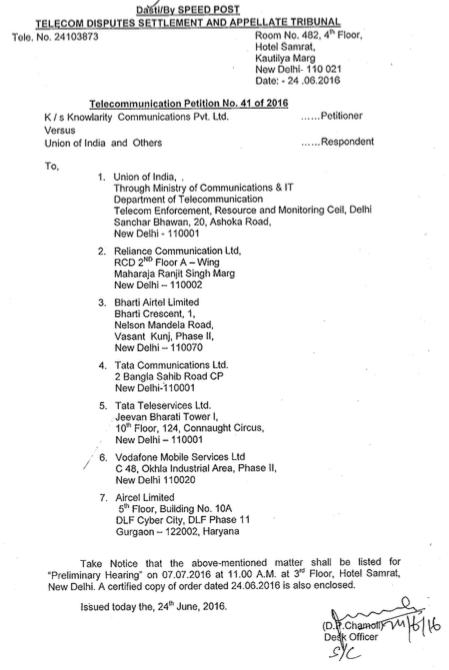 Meanwhile, the startup is managing to run 70-80% of its operations as one data centre has been completely affected by the shutdown. However many SMBs which use Knowlarity’s services have been affected by the outage.

Founder Ambarish Gupta, in a Medium post stated that the telecom department officials had told the company that it cannot run some of the features of their service like ‘call-forwarding.’ It was told that the current licences available from the DoT do not cover such a service. Even though Ambarish tried explaining to the authorities that these licenses made almost two decades ago were archaic and Telecom Regulatory Authority of India (TRAI) has already come out with a consultation paper on revising them.

Says Ambarish in his post says how he tried to explain his position to officials on how illegality of call-forwarding solution means that enterprise telephony industry in India is illegal. He says,

“It was very uncomfortable. I had difficulty explaining the details to him. I was thinking of the 12,000 business — the e-commerce companies, cab companies, the small business, the hospitals and schools that use our services and improve their productivity. Indian small business do not use much of enterprise technology. Their productivity is much much lower than that of developed world SMB. We are the first company selling these small businesses simple technology that can help them increase their revenue by tracking their customer communications on phone calls. They have come to depend on these tools. Even a five minute outage would lead to massive business losses for them. I explained that to him. I explained our product architecture and how calls flow — calls remaining on copper wire so that we can confirm to the regulations. How it is an essential service for so many businesses. And how we developed our own telephony architecture around remaining compliant. I am not sure how much he grasped.”

However, no amount of reasoning with the DoT officials worked. Ultimately the company had to approach TDSAT on 24rth June and immediately got a stay order against such ad-hoc and unjustifiable disconnection of services. A small glitch in the way court proceedings went, meant that instead of “Stay and reconnect” Knowlarity only got “Stay”. Hence it will be approaching the court today again to get this fixed. 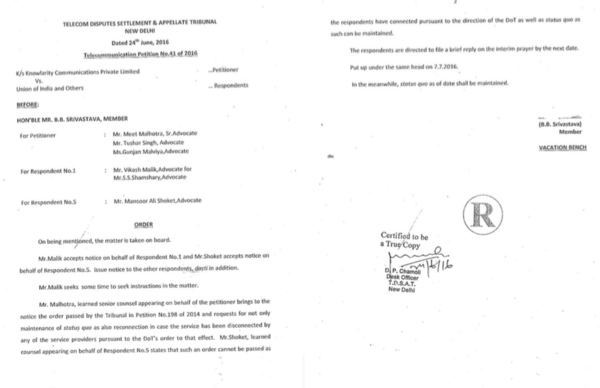 On account of the outage, about 12,000 of Knowlarity’s customers’ phone numbers have got disconnected. The firm said many of these customers include small businesses, ecommerce firms, cab companies, hospitals and schools who do not use much of enterprise technology. As per the startup, their platform costs less than one-tenth of the traditional equipment sold by large multinational companies. Hence even a five-minute outage leads to massive business losses for these.

Adds Shantanu, “It would take one word from the DoT official and only half an hour to fix this. But in the meantime, crores of money is being wasted.”

As some operators’ telephone numbers in Delhi data centre continue to remain disconnected, the startup has been working day and night to provide an alternate solution to its customers. Many were given an alternate numbers and others are routed to other telecom operators or locations. Most of the employees spent pretty much all night to transfer the traffic to alternate routes using manual methods. Knowlarity’s tiff with DoT officials again brings to light the impediments posed by archaic regulations in the way of startup India. Shantanu added that the TRAI regulations regarding the Audiotex license are a grey area and do not explicitly disallow call forwarding. Essentially AudioTex license doesn’t cover call forwarding and bridging, even though these are key features of Knowlarity’s SuperReceptionist product. He also adds that one of the objective of regulations was to prevent revenue loss for operators, which in Knowlarity’s case is not the issue. He added that Knowlarity’s processes add to telecom operators revenues for both incoming and outgoing calls.

Meanwhile, it is receiving much support from businesses who continue to support its services. In the next 14 days, it will be fighting to prove that “what Cloud Telephony does in India is both legal and useful.” Contrast that with Knowlarity’s global competitor US based Twilio Inc. which raised $150 Mn in its initial public offering last week.

But the bigger issue here is when will archaic regulations pave way for smarter ones to be in sync with the advances in technology so that they can fully support the spirit of Startup India? Now the point of constention is that Knowlarity’s SuperReceptionist service allows call bridging, something which is not allowed for in the outdated Audiotex license which in clause 30.6 disallows point-to point conferencing. But then again, the shutdown comes at a time when TRAI is taking another look at the outdated license. And more so, it was affected without giving the company the mandatory notice period of 60 days to rectify their services.

As per Ambarish’s discussion with the officials point out, the official stated that there is no license which allows cloud telephony as an industry. Which brings one to wonder then how come cloud telephony companies were allowed to startup and build a customer base in the first place? Obviously, it is clear that reevaluations of old laws is much needed to make way for legitimate business cases of cloud telephony. That is probably not something which can be done in a fortnight but the efforts need to start right away to avoid such a tussle between startups and regulators in the future.