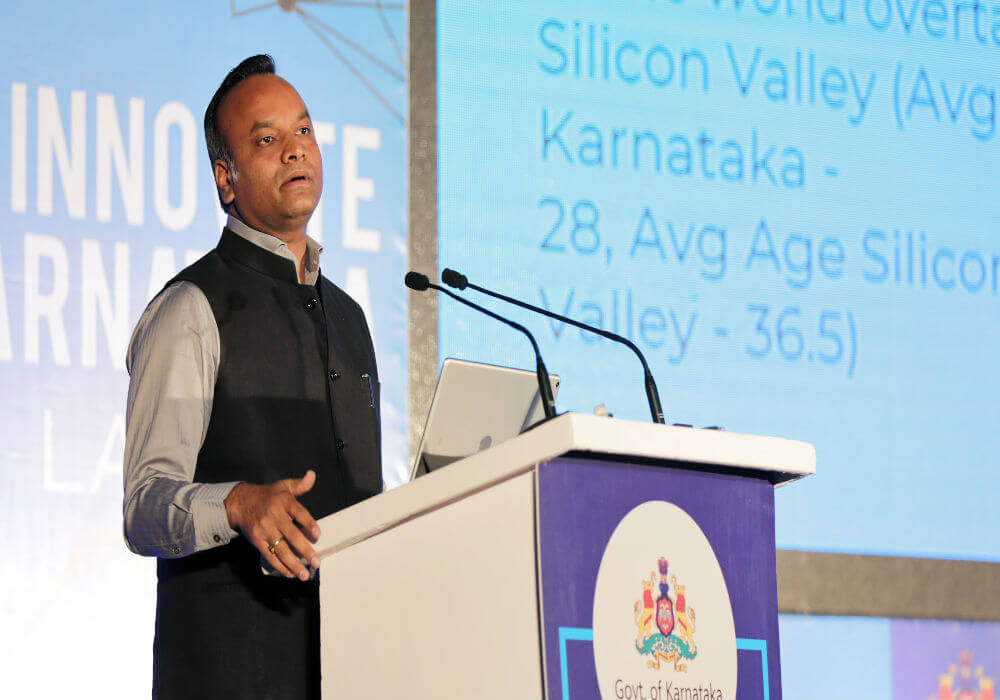 In a step forward to make Karnataka a global choice for innovation, Karnataka Chief Minister Siddaramaiah has unveiled Innovate Karnataka. It will act as an umbrella brand for technology innovation in the state.

The vision of Innovate Karnataka is to see Karnataka as a global first choice of innovation and technology by adopting policies which spur 100% digitisation of health, agriculture and other domains and enable inclusive digital growth across geographies and all strata of society.

The brand will oversee innovation in emerging technologies such as blockchain, robotics, artificial intelligence (AI), big data, nanotechnology, among others d in the startup ecosystem of the state.

During the launch, CM Siddaramaiah said, “Development cannot happen without innovation and no innovation is truly big unless it helps people. With Innovate Karnataka, we hope to start on the path to Mission 2025: where technology will help in the inclusive development of the state, where better governance can be delivered to the citizens.”

The programme will be spearheaded by the Department of Information Technology and Biotechnology.

Speaking on the occasion, Priyank Kharge, the IT Minister of Karnataka, said, “We are spearheading the startup movement in India and ensuring that we’re at the forefront of blockchain, nanotechnology, artificial intelligence innovation. Now, it’s time to take Karnataka into a safe and secure future where technology solves real problems.”

Addressing the employment in the state, he added that this will require a large scale reskilling of the current and future workforce.

With ‘Innovate Karnataka’, the state government has also launched several Centres of Excellence (CoE) across Karnataka.

Two other projects of $613.6K (INR 4 Cr) were launched: an Electronics System Design and  Manufacturing (ESDM) Cluster was announced for Mysore and a Very Large Scale Integration (VLSI) Incubator in Hubli.

Two other portals viz Yuva Yoga and e-Margadarshi were also launched. TheYuva Yuga portal will act as the one-stop-shop for all the information related to the state’s skill development programme and the e-Margadarshi will help the youth who are looking for employment to fulfill their dreams.

Karnataka has been striving towards technology development and growth of the state in the growing startup ecosystem.

Recently in February, Kharge had introduced a white paper on blockchain technology. Based on the winning ideas from the Blockchain Hackathon, organised earlier this year, the white paper will set the roadmap for the blockchain implementation in e-governance, he informed.

One of the other initiatives of the state government include ELEVATE 100 programme. It is a combined initiative of the Startup Cell, Karnataka Biotechnology and Information Technology Services (KBITS) Government of Karnataka.

Under the Elevate 100 programme, the state government had shortlisted 112 startups for the incubation, granting access to the government’s $62.5 Mn cumulative startup fund as well as mentoring from industry experts, idea validation, advisory and legal support.

In February itself, Gaurav Gupta, Principal Secretary, Ministry of IT/BT, Karnataka announced the setting up of startups helpline as well as a dedicated portal to address the growing queries of startups in the state.

He added, “We have already registered 7K startups and we aim to have 20K startups within the next few years.”

At present, Bengaluru is leading the baton of Startup India initiative by the Central government. In the booming startup ecosystem, the state has been boasting about technology innovation from quite some time.

Recently, the reports surfaced that Bengaluru will soon host Heli Taxis. With this, two Bell 407 helicopters will fly passengers from Bengaluru’s Kempegowda International Airport to Electronic City, Phase 1 and to HAL Airport.

Also, the latest reports have suggested that Bengaluru will soon have its own Newyork style- Times Square. The reports suggested that famous Church Street will host ‘Bengaluru Square’ and the junction between Brigade Road and Residency Road will be vehicle free on Saturday and Sunday.

In the already booming technology state of the country, it is to be seen what new initiatives and benefits arise for the startups with the launch of Innovate Karnataka project.